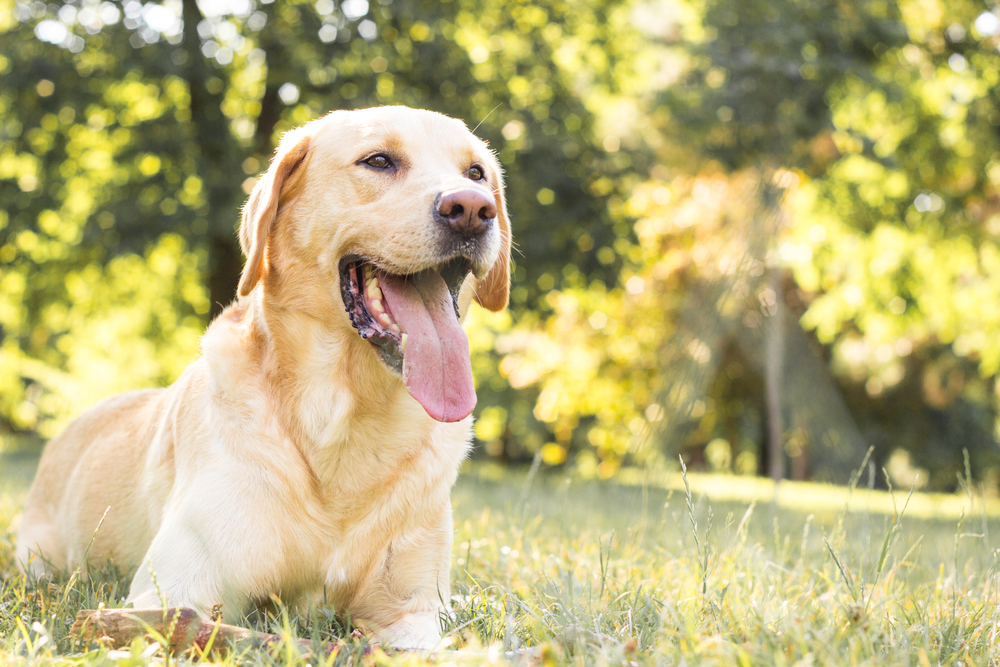 Finding a unique dog is exciting and certainly highlights the diversity within the canine family. Dogs can stand out because of their size, coat, and coloration.

Sometimes they have a specific characteristic like blue eyes or a pink nose that makes them distinguishable from other typical canines.

Pink-nosed dogs are certainly few and far between, which makes them even more special to find. While some dog breeds are born with pink noses, others have noses that turn pink as they age or pink in cold weather. Below, let’s learn more about these 18 dogs with pink noses. 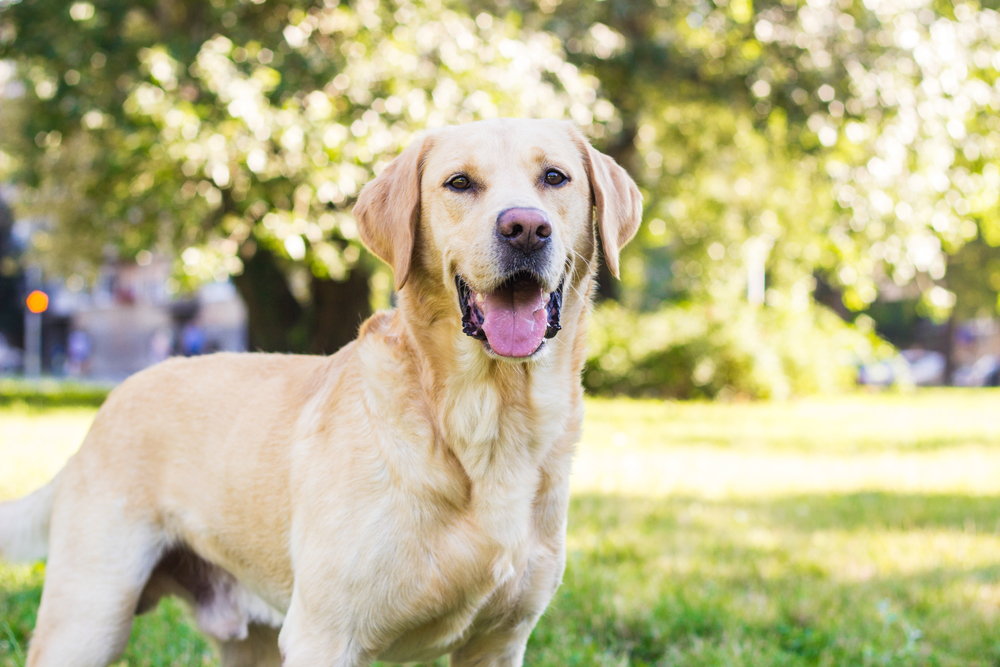 Arguably one of the most popular dogs globally, the Labrador Retriever is a loving, loyal, and intelligent companion. This dog comes in several coat colors, including yellow, white, black, and brown.

Although many Labrador Retrievers have a black nose, this dog can develop a pink nose over time. Dudley Nose, a common condition that develops in certain dog breeds, can cause the pigmentation in the nose to turn pink.

Scientists aren’t exactly sure why a dog’s nose will turn pink, but usually, there are no underlying health conditions to trigger the change. Pink noses in Labrador Retrievers seem to occur in every coat color variety. 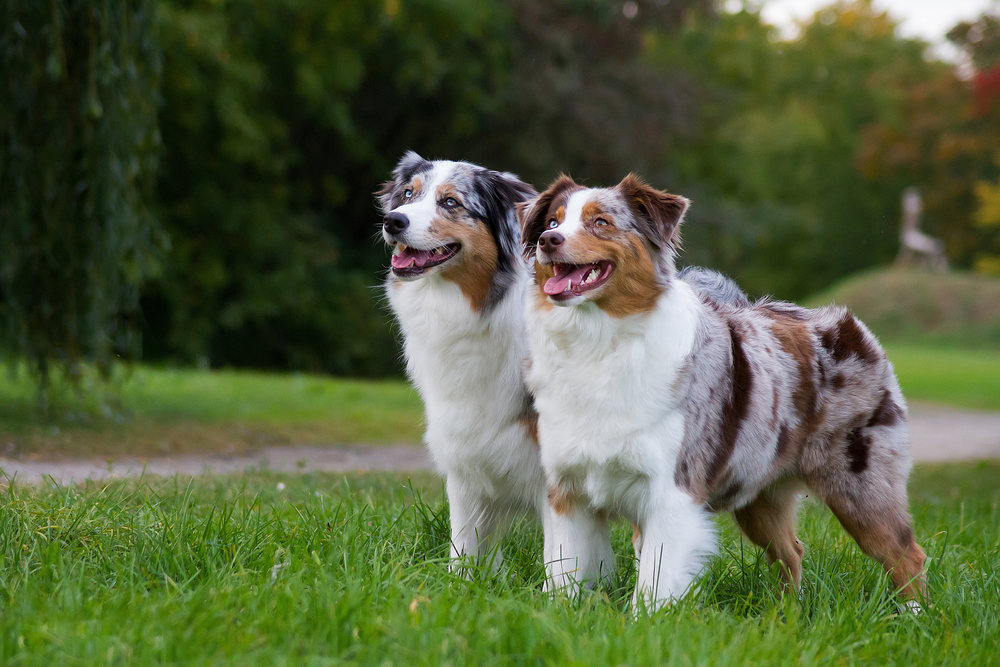 The Australian Shepherd is a medium-sized, high-energy dog that is intelligent and built to work. Despite its smaller size, this little dog loves to work and is well-suited for farming or herding.

Many owners are attracted to this dog because of its incredible marble coat coloration, including specks of white, gray, black, and blue.

The Australian Shepherd can also have different nose colors, including a pink or liver-colored nose or a Butterfly Nose. The Butterfly Nose is a mix of pink and black, which commonly occurs in puppies.

Although this is a smaller dog, the Australian Shepherd needs plenty of exercise and room to explore and is best not kept in apartments or condos. 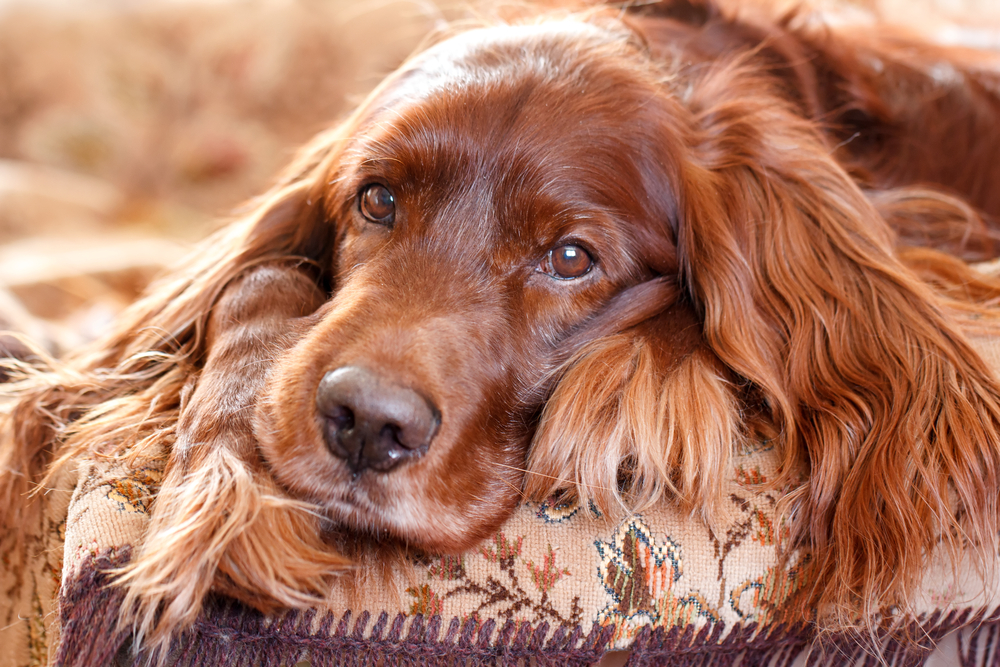 There is much to love with an Irish Setter. Between the stunning, silky red coat and the friendly disposition, this dog is sure to turn heads and mold a permanent place in your heart.

The Irish Setter can be a large dog, standing nearly two feet at the shoulders. It has trademark long and silky red fur and can even have a pink nose. Plus, the Irish Setter is a popular dog for families because it is loyal, protective, and friendly.

Like many other dog breeds, the Irish Setter can carry a recessive gene to cause the liver coloration, which sometimes manifests as a pink nose. 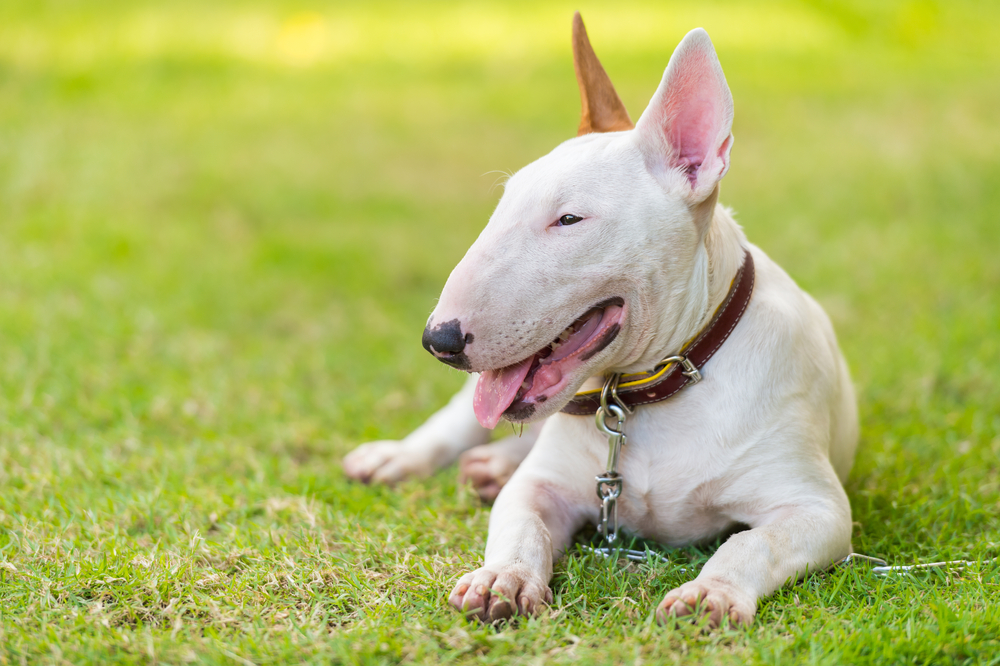 The Bull Terrier is easily recognizable with its egg-shaped head and short, stout body. Usually weighing between 50 and 70 pounds and reaching about 20 inches at the shoulder, the Bull Terrier is a large breed dog.

This dog is known for its mischievous personality, always playing the class clown. While this dog is not recommended for families with multiple dogs or other animals, the Bull Terrier can make a wonderful family pet, sure to provide years of entertainment and companionship. 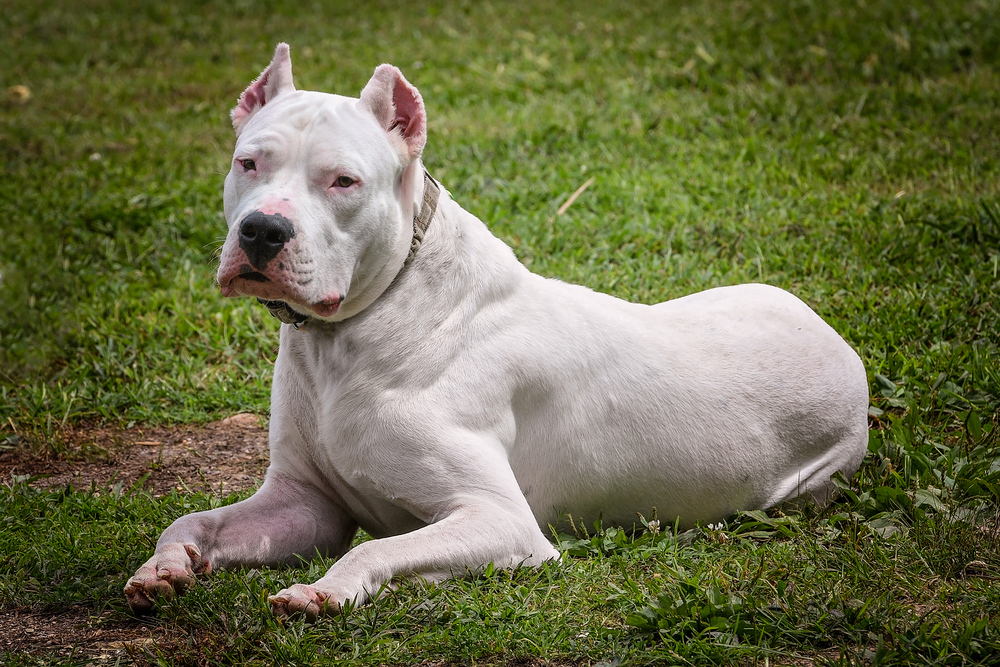 This large breed dog is incredibly athletic and strong and has been bred to work as a hunting companion, assisting hunters with their quarry. The Dogo Argentino can weigh between 80 and 100 pounds and is often over two feet at the shoulder.

This dog is easily identifiable with its trademark stark white coat with short hair. Although this dog usually has a black nose, certain dogs will develop tiny flecks of pink on the nose, giving some dogs a Butterfly Nose appearance.

The Dogo Argentino is best kept for an experienced dog owner that can provide the proper training and exercise for this large breed dog. 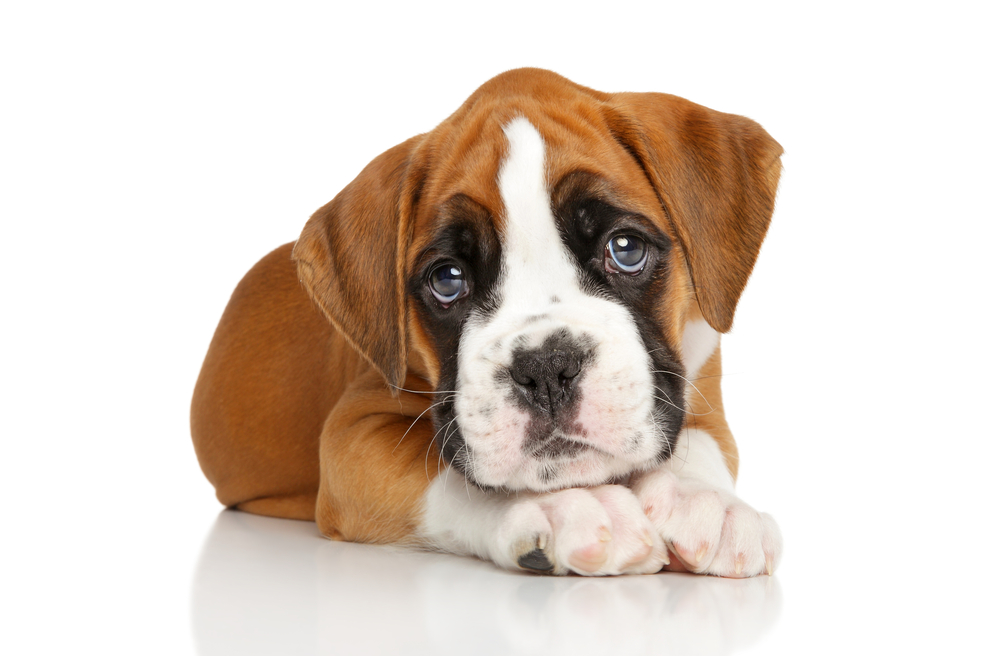 Boxers are one of the most popular family dogs and for a good reason. This dog is intelligent, loyal, and affectionate and has plenty of energy to entertain young children.

The Boxer is happy to spend the day playing silly games or cheerfully joining on a family walk or hike to the local dog park.

Many coat colorations are acceptable for the Boxer, including brindle, fawn, black, and white. Although most adult Boxers have a black nose, many puppies will have a bright pink nose. As the Boxer ages, the pigmentation in the nose will slowly turn black. 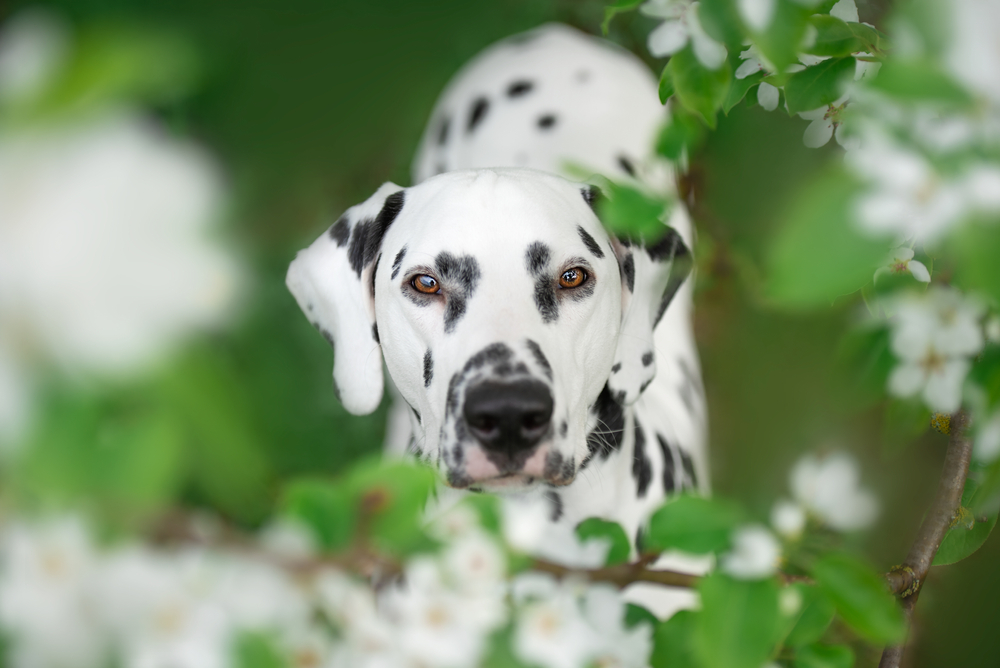 Weighing up to 70 pounds, the Dalmatian is a large dog with easily recognizable black or liver spots. The Dalmatian was traditionally used to accompany a coach and today has firmly rooted its position as a firefighter’s best friend.

The Dalmatian is loving, loyal, affectionate, and highly athletic. While most Dalmatians have black spots, some have liver spots.

Due to the recessive gene that causes liver spots, this dog can have an entirely pink nose or a Butterfly Nose half black and half pink. 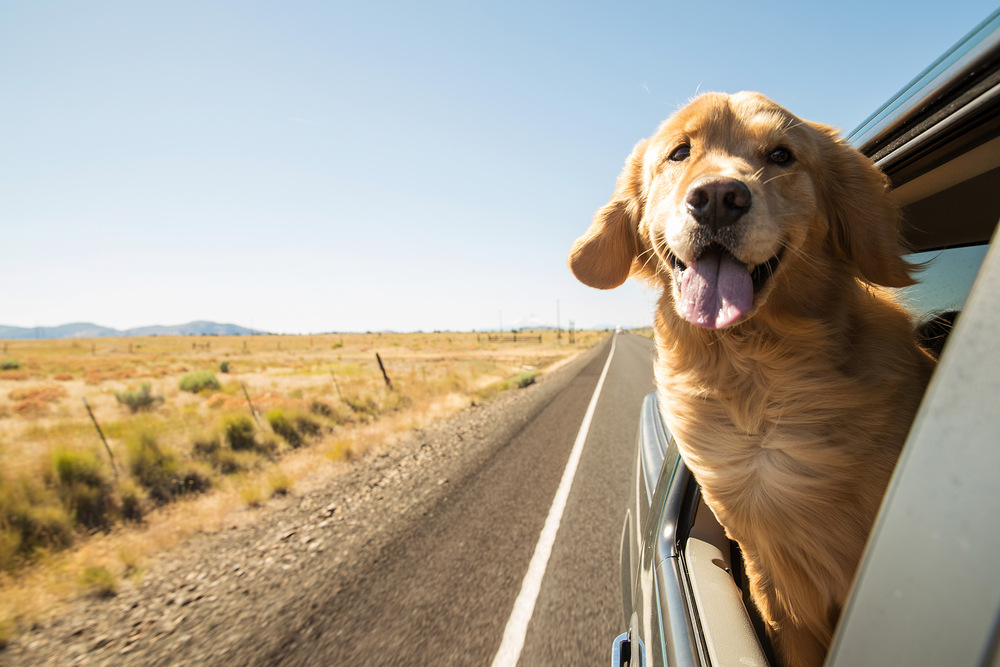 Easily one of the most loved and popular dogs in the world, the Golden Retriever makes our list of dogs with pink noses because it sometimes sports a lighter-colored nose, depending on the weather.

Snow Nose is a condition in which the nose turns a lighter color, like pink or light brown, when the temperature drops. This reaction is called hypopigmentation and is entirely harmless for your pet.

If you notice your normally black-nosed Golden Retriever suddenly has a lighter nose, it may be a good indication that the temperature is dropping outside. 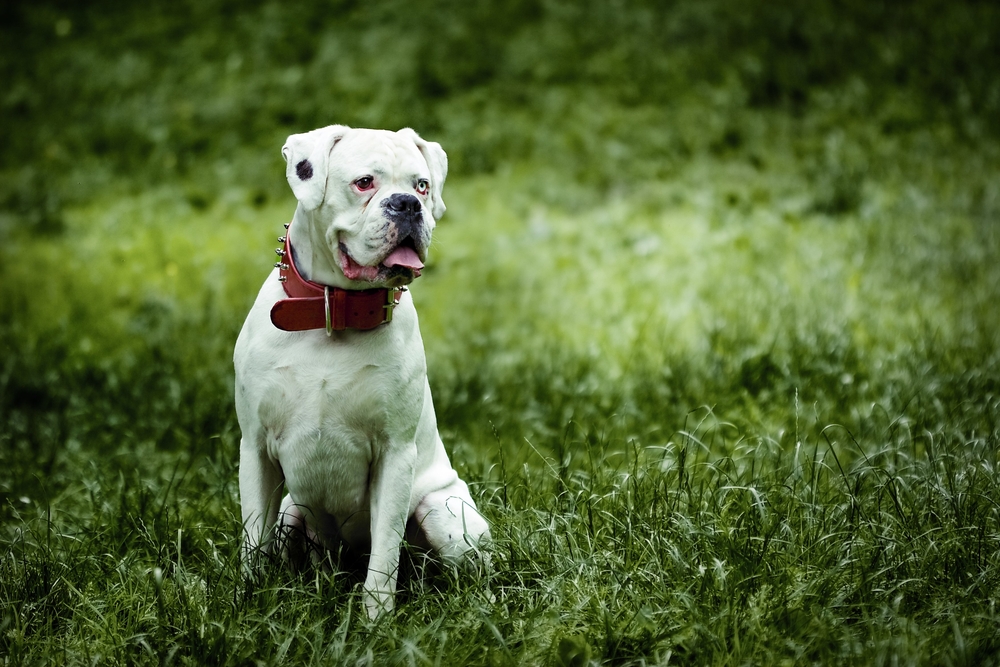 Although the standard Boxer has made our list since most Boxer puppies have a pink nose, the White Boxer will usually keep its pink nose coloration throughout its adult life.

White Boxers are incredibly rare, and many breeders view white boxers as a defect in the breeding line.

Unfortunately, deafness is also closely associated with White Boxers, with nearly 30% of all White Boxers deaf. Still, deaf dogs are just as lovable and trainable as other dogs.

White Boxers lack pigmentation in their coat and usually have bright pink noses to complement their beautiful white coloration. Adult White Boxers will have a pink nose with small black spots in some cases. 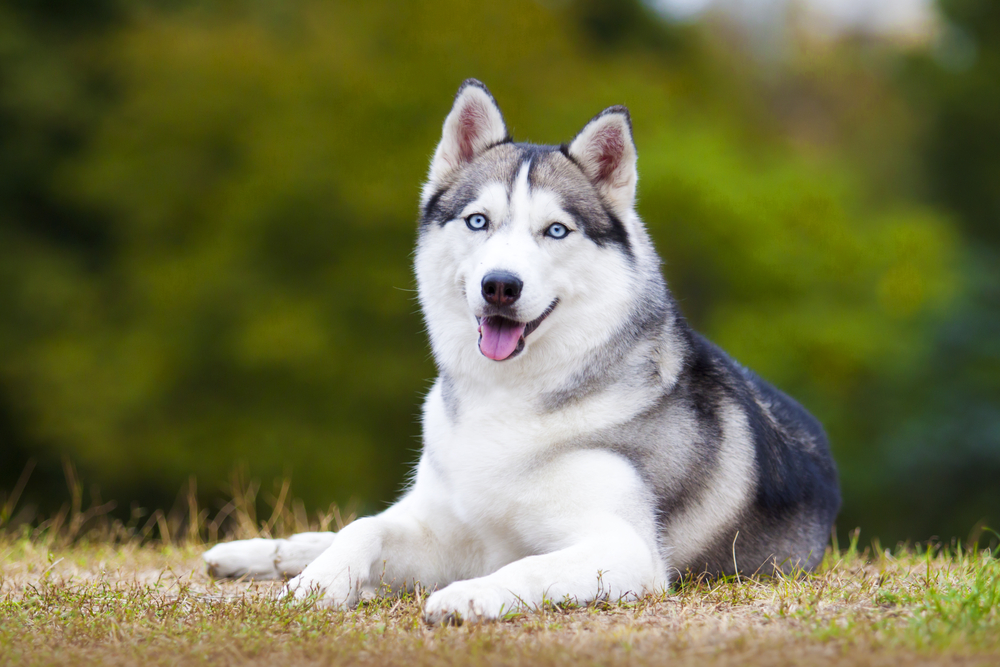 The Husky is built for cold weather with its double-layer coat and thick, wooly fur. Although this dog usually has a black nose, it frequently experiences Snow Nose, which can cause the nose to turn a lighter shade of brown or even pink in the cold weather.

Huskies have loads of energy and enjoy being active or having a job to do. These dogs can also be fairly stubborn and difficult to train for a novice dog owner.

Still, huskies can make loyal and loving pets, pending they have the right training and a consistent and calm owner. 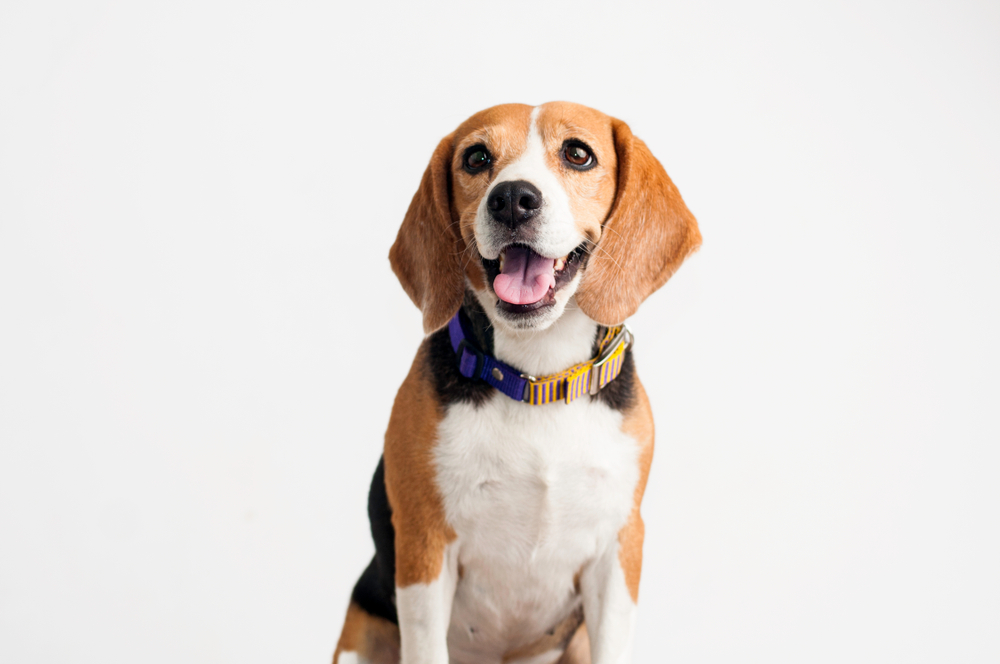 Usually, beagles with pink noses will also have reddish-brown fur and even amber eyes. 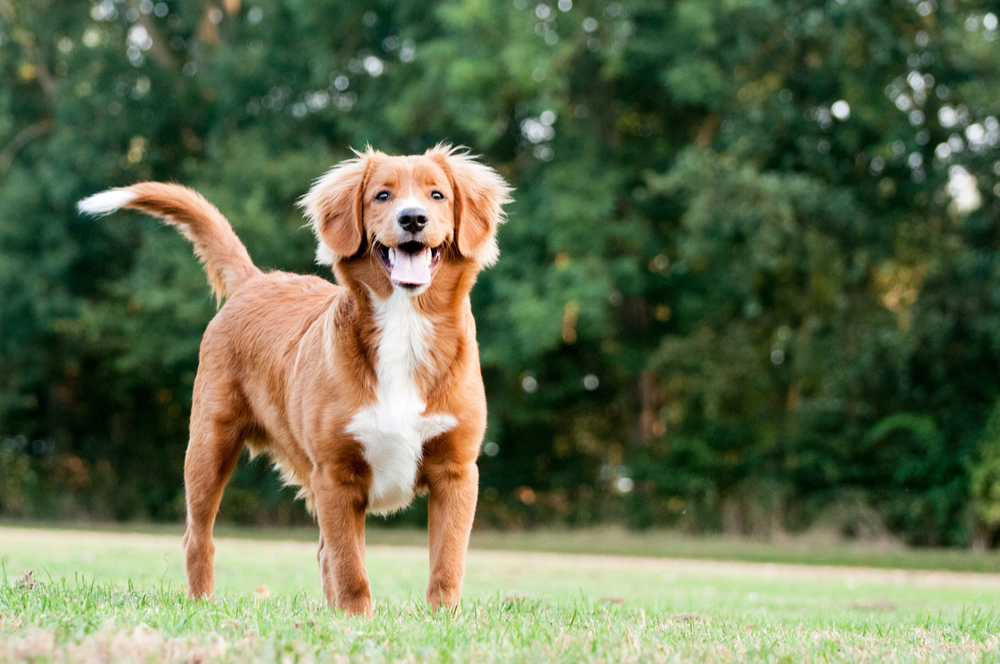 While not one of the most common dog breeds around, the Nova Scotia Duck Tolling Retriever makes an excellent companion.

This dog was bred to help retrieve waterfowl and will help indicate where the birds are by dancing, or tolling, at the water’s edge. These dogs are intelligent, energetic, and are eager hunters and helpers.

While most Nova Scotia Duck Tolling Retrievers are born with a black nose, some dogs in this breed can have a pink nose.

Dogs with pink noses are perfectly healthy and still are considered in compliance with breed standards. 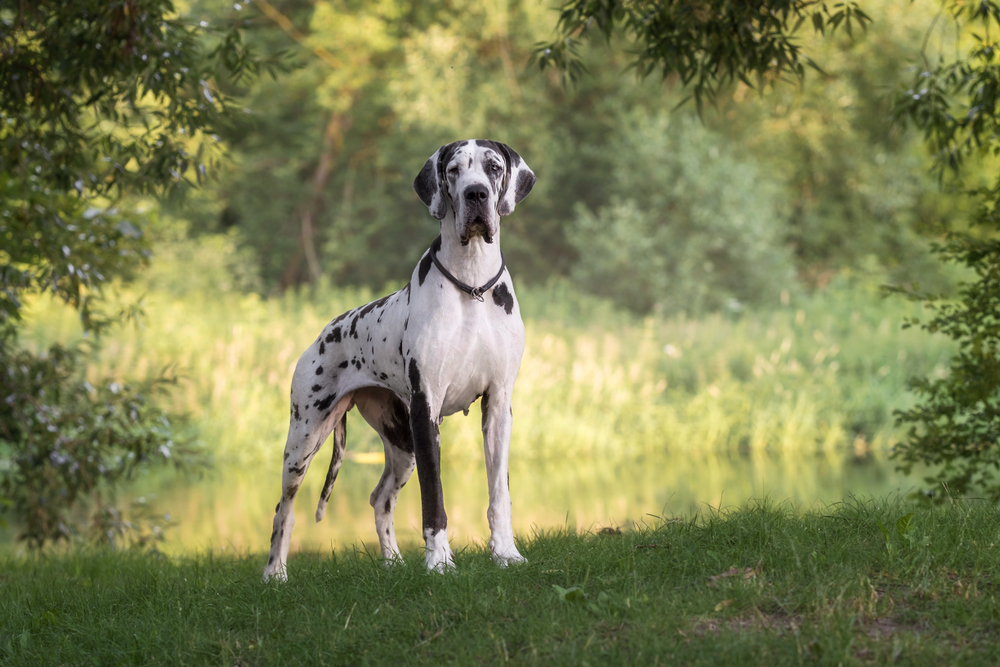 One of the largest dogs in the canine family, the Great Dane is a giant breed dog. These dogs constantly reach over 30 inches at the shoulder and easily weigh over 150 pounds.

Great Danes come in many colors, and the Harlequin Great Dane will frequently have a solid pink nose or a Butterfly Nose.

This dog is loving and loyal and, at its core, simply wants to please its human family. The dog quickly learns obedience commands, essential for a dog of this size and weight.

Although generally good-natured, a playful Great Dane could inadvertently injure a person or small child through rough play. 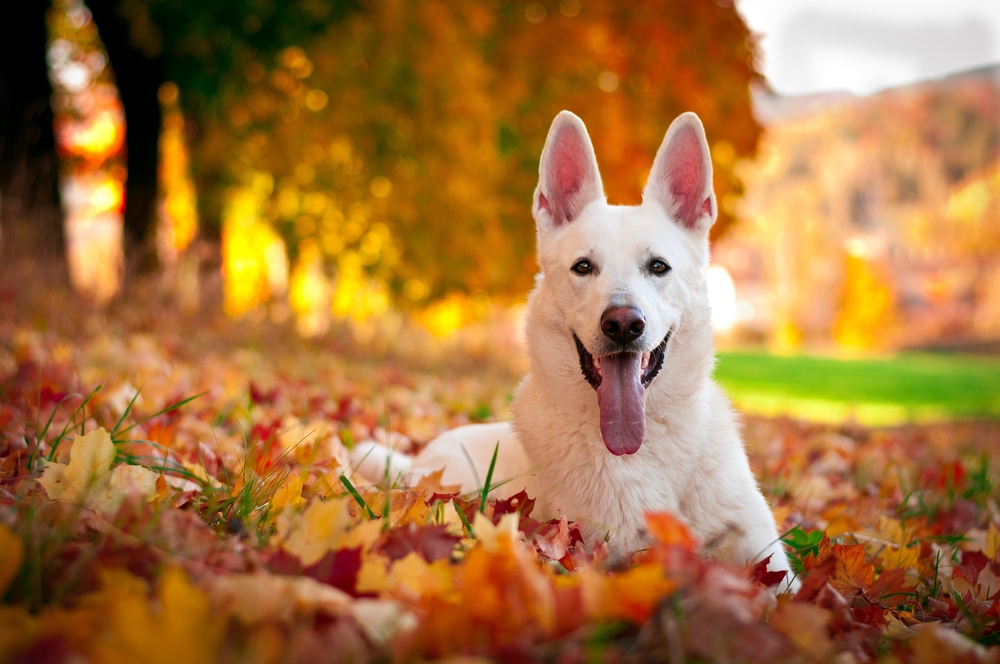 The White German Shepherd is a stunning dog breed but not formally recognized by many breeding organizations. This dog looks similar to a standard German Shepherd but has stark white or gray fur.

Most puppy and young White German Shepherds are born with a black nose, but the nose can turn pink as the dog ages. This unexplained phenomenon is called Dudley Nose and is common in several dog breeds.

Older White German Shepherds may have a liver or light brown nose. 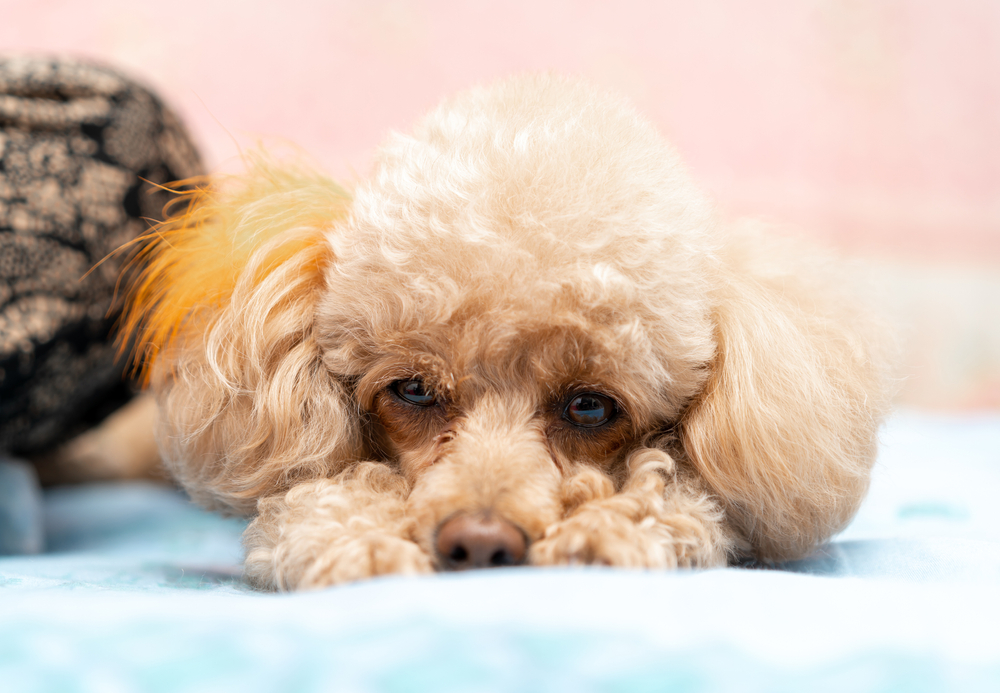 Poodles provide plenty of size options for dogs, coming in toy, miniature, and standard sizes. Depending on the size you adopt, a Poodle could be as small as 6 pounds or as large as 80 pounds.

This dog is largely touted for being intelligent, athletic, and loving. Plus, many allergy sufferers can live peacefully with this dog because of their mostly hypoallergenic fur.

The Poodle usually has a black nose, but the nose may turn to a lighter brown or pink shade as the dog ages. 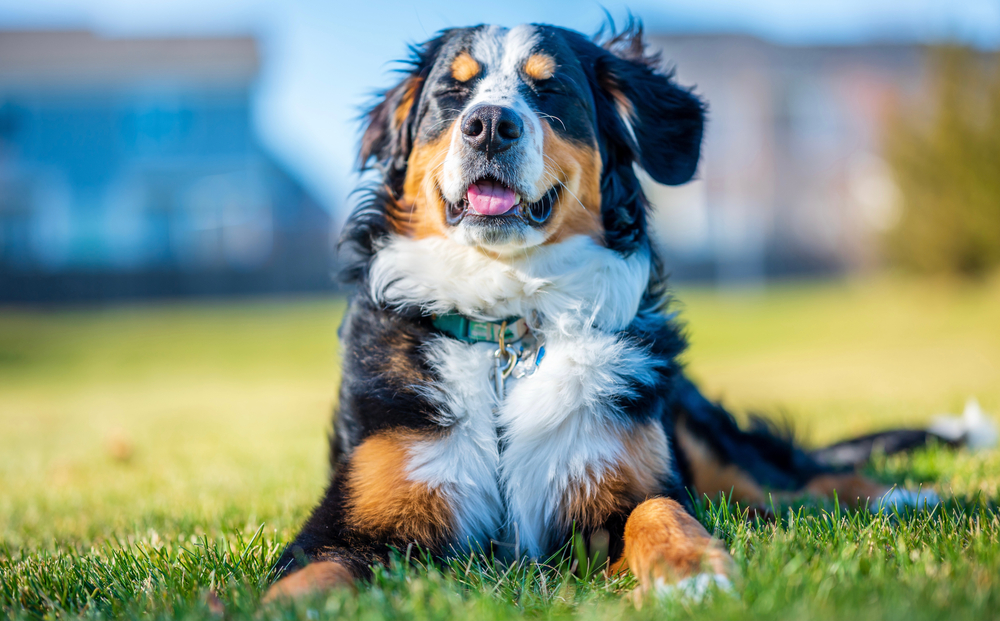 The Bernese Mountain Dog is quickly becoming one of the most popular dog breeds in the United States, mainly due to its friendly personality. This giant breed dog can easily surpass 100 pounds and grows to nearly 27 inches at the shoulder.

It has a long, flowy coat that is thick and warm, perfect for toughing out the cold winters in Switzerland.

The Bernese Mountain dog will usually have a black nose as an adult, but many puppies are born with a bright pink nose. Over time, as the dog ages, the nose will slowly turn black.

In some rare cases, an adult Bernese Mountain Dog may have small patches of pink on an otherwise solid black nose. 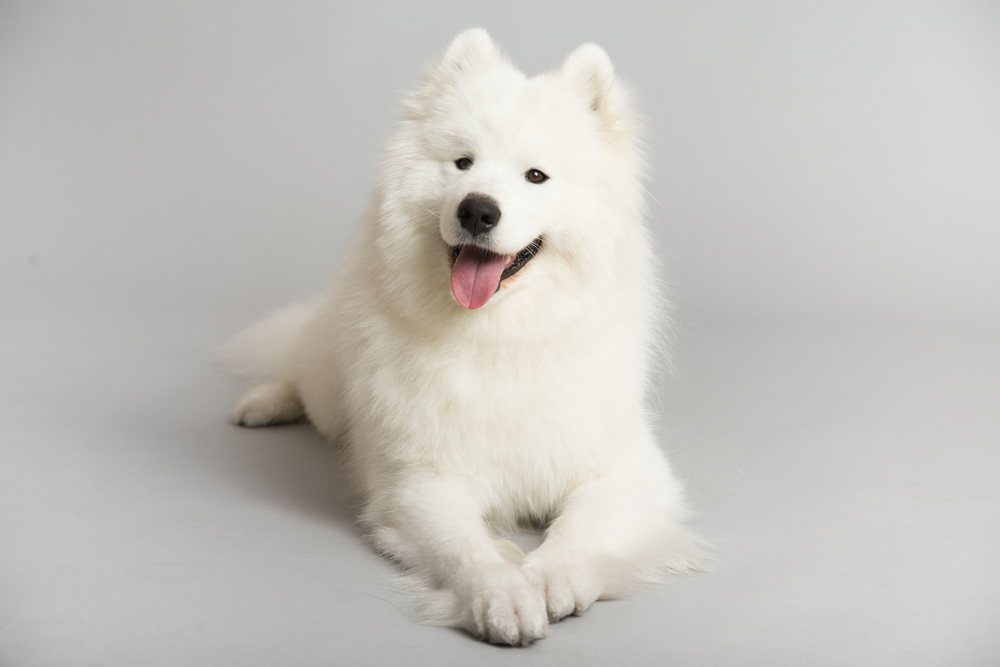 There is so much to love about the Samoyed. Between the oversized fluffy coat and the trademark “Sammy Smile,” it is hard to deny the cuteness of this giant breed dog.

Friendly and eager to please its owner, the Samoyed is an intelligent and athletic dog built for cold weather.

While most Samoyed dogs have a solid black nose, this dog breed will often have Dudley Nose, where the nose will slowly lighten to a pink color as the dog ages.

If your Samoyed’s nose changes colors, there is no need for concern. Dudley Nose is a normal occurrence and is entirely harmless. 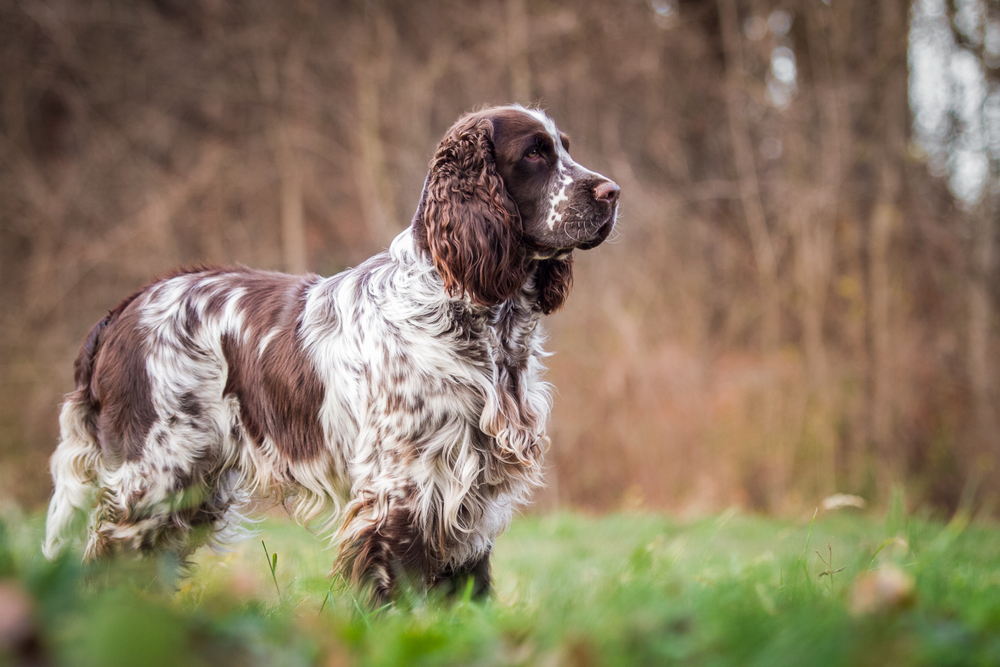 Although happy to spend the day outdoors, this dog also makes a perfect, loving family member and is well-suited for all families, including small children.

This dog can have liver spots on its coat, translating to a liver or pink-colored nose. This dog is highly trainable and loves to participate in tracking or agility competitions.

With so much variety within the canine family, it is easy to choose a dog based on specific physical characteristics or attributes. While some people may like dogs with short fur, others may...