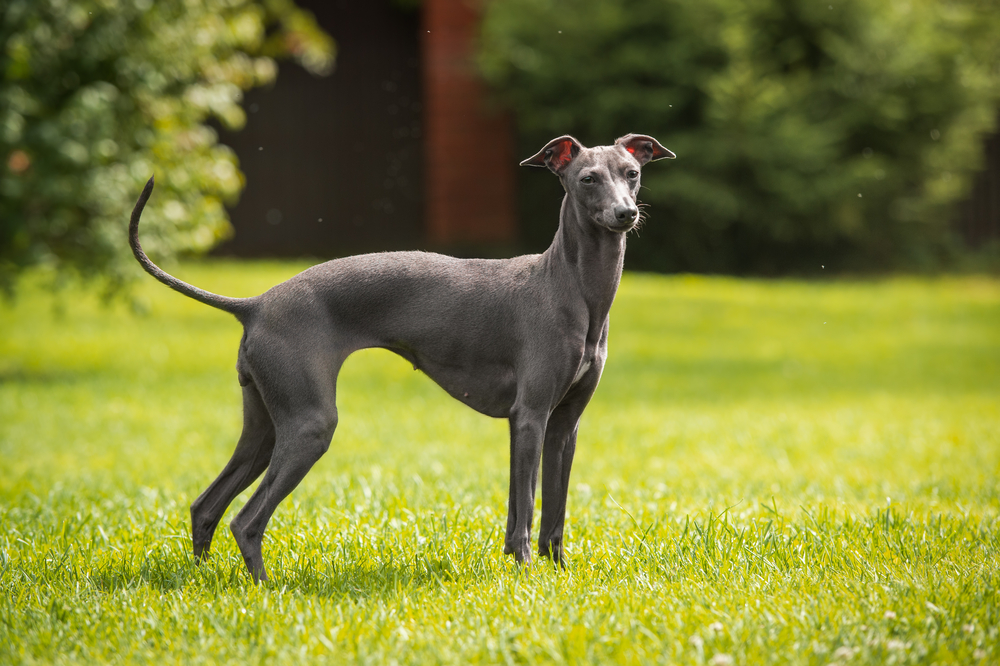 In comparison to their obese cousins, skinny dog breeds have a number of advantages. Because these dogs are thin, they can stay swift and agile, making them superb hunting hounds. Even when they aren’t hunting, they enjoy being occupied and make excellent companions for active humans.

Here are the skinny dog breeds we’ve included in this article, as well as a brief history and summary of each breed’s personality traits:

Skinny dog breeds have become popular among the dog lover community. There are several different breeds, which we’ve researched for you. Additionally, we’ve included some stats for each so you can decide if this is a breed that fits your family. 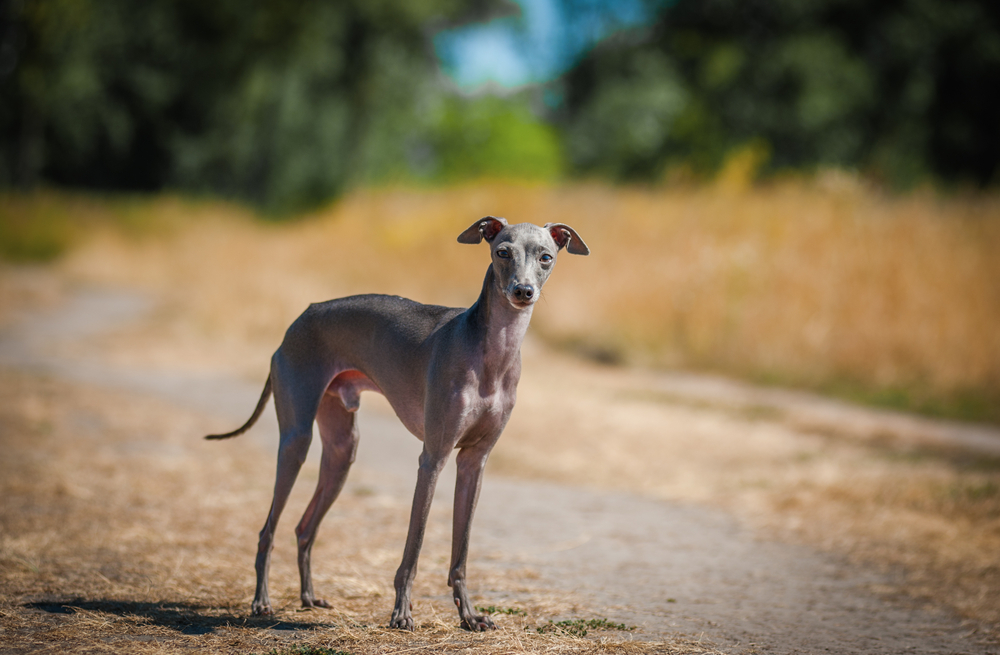 The Italian Greyhound gained its popularity during the Renaissance by the Italian aristocracy. However, evidence of this breed’s existence can be found in artwork from the Mediterranean region dating back over 2000 years.

During the 17th century, the Italian greyhound proved popular with English nobility, just as he had been in Italy. The Italian Greyhound was included in a small number of toy breeds available at the period, and his popularity grew until Queen Victoria’s reign.

Make no mistake; if you don’t let your Italian Greyhound run, then he will take out his energy on your furniture. Other times, he has no problem curling up in your lap. 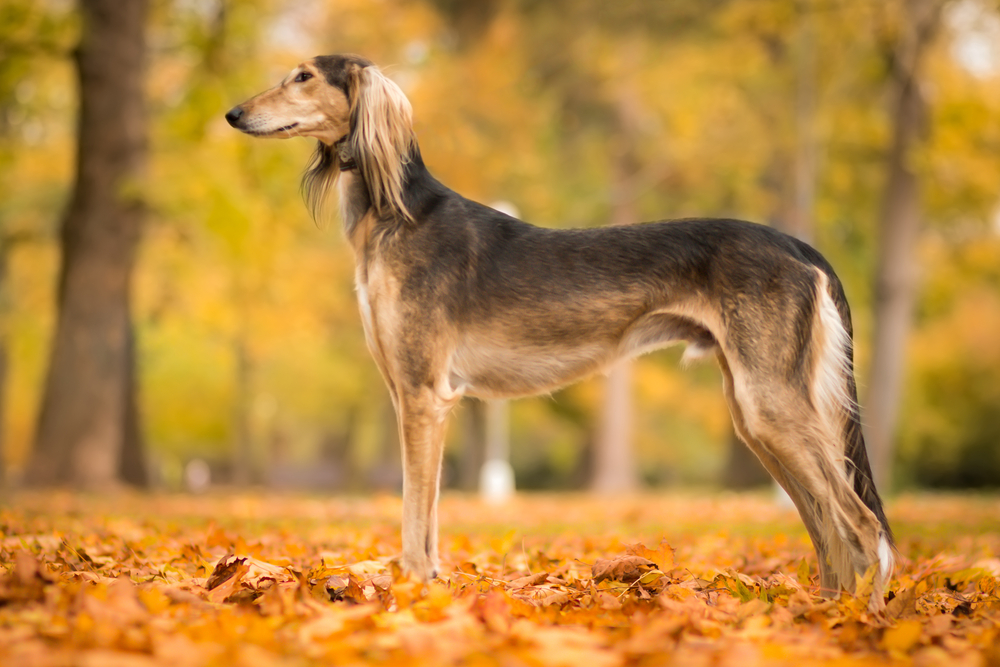 For thousands of years, the ancient Saluki, also known as the Gazelle Hound, has been hunting in the deserts of the Maghreb and the Middle East. This beautiful sighthound is still employed for hunting today, but it has also made a name for itself in agility and as a faithful pet.

The descendants of the Saluki are thought to have originated in Sumeria or Ancient Egypt. The art on Egyptian tombs from 2100 BC and Sumerian carvings from 7000 to 6000 BC prove this. The Pharaohs’ hunting dogs, the Saluki’s forefathers, were used to pursue gazelles and rabbits.

The dogs were held in such high regard that they were commonly mummified. Nomadic Muslims retained Salukis for hunting in later years. They called the dogs El Hor, which means “noble,” and allowed them to sleep in their tents.

One of the Saluki’s key attributes is lazing. They aren’t high-energy canines and won’t follow anyone around the house. Salukis regard creature comforts as a right; you’ll probably lose that fight if you can’t stand a dog on your furniture.

If you fantasize about a dog with Lassie-like devotion and loyalty, you’re daydreaming about a different breed. Positive training methods can be used to train Salukis, but they prefer to comply at their own pace — and whim.

But they don’t do much wrong, do they? (Aside from running away when called). They don’t pull you down the main sidewalk, howl constantly, or bounce up and down in a crazed manner. However, they are capable of digging, so watch your yard. 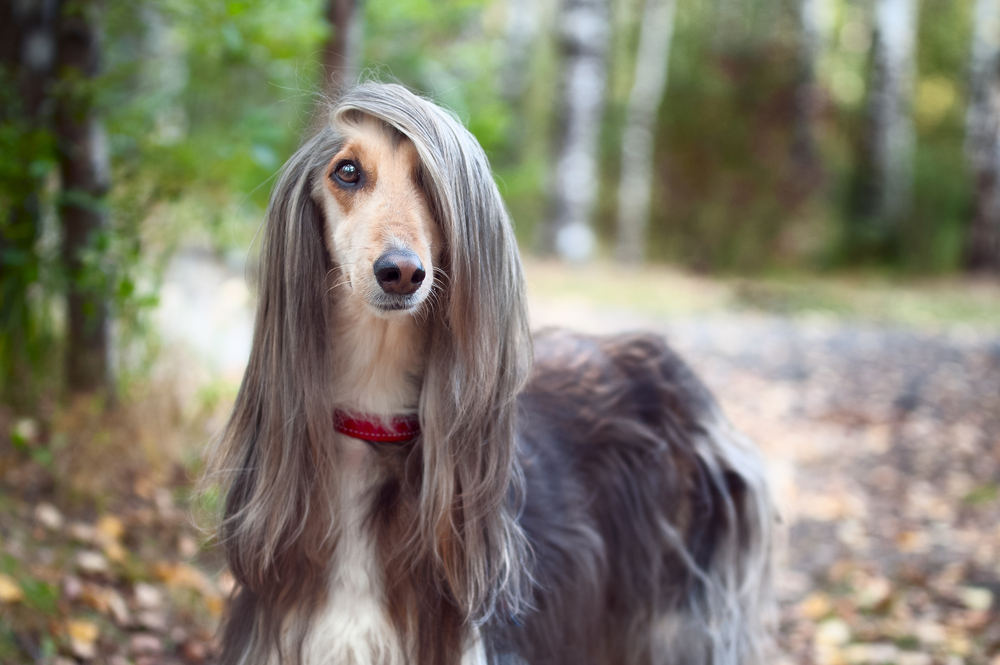 During the 19th century, the Afghan Hound was discovered in the western areas of Afghanistan. In the latter half of the century, these dogs were sent to England. Some suggest Afghan Hounds were used as guard dogs and herd dogs, both within the breed’s capabilities.

The primary function of these canines, though, was obviously hunting. For many years, the Afghan rulers would breed a kennel of these hounds solely for these purposes.

The first Ghazni imports to the United States occurred in 1931 when Zeppo Marx and his wife bought a female dog, Asra of Ghazni, and a hound, Westmill Omar, from England.

Because it was bred to be a hunting dog, the Afghan Hound is a very clever creature. They were bred to hunt and solve problems on their own, without the help of humans. As a result, the modern Afghan Hound is a tenacious and self-reliant beast.

Afghan Hounds are ideal for active families who want to spend more time outside and socialize with one another. They enjoy long strolls with their owners and can romp about a fenced yard for hours. Their enthusiastic attitude makes them excellent household pets.

The Kanni canine is a rare and old breed of dog native to the Tamil Nadu state. Kanni dogs are now located in the districts of Tirunelveli, Thoothukudi, and Virudhunagar.

They are standard-sized sighthounds bred to hunt small animals like feral pigs, Blackbuck, and hares. The Kanni dog’s native range includes the Western Ghats. Also, they were used to chase tiny wildlife that dwelt in the Western Ghats’ highlands.

Kanni dogs may be a bit of a curious type, always wanting to know what’s going on and offering some opinion. This, strangely, makes him a strong-willed dog who can make choices on his own when his master is not there.

On the other hand, when it comes to Kanni dog training, this can be a huge difficulty. Because of their strong will, they can be tough to train, and only an experienced hand can help them become better pets.

If you have a Kanni dog, you should never leave him alone. They are susceptible to restlessness, which can lead to destructive behaviors such as chewing on boots and ripping up your essential belongings. Kanni dogs can become uncontrollably vicious and aggressive as a result of isolation and insulation. 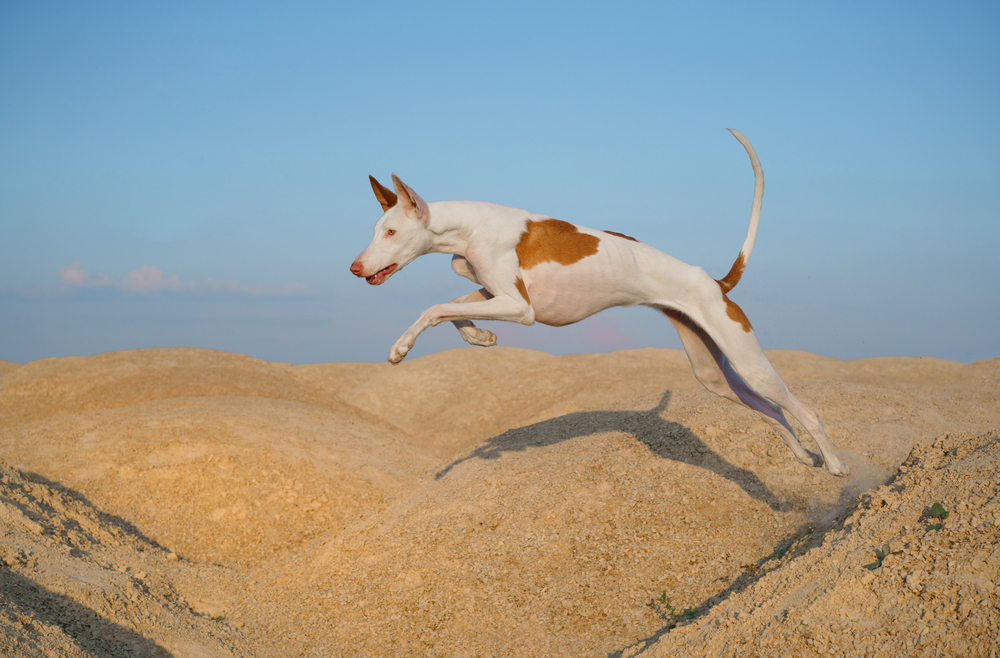 The Ibizan Hound is one of the oldest breeds surviving today, with a 5000-year lineage. In the tombs of Pharaohs dating back to 3100 B.C., remains of this dog or its progenitor breed have been discovered. In 800 B.C., they were transported to the Balearic Islands, where they were kept as a pure breed for nearly 2,000 years.

The Ibizan Hounds were specialized as rabbit hunters in Spain, especially in rough, rocky terrain. Because they accompanied the ancient commander across the Alps, they are frequently referred to as “Hannibal’s dogs.”

As a result, Hannibal and Tanit, the first pair of Ibizan Hounds brought to the United States for breeding, were named after the Phoenician goddess.

Small pets, such as rabbits, cats, and rodents, should be avoided because the Ibizan Hound was designed to chase them. Cats reared with the Ibizan Hound will fit right in as part of the “family pack,” but it will hunt and possibly kill an unknown cat.

Ibizan Hounds are calm, tidy, playful, and courteous and are sometimes referred to as “Beezers” by their owners. They’re protective and self-reliant, and they’ll keep a wary eye on newcomers. They will relax rather quickly after they have determined that the stranger is not a threat. 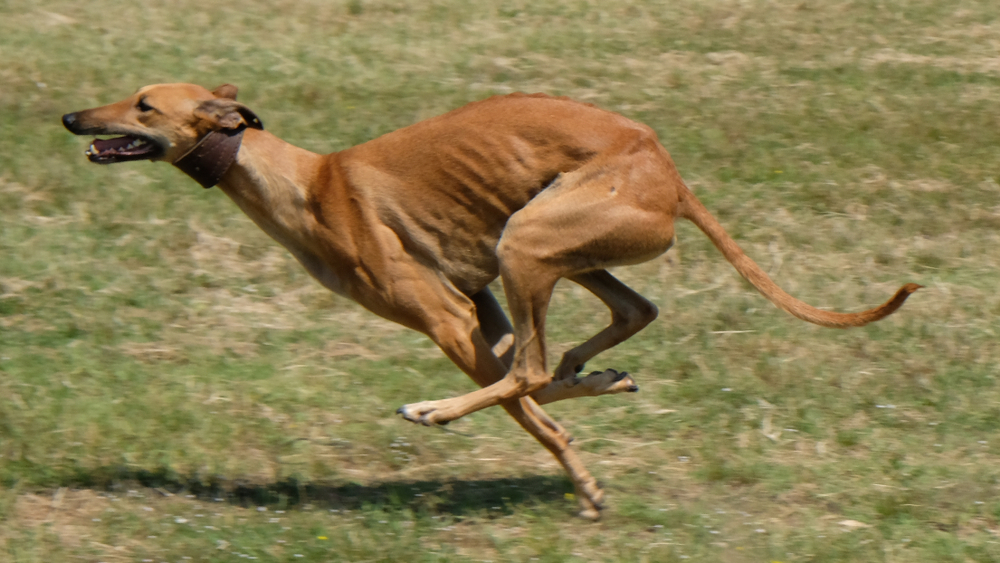 Greyhound-like dogs—domesticated hunters with long, slender bodies—appear in temple drawings dating back to 6,000 BC in the Turkish city of Catal-Huyuk. A 4,000 BC funeral vase discovered in modern-day Iran was adorned with representations of greyhound-like canines.

Because ancient artists preferred to depict only religious or socially significant subjects, these dogs must have been quite important to the people of the time. We don’t know for sure if these canines were the forerunners of today’s greyhounds.

Greyhounds are known for being peaceful dogs that remain quiet and graceful in enclosed spaces. They prefer to curl up and relax in a warm and inviting environment. While these characteristics are ideal for inside a home, the Greyhound does require a lot of exercises and a lot of space in order to perform the bursts of speed for which it is known.

However, Greyhounds do not take long to tire out; they are the sprinters of the dog world. A large, fenced-in yard, excursions to the dog park, or a daily walk or jog should be more than enough to keep a Greyhound in shape. 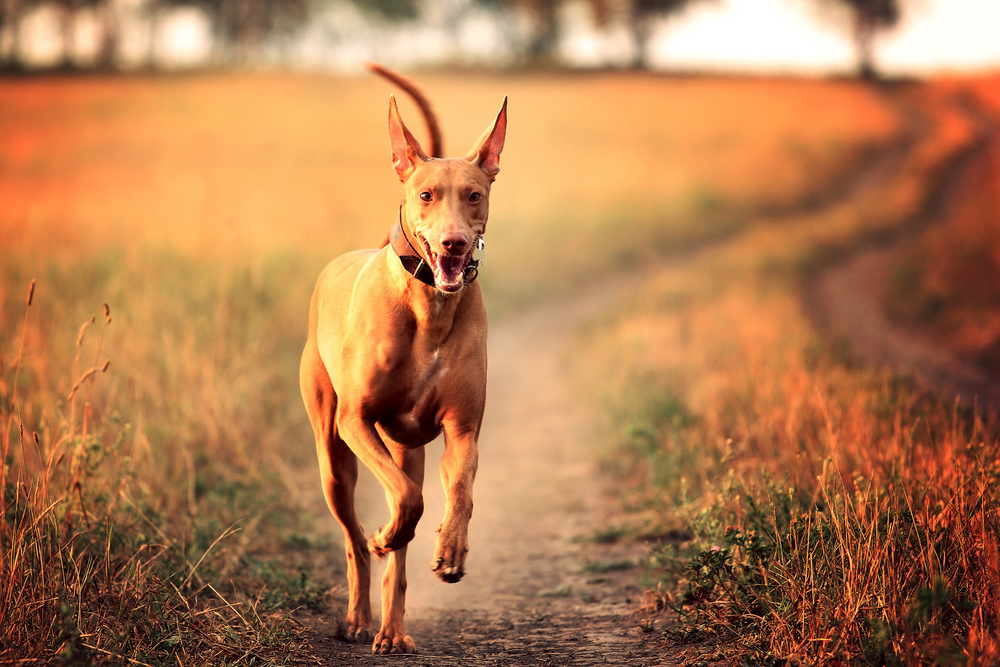 The Pharaoh Hound is one of the oldest recorded dog breeds, having originated thousands of years ago in Egypt. Beautiful works of art featuring Pharaoh Hounds provide witness to the breed’s ancient Egyptian history. These Egyptian temple sculptures and paintings date as far back as 4400 B.C.

For more than 2,000 years, the Pharaoh Hound has been recognized in Malta, where it has survived essentially unmodified from its forebears, who can be found decorating Egyptian tombs.

The Pharaoh Hound has a remarkable personality, and they are affectionate, gentle, and lovable to their owners. It is famous for its unusual or clownish character in the family. Like other hounds, these dogs have a healthy attitude and remain distant from strangers.

Moreover, a well-socialized dog will mix well with other canines and children. They have a sensitive nature and can identify their owner’s feelings and even suffer from frustration. They make excellent watchdogs as they often bark at a new sound or suspicious movement. 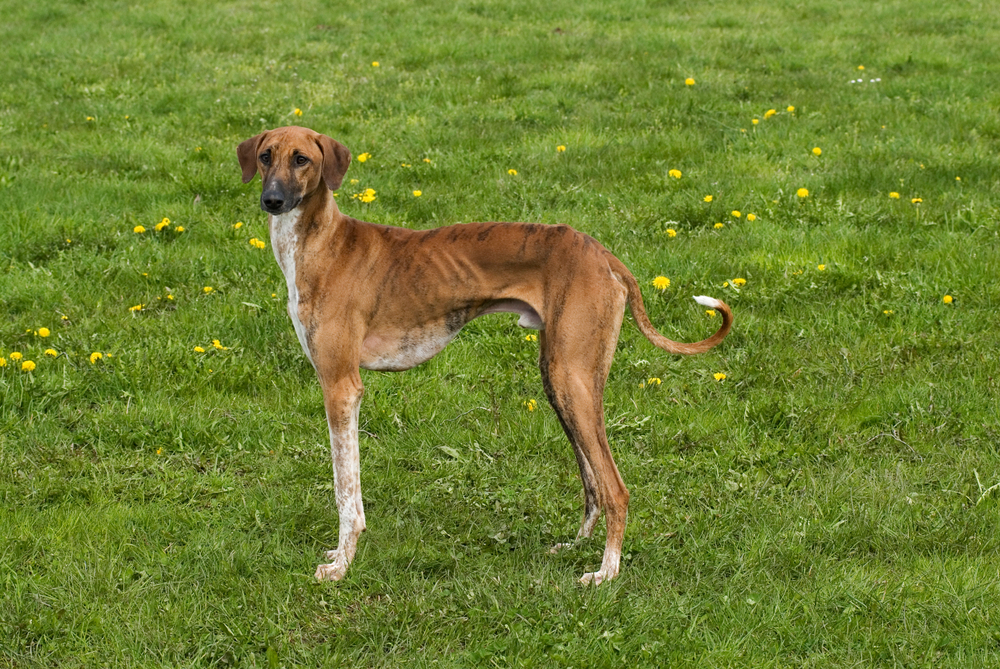 In Africa, the Azawakh lived in close proximity to nomadic tribes. “The Azawakh receive a special appreciation from the nomads,” according to the AKC. They share a home and are considered complete members of the family. They take on the responsibility of defending the campsite and flocks from intruders.

The breed is a dedicated hunter who provides meat for the family; but, with the decline in game and the increased use of weapons, the dogs are becoming less valuable.

The Azawakh hunted antelope, wild boar, and hare. Their endurance and agility came in handy when it came to collecting prey. The harsh, dusty terrain was no match for their long legs.

Because it has no desire in befriending strangers, the breed is generally labeled as distant. It can, however, be affectionate with its family, if not always fun.

It creates a close attachment with its owners at a young age and must be rehomed from the breeder no later than four months of age to avoid behavioral issues and suffering. It is fiercely protective of its home and family, barking suggestively and continuously when disturbed, yet seldom dangerous.

What is a sight dog?

A sight dog is also called a sighthound or gazehound. This is a type of dog that can hunt their prey using their speed and sight, unlike the scent hound, which uses endurance and scent to track.

What is the most skinny dog?

The most skinny dog is a Greyhound. They are very athletic and, on average, grow to be around 30 inches tall, and they only have approximately 13% body fat on their frames. But make no mistake, they are powerful and impressive competitors.

Why are sighthounds so skinny?

Sighthounds are so skinny because that’s how they evolved. They have very aerodynamic bodies, which make them fantastic for athletic competitions, and most of them have amazing health as they rarely ever are obese or overweight.