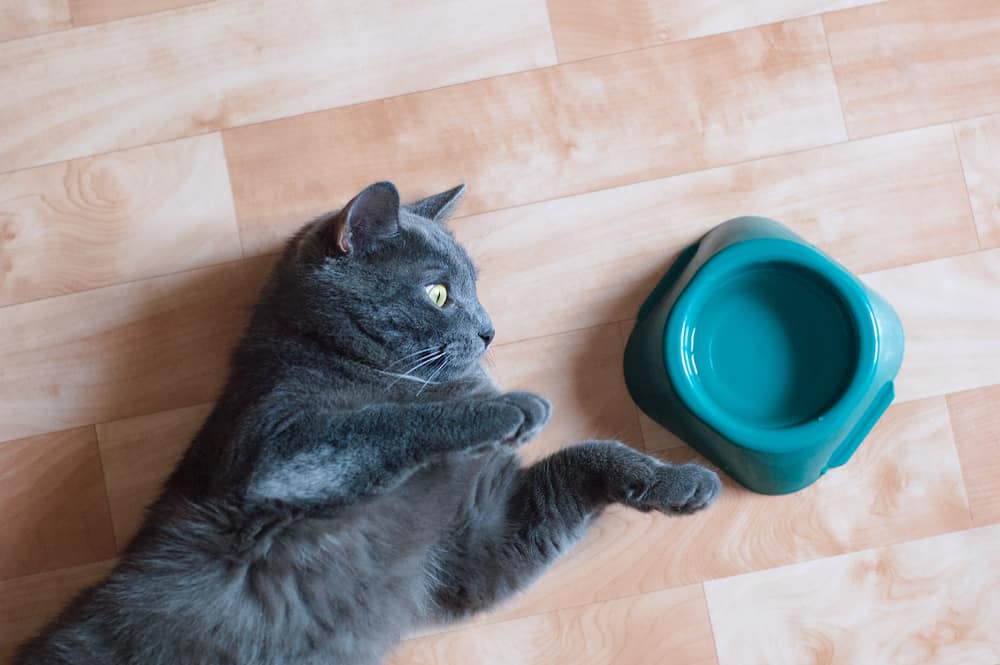 Cats are interesting pets that can provide years of entertainment and companionship. Often, our pet cats leave us questioning their actions as we observe unusual behaviors. It is quite common for owners to find their cats putting things inside the water bowl.

Many theories surround why cats put things in their water bowls, but most theories revolve around your cat’s instinct. Cats are likely viewing their toys as prey and simply bringing their game to a safe area. This behavior is more common when toys look like natural prey animals and common in multi-cat households.

Although there is no real danger to watching your cat put their toys in the water bowl, there are some instances to watch out for. You never want your cat to put a battery-operated toy in their water or an item that could potentially contaminate the water. To stop your cat from continuing this behavior, it may help to stop buying toys that mimic prey. You can also put ice cubes or floating plastic items in the water bowl to deter your cat’s actions.

What Kind of Things Do Cats Put In Their Water Bowls?

Cats are curious little animals that have some pretty exciting and entertaining behaviors. It is most common to see a cat dunk their favorite toy into the water bowl. This behavior holds especially true in multi-cat households or with toys that look like prey animals.

Although toys are the most common things to find in the water bowls, cat owners report seeing various items sinking in the water. On occasion, food, ping-pong balls, scraps of paper, and even fabric has been reported floating around in the water bowl. It is not uncommon to see a cat drag its favorite blanket or bedding to the water bowl and dunk a fabric corner.

Why Is My Cat Dunking Its Toys in the Water?

There are many theories for what could be drinking your cat’s urge to dunk its favorite toys in the water bowl. To be honest, animal behaviorists do not have a definitive reason for the behavior but do have a few ideas.

Your cat may be dunking its toys in the water because they are attempting to hide their prey. When your cat hunts and kills its favorite toy, it mimics natural hunting instinct. To protect its fresh “kill,” your cat will bring its prey back to a safe place, which is often the water bowl. Hiding its toy in the water bowl keeps the prey safe and hidden from other potential animals in its territory.

Another possible theory to your cat’s curious behavior is that your cat is simply gathering its favorite toys and stashing them in a safe place. This behavior is similar to a mother cat that will collect her kittens and bring them back to the safety of the nest. Your cat loves its toys and considers its water bowl a safe area for its collection.

Part of a cat’s natural instinct includes hiding the evidence of a fresh kill. The last thing a cat in the wild wants is another animal approaching and stealing its prey. One theory surrounding this odd behavior in cats centers on the idea that the cat is trying to wash off the “fresh kill” smell by dowsing it in the water.

Some animal behaviorists believe that a cat will repeatedly bring its toys to the water bowl because it has received a favorable response from the owner in the past. Whether you laughed or applauded your cat’s fresh kill, your cat was thrilled with your reaction and wants to please you continually.

Cats do some bizarre actions and are curious by nature. These animals love to explore and play, and there is an equal chance that your cat may be dipping its favorite toys in the water bowl just for fun. Swatting and batting at a toy floating in the water bowl may provide different stimulation and a fun new game to play.

Another theory suggests that a cat may be putting its toy in the water bowl as a way to help teach you, its owner, how to hunt. By bringing prey back to a central location where you frequent, your cat could be trying to give you some pointers on your own hunting tactics.

Is This Behavior More Common In Multi-Cat Households?

Interestingly enough, owners with multiple cats report seeing this behavior more often. This behavior may suggest that dunking the prey in water may, in fact, be an attempt to claim a kill and stake claim on territory in the house. Cats often consider their food and water bowl a safe haven, so protecting well-earned prey from potential household rivals is a common behavior.

Are Certain Breeds More Prone To Putting Things in the Water Bowl?

While this behavior is not necessarily common, it is certainly reported by cat owners worldwide. It doesn’t seem like one breed or another is more prone to this action, but it varies from cat to cat. Some cats may have strong hunting instincts and never dunk a toy in the water bowl, while other cats may be major couch potatoes who drown their toys daily. It really comes down to the individual cat and its personality.

Should I Stop My Cat From Putting Toys In The Water Bowl?

How Can I Stop My Cat From Putting Toys in the Water Bowl?

Although it may be cute to watch your cat carry its toys to the water bowl, this is not always an attractive behavior. Cats will sometimes put toys in water that cannot be submerged, forcing the owner to fish them out of the bowl continually. This fact is especially true with battery-operated toys.

What Should I Do If My Cat Puts Things In The Water Bowl?

Because there is no immediate danger to watching your cat put toys into the water bowl, there is really no action required on your part. Simply observe this fun behavior and make sure your cat is only dunking appropriate items. If you notice your cat repeating this routine throughout the day, it is a good idea to continually refresh your cat’s water to ensure contamination hasn’t occurred. Aside from the mild inconvenience of potentially having to clean up water, there is really nothing you need to do differently when raising and living with your pet cat.

What should I look for when choosing my cat’s water bowl?

Not just any bowl will do when selecting a water bowl for your cat. You’ll want to find a bowl that is shallow and wide to prevent the cat from hitting its whiskers on the side of the bowl. Look for a stainless steel bowl to prevent bacteria from collecting, and if possible, find a bowl with a rubber base. You’ll want to elevate the water bowl dish, so your cat can drink in a natural and comfortable position.

What are the best toys for cats?

The old adage holds that dictates the more you spend on a cat toy, the less likely they are to play with it. Luckily, plenty of cheap, everyday household items make the best cat toys. Try giving the plastic shower curtain ring to your cat so it can bat it around. Or buy a cheap ball, like a ping-pong ball, to let your cat roll it around. Cats enjoy bells and toys that make noise. Even the plastic milk ring that comes off a gallon container can be an excellent impromptu toy for your cat. Always make sure toys are big enough to prevent your cat from swallowing them.