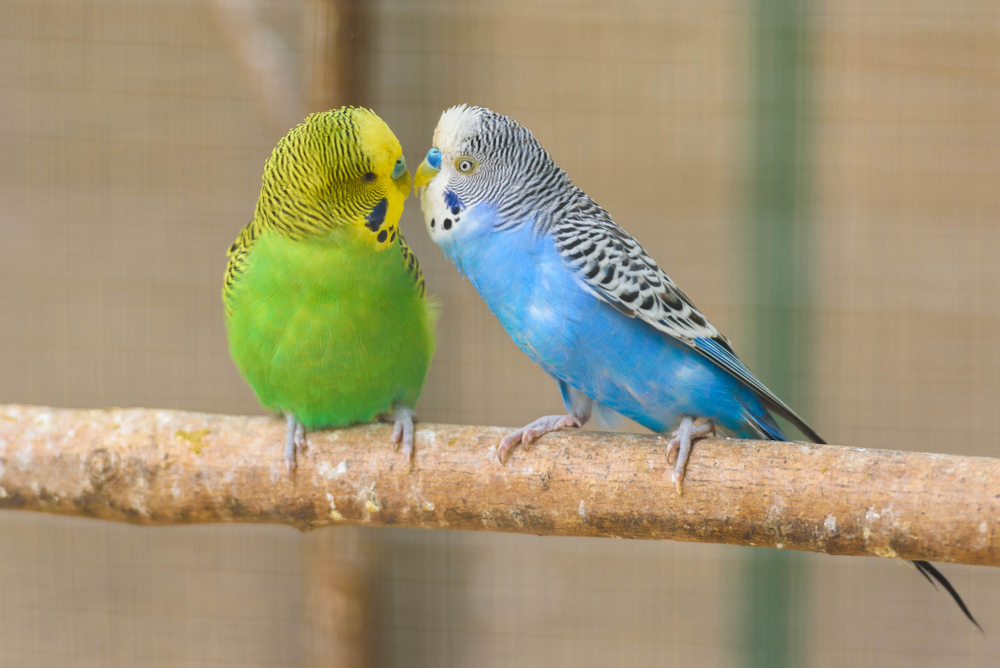 Parakeets kiss one another to show affection, build relationships with one another, and help each other preen their feathers. Kissing is a natural part of a parakeet’s social structure. This observed behavior is more common between two male parakeets than two female parakeets.

It is important to recognize the positive signs and signals associated with kissing birds, not to confuse kissing with fighting. Birds that are aggressive toward one another will often peck at each other, which could be misinterpreted as a kiss. Aggressive parakeets that are fighting will usually open their wings, hiss, or squawk at one another and potentially chase each other around the cage. It is important to always separate fighting birds so that a bird does not become injured.

How Can I Tell If My Parakeets Are Kissing?

Although parakeets generally form tight bonds, it is possible for birds to become irritated with one another. Stress, illness, and anxiety can cause a normally kind and gentle parakeet to become aggressive and grumpy. Always keep a close eye on parakeets that share a cage to ensure they are demonstrating positive behaviors with one another.

Do Parakeets Kiss to Show Affection?

The parakeet is an extremely affectionate bird and is social by nature. Parakeets are happiest when they are kept in pairs or small groups. To help enforce their tight bonds, they will practice group preening and signs of affection. Kissing is a common way for this bird to show it cares for another bird. Unlike kissing between humans, there is no sexual connotation to kissing parakeets. It is simply a behavior that lets another bird know they are loved and accepted.

The birds the parakeet chooses to kiss are considered part of its family or flock. The kiss signifies love and friendship toward another bird and can happen between any gender. Before they reach sexual majority, even young parakeets will partake in kissing behaviors with other members of the flock and family.

Is Kissing Part of Their Feeding Routine?

Food is an integral part of the social norms that parakeets practice with one another. A sign of affection between parakeets is to share a bowl and food. Sharing food is considered an act that helps all members of the flock. Sometimes, parakeets will show affection for another bird by first chewing the food and feeding it to a fellow parakeet. Parakeets will also kiss one another to indicate that they are hungry and want to be fed by another bird.

Parent birds will practice this same behavior to feed their young. Chewing food and regurgitating it for young baby birds is not only a way to ensure the babies stay well-fed, but it helps create a closer bond between the parents and offspring. The act of chewing food and feeding it to another bird often looks like the parakeets are kissing. If you look closely at the birds’ beaks while they are kissing, you may sometimes see small bits of food pass between the birds.

Can Kissing Become Part of a Grooming Routine?

Parakeets like to spend time together and build social bonds with their flock. A big part of their social activity is grooming one another. Preening is the act of digging through feathers to keep their feathers and skin clean and pest-free. For hard-to-reach areas, it is helpful to have a fellow parakeet help. To preen the neck, chin, and head, a parakeet will use its beak to look like it is kissing another parakeet.

Not only is preening essential for good parakeet hygiene, but it also helps boost the parakeet’s mood. Preening can help increase a parakeet’s endorphins, making the bird happier and healthy long term.

The act of preening is essential to keep your parakeet clean and healthy. Your bird will preen itself but will most likely recruit a close friend to help preen hard to reach areas with its beak. Preening is highly beneficial and can keep the feathers and skin clean by:

Does Gender Impact This Behavior?

Seeing two parakeets kiss is expected behavior that is commonly observed in the home. However, gender plays a large role when it comes to viewing kissing parakeets. It is more likely to see two males kissing than two females. Females tend to be the more aggressive bird with parakeets, so while two female birds kissing is possible, it is not as likely.

The only time two male parakeets won’t get along is if they are fighting for the attention of a female. When a female bird is introduced into a cage with two otherwise friendly male parakeets, expect fighting to begin, especially during the breeding season.

Could My Parakeets Be Fighting?

If you see two parakeets close together, chances are they are simply enjoying one another’s company. Although social and usually docile birds, it is possible for parakeets to fight. It is essential to recognize the signs of fighting and be able to intervene if necessary.

Some common signs of fighting parakeets include:

If you notice any of the above behaviors, it could be an indication your birds are fighting. It is important to separate the birds immediately to prevent injury.

How Do I Stop Parakeets From Fighting?

Although parakeets are usually very friendly, they can fight with one another. Fighting can at first look like two birds are kissing, but there will be aggression and usually more noise. There are some solid methods to stop two birds from fighting. To stop a parakeet fight, you can try:

How often do parakeets molt?

Part of keeping feathers in good condition involves a process called molting. Molting replaces old feathers with new healthy feathers. A parakeet can molt throughout the year and will usually molt two times a year. Usually, it takes a few weeks, potentially a few months, for a parakeet to complete its molt.

Why do parakeets clean one another?

Parakeets are extremely social birds and like to live in large colonies or flocks. There are certain areas of the body where a parakeet can’t reach, so it relies on its fellow birds to help keep up with grooming. It is common to see parakeets clean each other, especially around the head and chin. Preening takes up a large portion of a parakeet’s day.