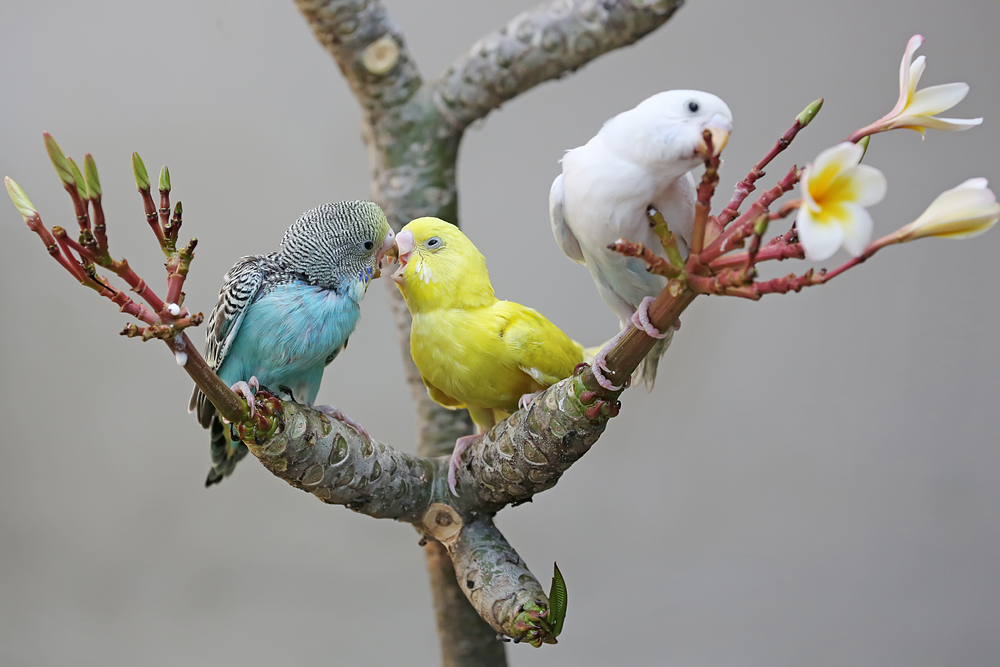 Parakeets are social birds and often live in flocks of up to 3,000 birds in the wild. Living together in a large social structure keeps a parakeet healthy and happy. But, like all living animals, sometimes housing two parakeets together can lead to fighting, causing severe injury.

Parakeets can fight for several reasons, but usually, fights are related to limited resources. Food, water, perches, toys, and the possibility of mating are the leading causes of fighting between birds. Two female parakeets are more likely to fight than two males unless mating displays are present.

Distracting fighting birds, either with a loud sound or with a soothing voice to deescalate the problem, is the best way to break up a fight between parakeets, keeping your pets safe.

What Are Signs Of An Aggressive Bird?

If you have a bird fighting with other cage inhabitants, you want to recognize the signs of aggression early. Being able to intercept a potential fight can help keep your birds safe. Some of the most prominent signs of an aggressive bird include:

To prevent territorial battles between your birds, consider how you set up the cage. You want to have a cage large enough so every bird has enough room to create its own space.

Make sure that every bird has equal access to resources like food, water, and preaches. Swings should all be hung at the same height and should be equal in size. Leave plenty of room between perches so that birds feel secure sitting alone in their own space.

Will Parakeets Fight Over Food?

Food is the most critical resource for a parakeet, and if you notice fighting between your birds, it could be related to a food battle. Parakeets will often have small bickers around the food dish, indicating one bird may be resource guarding.

To prevent food battles, try to include several food dishes throughout the cage. Make sure that each food bowl has the same type of food. In a rectangular cage with multiple parakeets, keep a food dish on three of the four sides of the cage.

When there is plenty of food to go around for all the birds, parakeets will fight less often and won’t try to protect the only food resource in the cage.

Do Parakeets Fight Over Toys?

Just like other resources within the cage, parakeets will view toys as a limited consumable. While parakeets are more likely to fight over food and water, it is possible to see two parakeets fight over toys. To avoid this, always make sure you have plenty of different toys throughout the cage.

If both birds compete for one toy, purchase a second identical toy and hang it in the cage so each bird can have its own. Offering plenty of choices to play with should help eliminate fighting between your birds.

Can Mating Displays Cause Fighting?

Occasionally, mating displays and courtship can lead to fighting between your birds. Parakeets are more likely to fight if two males and one female live together in a cage. The two male parakeets will fight with one another as they try to prove their strength to the female to win the right to breed.

When the female begins her breeding cycle, parakeet owners notice increased aggression between the males. In some severe cases, parakeet fighting can even lead to death. If you suspect that the female bird is causing fights between your males, the best option is to separate the birds from one another until the breeding cycle ends.

If you cannot house the birds in different cages, sometimes simply rearranging the cage’s interior is enough to stop battling parakeets.

How Can I Stop A Parakeet Fight?

It can be alarming to watch two of your beloved parakeets fight. To avoid serious injury, disrupt any fight between the two birds. The best ways to stop a parakeet fight include:

Can My Parakeets Be Playing And Not Fighting?

Parakeets are social animals, and as such, will interact with one another. It is essential to tell the difference between playing and fighting. Signs of acceptable and encouraged behavior between birds include:

Can two male parakeets get along in the same cage?

Parakeets are extremely social animals, and it is always best to keep these birds in pairs. Having two males live in the same cage is preferred to having two females live together. Female parakeets can be extremely territorial, and if the two birds don’t get along, it could lead to continuous fighting.

Alternatively, two males will almost always get along with one another. The only caveat to owning two male parakeets is if there is a female in the cage as well. Having two males with one female could lead to fighting, especially when the female bird enters the breeding season.

How can I introduce a new parakeet to my existing bird safely?

Keep the cages apart and gradually move the cages closer together. After a few days, arrange for a sleepover. Allow your established parakeet to visit the new bird, eventually spending the night. Over a week, you should be able to safely allow both birds to live together in the same cage.