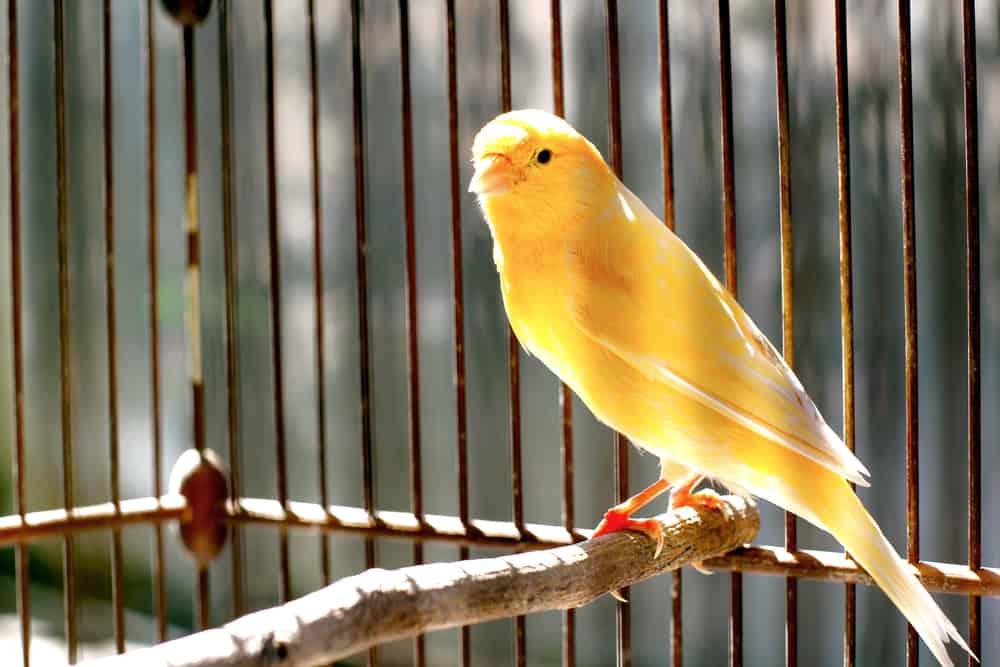 Canaries are small, docile birds that are long-lived and great pets. These birds are most commonly bright yellow, but oranges and reds also exist in the breed. Although the males produce a pleasing song, many potential owners question a canary for fear that these birds will be too loud for their home.

Canaries are quiet birds that hardly make noise, given they are quite timid. Males, however, will produce a song but the song often blends into background noise. Males do this to attract their female counterparts. Certain breeds, like the Harz Roller, have a pleasing song, sung at a soft volume. In comparison to other birds, canaries are quieter than parrots or parakeets.

If you are concerned with the volume of your canary, you may want to consider breeds that have a softer volume. The Waterslager and Harz Roller canaries produce beautiful songs that are soft and peaceful. Although the Persian and Spanish Timbrado canaries produce beautiful songs, these are known to be loud birds with strong voices. Male birds will sing throughout the day but cease singing when molting or in the winter seasons. A canary that has stopped singing completely may be sick or receiving poor nutrition, so a veterinary appointment is necessary.

Do All Canaries Sing?

All breeds of canaries, both wild and domestic, will sing. However, only male canaries will sing a true canary song in most species. Female canaries can learn a song, and some will sing short snippets, however, compared to the males, females usually have a broken or weak song. There are many breeds within the canary species, some with more prized songs than others. Most people accept that the Harz Rollers are the best singers, combining tone, melody, and volume within the hobby.

When Do Canaries Sing?

Male canaries will sing for most of their lives and usually develop a song around four months of age. The bird will sing throughout the spring, summer, and autumn, but many owners report their male canaries singing less or not at all during the winter. To encourage more song throughout the winter months, try to increase the amount of natural light the bird receives each day.

Canaries will also cease signing while they are molting. The molting process will take between six and eight weeks. It is important to boost your canary’s nutritional intake with high-quality food during this time. Once the molting has completed, your canary will return to its normal song.

Do Canaries Sing at Night?

Of course, there are ways to keep your bird quiet during the night. Many owners choose to cover their bird’s cage with a dark cloth. The dark cloth will help your bird fall asleep and not sing throughout the night.

Are Certain Canary Breeds Louder than Others?

A canary is a popular bird because it has a beautiful song and a bright yellow coloration. Within the canary species, though, there are several breeds. Some of these breeds are highly prized because of their beautiful, bold, and loud songs. Some of the most popular canary breeds include:

How Do I Choose A Melodious Canary?

Choosing a canary is a wonderful experience that any true bird-lover will enjoy. First and foremost, you must choose a healthy, robust bird with clean feathers and bright eyes. A healthy bird is not only good for longevity but is more likely to sing for a long period.

Secondly, understand that most male canaries will only start singing when they reach four months of age and will only develop their complete and true song when they reach about six months of age. Many breeders will help you choose which canary is right for you. There is a process of secluding one male after the other, encouraging it to sing. Some breeders may use a simple cardboard divider, while others have birds in different rooms. Without competition from fellow males to see, the bird will sing a true and beautiful song. Sometimes choosing the right bird with a pleasing song may take some time and patience, but it is worth the effort.

Why Is My Canary Not Singing?

Many people choose a canary as a pet because of its beautiful songs. Unfortunately, certain situations can make your canary stop singing, which could be cause for concern. There are several reasons why your canary is not singing, which include:

Although canaries have a reputation for their beautiful and sometimes loud, melodic songs, the truth is this bird is very quiet. The canary is shy and timid and is ranked among some of the quietest birds available for pets. Aside from the normal song male canaries will produce, you may only notice the smallest chirp or twitter periodically.

How long do canaries live as pets?

If you are considering adopting a canary as your pet, consider the relatively long lifespan of this tiny bird. Most canaries will live to be ten years or older. Be prepared for a long-lived bird that will require a lifetime of care, food, veterinary visits, and affection. It is not uncommon for older male canaries to stop singing after they have reached the age of six or seven.