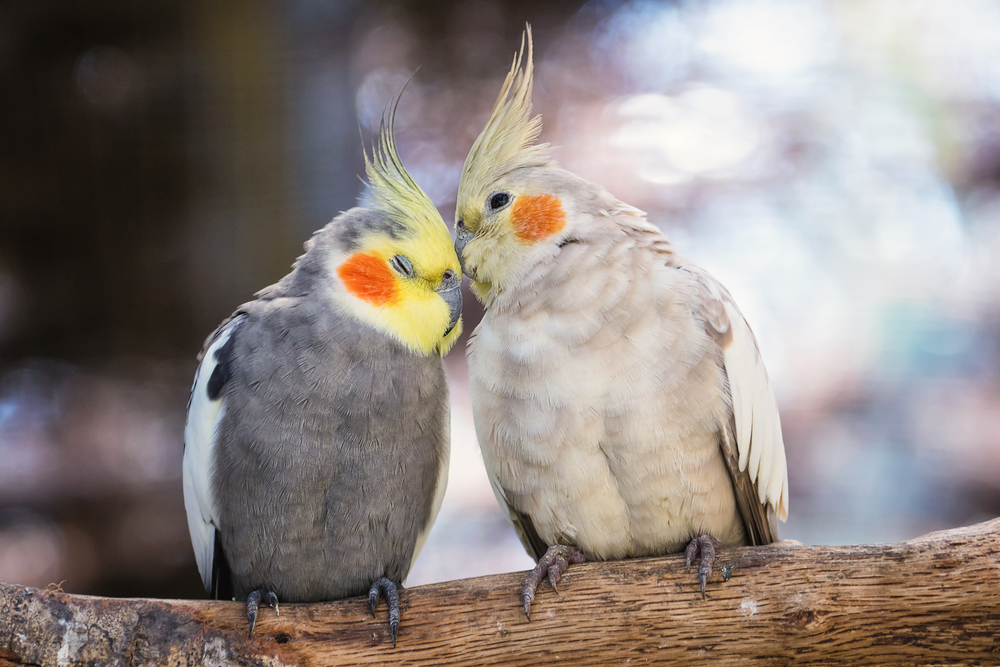 Cockatiels are the cousin to the parrot and have the ability to ‘talk’ although not as great as an African Grey. It’s no wonder that so many people want to own a cockatiel as they’re relatively easy to maintain, and they’re fun to observe. However, even though they fluff up and can be sweet, it doesn’t always mean that they’re cuddly.

Whether a Cockatiel is cuddly or not highly depends on their personality and the trust that they put into you. They are a friendly type of bird that loves human interaction. So, you’ll need to get to know your bird to find out whether or not it’s cuddly and wants to be treated as such.

They enjoy having their heads and crests rubbed, as well as being spoken to and interacted with; however, before you can get those cuddles, you must first gain your cockatiel’s trust, which takes a lot of time, energy, attention, and patience. We’ll speak on this in this article.

Cockatiels may not be as cuddly as your usual pet, but that doesn’t mean they aren’t affectionate. In reality, as we demonstrate in this essay, these birds are among the most sociable pet birds available. It is considerably more difficult to cuddle a cockatiel than it is to cuddle a dog, for example, due to their small size.

Cockatiels, on the other hand, are not so easy to lie on and embrace. As a kind of cuddling, a cockatiel will sit in the crook of your arm and snuggle against your body. Your cockatiel will also cuddle/show affection in the following ways:

There are several different ways that your Cockatiel will show affection. Some of those include:

What Can You Do To Make Your Cockatiel Cuddly?

It’s recommended to keep your Cockatiel alone for the first day or two after you bring him home to allow him to adjust to his new surroundings. You must understand that your cockatiel is stressed as a result of being taken away from his previous home and placed in yours. He’ll need some time to acclimate and reorient himself.

Spending little amounts of time outside of your cockatiel’s cage is a good way to start earning their trust. You can use this time to speak or read to your new pet in a nice and gentle tone to make your cockatiel see you as a friend rather than someone to be afraid of. This is a slow process that should be done in five to ten-minute increments regularly.

Build Their Trust In You

You can progressively go to placing your hand palm open on the floor of the bird’s cage and allowing him to willingly step onto your hand once that initial confidence has been established.

Watch your cockatiel’s reaction throughout the early phases of bonding, interpret his expressions, and don’t force your cockatiel to be held; otherwise, any trust you’ve built up to this point could be quickly gone. It takes time and patience to develop a bond with your cockatiel.

Your cockatiel will simply fly out of an open cage to sit on your shoulder or gently rub its face against your cheek as a show of affection once it has formed a link with you.

Cockatiels have a tendency to nip at their owners, which they do in a playful manner, but if you have small children, you need to keep an eye on them.

Gaining a cockatiel’s trust is a difficult process, but if you put in the time and effort to develop that particular bond with your cockatiel, you will have a rewarding relationship that will endure for many years.

Please consider a cockatiel as a pet only if you have the time to devote to them; they are gregarious creatures who require a great deal of attention and devotion.

Adopting a baby cockatiel is suggested for individuals who want to have a special link with their pet; done correctly, your cockatiel will become your best friend.

Cockatiels Should Be Separated When They Can From Their Parents

Cockatiels raised by their parents are less likely to be friendly and trusting of their human companions.

Parent-raised cockatiels are more wary and self-reliant than young cockatiels, which means they are less likely to give you the cuddling and attention you crave.

However, earning the confidence and devotion of a mature cockatiel is not impossible; it is simply easier to do so when they are young.

While having two cockatiels in one cage is allowed, it can make bonding with your cockatiels slightly more difficult because they will most likely have a stronger affinity with one another.

That said, bonding with both of your cockatiels is not difficult; it simply takes a little longer.

You Need To Bond Your Birds

When you have two cockatiels, the bonding process is identical to when you just have one, but it is recommended that you adopt them at various times or keep them in separate cages in different locations of your house or apartment and bond with them individually before placing them in one cage together.

Food is an excellent incentive and aid in cockatiel training. Millet is a popular treat that you may offer to your cockatiel; it promotes digestion and is a nice treat during stressful times like moving into a new home and training to be tamed.

Parent-raised cockatiels are more wary and self-reliant than young cockatiels, which means they are less likely to give you the cuddling and attention you crave.

However, earning the confidence and devotion of a mature cockatiel is not impossible; it is simply easier to do so when they are young.

While having two cockatiels in one cage is allowed, it can make bonding with your cockatiels slightly more difficult because they will most likely have a stronger affinity with one another.

What If Your Cockatiel Is Mean?

Cockatiels aren’t typically mean but if yours happens to be this is typically due to trauma or abuse. If you adopted an older Cockatiel then there could have been some abuse or maybe accidental mishandling which caused your bird to be wary of humans.

Also, if your Cockatiel was separated from its parents too late, this could also be the reason that it’s timid or a bit more on the aggressive side. You’ll need to work with it to get it to learn how to trust you again.

Cockatiels show affection by making different types of nosises such as singing, or chirping. They can also bang their different toys on their cage to get your attention. They aren’t super vocal, however, you can train them to be and if they pick up on several different songs, they’ll sing one for you.

Do cockatiels bond to one person?

Cockatiels are friendly birds that love to bond with their owner, however, this can take a small adjustment period. It doesn’t matter whether their babies or middle-aged and even senior birds. Cockatiels are pretty easy to bond.
Although, we will warn you if your bird has never been tamed this will be a bit of a process as you will first need to tame it and then bond with it. But, it’s still possible.

How long does it take for a bird to get used to a new owner?

It will take some time for your bird to adjust to its new environment and owner. This process will take about two weeks or so. However, it depends on how much you work with your bird and exactly when you begin working with him to tame him.