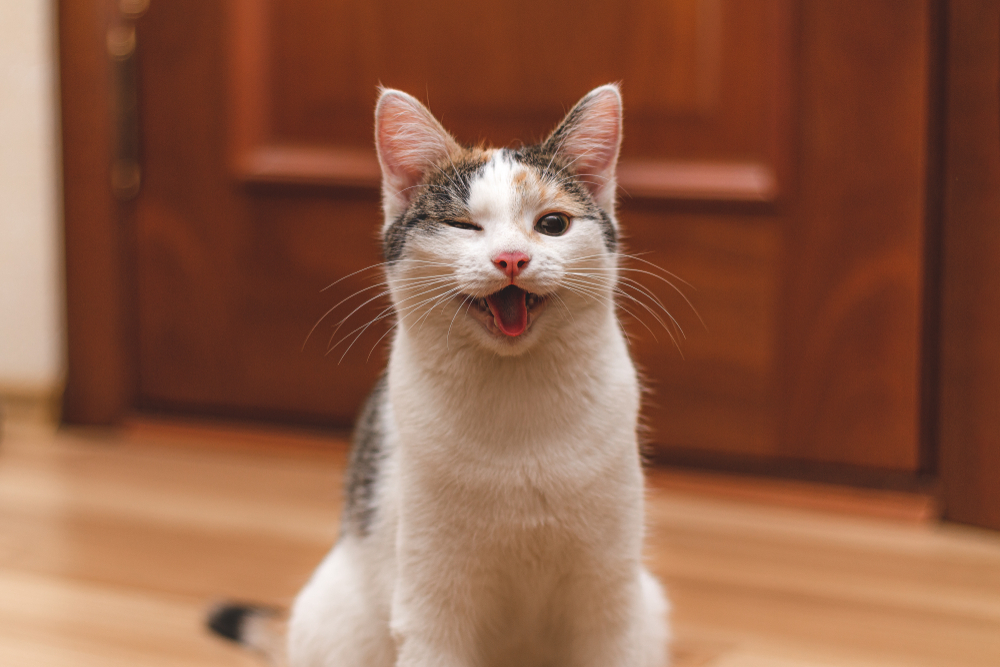 Has a well-timed wink ever set your heart aflutter? You might expect such a gesture from your spouse, but not from your pet. The mystery of why cats wink has eluded their owners for millennia – but we have the answers.

Cats possess an additional eyelid that keeps them from winking unless they wish to communicate. Winks can signal anything from sleepiness to sickness to affection, depending on your pet’s demeanor. No matter the meaning, every wink your cat makes conveys a sense of trust with its intended target.

Studying how our pets perceive and interact with the world allows us to translate the meanings behind their actions. Better yet, it helps us to respond with the same level of trust that our pets show us. If we understand why and how our cats wink, we can reciprocate their affection and tend to their needs.

Do Cats Have A Third Eyelid?

Humans have long debated the existence of a metaphorical third eye. Cats may lack an extra eyeball, but they make up for that with an additional eyelid instead.

Like their canine and avian cousins, felines possess a third eyelid that hides within their ordinary counterparts. The palpebral tertiary – more commonly known as the nictitating membrane – remains translucent to the naked eye.

Why Do Cats Need A Third Eyelid?

The nictitating membrane serves two purposes: protecting the cornea and remoisturizing the eyeball without inhibiting vision. Without it, cats remain dry-eyed and temporarily defenseless against predators.

In the wild, a single second without eyesight could endanger an animal’s life. Cats developed membranes that allowed them to see even when blinking in order to keep constant vigilance. Despite the lack of household threats, these membranes have yet to shrink after decades of domestication.

Not only does the membrane ensure continual vision, but it also keeps the cornea free of debris. Cats tend to hide amongst shrubs, bushes, and tall grass. Without their membrane, a stray blade or stem could pierce the eyeball entirely.

Membranes do more than protect the eye – they also refresh it. One pass over the eye revitalizes its former moisture. However, given the eyelid’s speed, we would never notice it without intending to.

How Do Cats Wink?

A cat winks whenever an eyelid passes entirely over one eye. Thanks to the functionality of the nictitating membrane, cats never need to use their visible eyelids.

Yet we know that they do, so why would they bother? The answer is simple: something must have disrupted or bypassed the nictitating membrane.

When something gets stuck in our eyes, we naturally wink repeatedly until the item dislodges itself. Our pets act no differently than we would in this scenario.

Despite this serving as the primary purpose of winking, humble pet owners and esteemed scientists alike have posed other theories. Could winking serve as more than a self-cleaning mechanism?

Do Cats Communicate Through Winking?

To understand how our domesticated cats communicate, we should observe their untamed ancestors. Wild cats utilize eye contact to convey both positive and negative messages to friends, neighbors, and predators.

One look at the lions of Africa and you’ll see this theory in action. Kings of the pride blink at others under their care to assure them that everything is under control. This relays a sense of peace throughout the pride and maintains the king’s dominance over it.

Friendly cats otherwise avoid any form of eye contact with humans or animals. Gazing directly at someone threatens or challenges whoever locks eyes with them.

With human body language, we would consider a lack of eye contact a sign of shyness or discomfort. Cats, however, believe the opposite. Refusing to engage you eye-to-eye means they do not wish to convey any ill will.

Winking with an exposed eyelid shows that the cat does not find the other threatening. This action requires them to let their guard down, which only happens when in a safe environment.

If your cat winks nice and slow at you, they feel at ease to pass by unimpeded. One tiny action shows just how much your pet trusts you.

Does Winking Mean A Cat Is Sleepy?

Cats may not need to close their eyelids to wink, but sleep is a separate subject altogether. Taking a catnap requires both of their eyes to be shut tight for the night.

As your cat begins to nod off, you may notice them winking at you. While this does convey trust, it can mean even more. Winking with half-lidded eyes indicates your cat’s plan to snooze while simultaneously saying they know you won’t awaken them.

Does Winking Mean A Cat Is Sick?

Despite winking’s traditionally positive purpose, its indications can veer into the negative every so often. Should you notice excessive amounts of winking, especially in one eye, look over your kitty’s eyes and ears. Upon closer inspection, you may discover unnoticed irritation stemming from any number of overlooked issues.

Is your cat only winking in one eye? Bad news: that could indicate a bacterial infection. If contaminated membranes turn a reddened color, then your cat’s contracted the most common infection – pink eye.

As its name suggests, pink eye discolors one eyelid or eyeball to have a bloodshot hue. Comparing the colors of one eye to another can help verify whether an infection took place or not.

An appointment with a veterinarian should immediately follow the appearance of an infection. Vets can provide generalized antibiotics that slowly dissipate the condition. Take care when applying them, as you’ll need to drop the medicine directly into your pet’s affected eye.

The healthier a cat is, the clearer their eyes. Any accumulated discharge will cause their eyes to cloud over.

Inflammation of the eyelid’s inner tissue creates this discharge. That liquid then leaks onto and glazes over the cornea. Even if the eyeball itself is not infected, the membranes surrounding it can affect their eyesight all the same.

When this discharge builds up, cats may wink in an attempt to forcefully clean their eyes. However, if the tissue is infected, this only worsens the circumstance by spreading the discharge.

Should your pet’s eyes appear murkier than normal, speak with a veterinarian about options to clear up their eyesight. Anything from upper respiratory infections to blocked tear ducts can cause discharge, so identify its source as soon as possible.

If your cat continues to scratch their eyes, you might share a common symptom with your pet. Like humans, cats can suffer from allergies when the seasons change or when in contact with fleas and expired food.

Vets can diagnose which allergies your cat suffers from and how to treat them. Each variation requires its own medication, so stay away from generalized cures.

Does Winking Mean My Cat Loves Me?

Many cultures believe that winks relay a cat’s affection towards their owners, earning the moniker “cat kisses.” We know that they communicate trust, but does that trust come from love or apathy?

As we cannot directly translate an animal’s actions, and each bears a different personality, we cannot say for certain. However, people have studied feline behaviors their whole lives – and they have theories of their own.

One such expert is none other than Dr. Gary Weitzman, President and CEO of the San Diego Humane Society. In his book series, How to Speak Cat, he claims that a cat winks to show signs of not only trust, but friendship.

If you notice your cat displaying this affection towards you, there is a means of safely testing your relationship. Slowly extend your fingers towards them and wait. If the cat truly desires to show affection, it will nuzzle or smell your fingers.

However, be careful when performing this assessment. If the wink did not indicate affection, the cat could take the extended hand as a sign of hostility and respond in kind. Be prepared to avoid a sudden lashing out of claws or fangs.

Should I Wink Back At My Cat?

Even though you are a human, the same basic rules of communication apply between you and your cat. Your cat will not misunderstand your signals simply because they come from human eyes instead of cat ones.

If your cat trusts you enough to send you a wink, be sure to send one back. This can help reinforce the feelings of mutual friendship between you two.

Why do cats purr?

Like with winking, purring is a language all its own. Hearing your cat purr means they are comfortable and pleased with whatever circumstance they find themselves in. Grooming or petting your cat is the easiest way to elicit this response.

However, more likely than not, purring is meant more for the cat themselves than for others around them. Scientists believe that purring provides a form of self-soothing, similar to how laughing or crying can cheer up humans.

Why do cats knead?

No one knows for sure why cats knead their paws into fabrics, soil, and anything else lying around. However, there are a number of potential theories out there.

The most popular hypothesis suggests that kneading marks a spot as the cat’s territory. The cat essentially embeds the scent from their paws into the material they’re in contact with. Thus, anyone who comes near it would recognize it as belonging to the cat.

This is similar in effect to other behaviors, such as rubbing against their owner’s legs or rolling around in dirt. No matter the location or method, cats always want their fellow felines to know what they own.