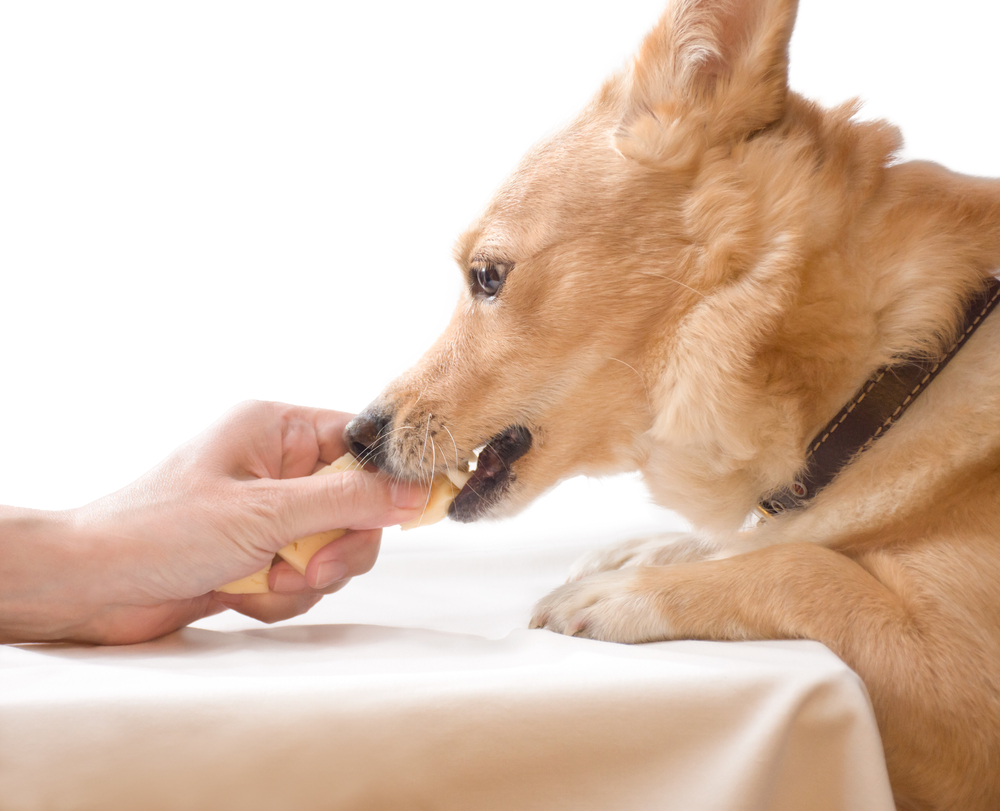 Dogs are considered part of the family by many pet parents. In my practice, I am always chatting with owners who truly want to do what is best for their furry friends, including improving their health in all-natural ways.

My staff and I are often asked many questions about whether or not it is safe to feed different all-natural health supplements to dogs. One common supplement that we are asked about is ginger.

You may be wondering, can my pup eat ginger? Will feeding ginger to my dog give him the same health benefits from the ginger that humans receive? And most importantly, is ginger safe for dogs?

Dogs can eat ginger. Ginger is not toxic to dogs and can have some health benefits for dogs, just as it does for humans. As with all supplements, dosing, form, and sourcing of the supplement are essential. Ginger is a palatable (meaning tasty and readily eaten) spice that is easily recognized by its distinctive smell.

Ginger is used in many Asian dishes and adds a robust flavor. However, this spicy little root offers much more than just taste. Ginger is also widely known for providing some impressive health benefits for humans and animals alike. The most notable is likely relief from nausea and gastrointestinal upset.

Benefits of Ginger & What It’s Used For

Ginger is actually a flowering tropical plant (Zingiber officinale) that grows naturally in areas of China. However, the plant is currently also grown in India as well as other tropical climates, including Hawaii.

The plant’s root is the portion used for cooking, as a spice, and as an herbal health supplement. The root’s use is a popular part of Western medicine.

The root itself is very thick, with knobs, twists, and turns, and is covered with a darker brown, tough exterior. Inside, the root’s flesh is a pale tan color and is a firm, grainy texture.

Many sources have indicated that ginger root has been used for medicinal purposes for thousands of years. There is evidence in ancient literature of ginger use in Ancient Sanskrit, Greek, Chinese, Roman, and Arabic writings.

The most detailed information about its use is found in Asian literature, where it has been used for centuries as both a culinary delicacy and a medicinal herb. The documented benefits include treating stomach pain, nausea, and diarrhea.

So, Can Dogs Really Eat Ginger?

Dogs can eat ginger in any form, and it is not toxic.

How much ginger you would feed your dog as a health supplement depends on the size of your dog. Dogs are unique in the fact that, as a species, there is great variation in their sizes, from tiny chihuahuas to huge mastiffs, so weight-based dosing is always crucial.

There are many suggested dosages of ginger in the veterinary literature, but it is always best to contact your veterinarian and ask for the proper dose for your dog. Other health conditions in your specific dog may change the amount they require.

Ginger for dogs can be obtained in different forms, including fresh, powdered, and capsules. All have some health benefits, and the dosage form chosen will likely depend on the dog and how readily they accept the supplement.

Can Dogs Have Fresh Ginger?

It is safe to feed fresh ginger to your dog; it is not toxic. Fresh ginger can be offered in sliced or grated forms. As a supplement for health, fresh ginger is my preferred form. The fresh herb is often more potent and more effective.

Another benefit to fresh ginger is that the herb is not processed or adulterated in any way. There is no worry about or the possibility of contamination with other substances. This makes fresh ginger the safest option for your pet.

Fresh ginger, which, as opposed to the dried forms, contains water, is often less likely to upset a dog’s gastrointestinal tract as it is not as concentrated.

Unfortunately, as mentioned previously, ginger root has both a powerful and distinctive smell and flavor. As is the case with humans, dogs either love it or hate it. Dogs who dislike the taste or smell may turn away from their food when it is added to their dinner.

In the case of a dog who does not prefer the taste or smell of fresh ginger, dried forms of the supplement, or even treats with the herb baked into them may be a better alternative.

Are All Forms Of Ginger Safe For Dogs?

Another consideration when choosing a ginger supplement for your dog is the ease of administration for the pet parent. Every dog and owner is different, and it is important to find a supplement that can be given consistently.

It is rare, but there have been a few reports of dogs choking on larger sections of ginger root. If you give ginger root to your dog, always take care to slice it and make it into small pieces that do not pose a choking hazard.

Benefits Of Ginger For Dogs

Ginger has been shown to have many health benefits for humans, and it is thought that these same benefits likely extend to our furry friends when they are fed the herb.

The most common uses for ginger in dogs are:

The most common of these is using ginger as an anti-nausea and anti-vomiting medication. This may help dogs who are ill or who experience these issues on car rides. Ginger may also help dogs who are undergoing chemotherapy for cancer.

One study showed some promise for the use of ginger as an aid in reducing microfilaria (baby heartworms) in the blood of dogs infected with heartworms. More research needs to be done, but this is promising as a new use for the herb. However, it is important to note that ginger will not prevent nor cure heartworm disease.

This classification of products is typically sold over the counter and without a prescription; however, they can have side effects and should always be given under the direct supervision of a veterinarian.

Your veterinarian can guide you in how to choose a safe and effective supplement. Because supplements are not regulated by the Food and Drug Administration as true drugs are, they can be sold with no proof of their effectiveness, safety, or guarantees that what the label states is in the product is actually contained in the supplement.

Due to this lack of regulatory oversight, it is vitally important to ensure that you are choosing a supplement that is not only safe, but is made of wholesome, unadulterated ingredients and contains accurate levels of the intended product.

A veterinarian with experience with these pet-specific products and supplements is always your best resource for finding the best product for your furry friend.

How Effective Is Ginger?

As is the case with most animal supplements, very few actual studies have been performed to evaluate the effectiveness of ginger in dogs.

However, there is anecdotal (based on personal experience) evidence that ginger does help ease nausea and vomiting in dogs.

In humans, there is scientific evidence showing that ginger is an effective gastroprotectant, but few other studies have been performed to date.

Potential Side Effects Of Ginger

Because there are so few studies available on the use of ginger in dogs, there is little to no actual information on the potential side effects of ginger supplementation in dogs.

In general, ginger and ginger root use is widely considered safe for dogs, and side effects are not expected.

As with anything new given to a dog, there is a potential for an allergic reaction. Also, some dogs may be sensitive to ginger, and it could result in gastrointestinal upset. This commonly manifests as stomach pain, reluctance to eat, and gas.

Which Dogs Should Not Be Given Ginger?

Again, there is little information about possible risks for certain dog populations due to the limited study of this herb and dogs. Any owner with a specific concern should always consult their veterinarian before beginning any new supplement.

In general, ginger should not be given to any dog that is allergic to the herb or in pets that have a documented bleeding or clotting disorder. There is some evidence that ginger should be avoided in dogs with gallbladder disease.

No new supplements should ever be administered to pregnant or lactating (nursing) dogs without the express direction of their veterinarian.

Ginger should be used with caution, or not given at all, with medications that have the potential to affect bleeding. Examples of medications that may be contraindicated with ginger include:

Any other herbal remedies or supplements you are giving your dog, along with the ginger, should always be cleared with your pet’s veterinarian first to avoid possible interactions.

Ginger and ginger root have been used for centuries worldwide in humans to treat multiple ailments. The herb is safe for the majority of dogs and may have many health benefits, most notably when used as an anti-nausea aid or for motion sickness.

As with any supplement, you should always consult your veterinarian about your specific pet and their health situation before adding ginger to their diet.