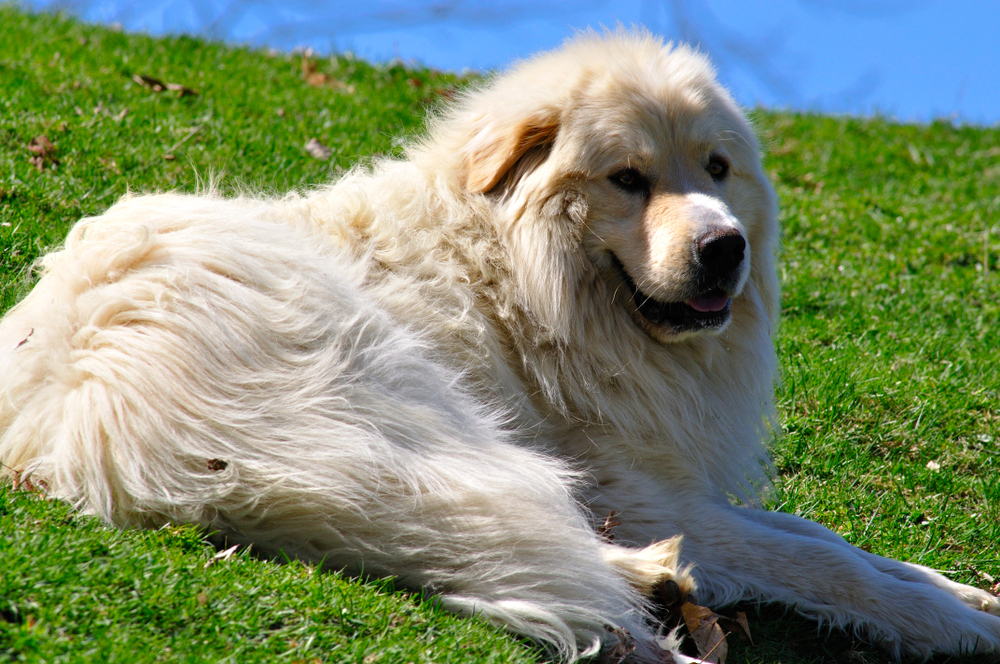 The Great Pyrenees is a majestic dog breed that’s extremely strong and weighs in at over 100 pounds. They stand nearly 3 feet and have fluffy, thick, beautiful coats. However, many people steer clear of these beautiful dogs because they believe they’re aggressive.

The Great Pyrenees breed is not an aggressive breed; in fact, they’re known for their patience and calm behavior. However, they do need quite a bit more training than other breeds as they are not an easy breed to train. They need to be adequately trained and socialized consistently to avoid aggression.

Before you hop on the anti-Pyrenees train, it’s essential that you learn a bit more about this breed to understand precisely why they are deemed an aggressive breed. They’re greatly misunderstood.

Great Pyrenees dogs are not aggressive; however, if they are not trained and socialized, they can be. They have a natural inclination to guard their flock and their home.

So, if they think someone is an intruder, even if they’re a friend of yours, they might become very aggressive toward that person. We like to call this breed ‘reserved,’ not aggressive. They don’t attack right off the bat, but they will watch someone’s every move if they’re not familiar with that person.

Is The Great Pyrenees Breed Dangerous?

This breed is giant and magical. They’re confident, beautiful, intelligent, vigilant, and are fantastic guard dogs. Historically, their breed was meant to guard sheep, and of course, they carry those instincts today.

Something that’s vital for this breed is that they receive the proper (and preferably immediate) socialization and training. This helps them be able to tell the difference between a friend and an enemy. When they are just a puppy, they should be introduced to a variety of different people on a regular basis.

While this breed can be very destructive as they will chew an entire mattress up or a whole couch instead of just a shoe or cushion, they are not dangerous. Their temperament all depends on their training and who exactly is raising them.

Are Great Pyrenees Easy To Train?

This particular breed can be tough to train, as they were bred to guard sheep on their own. That’s a stressful job, which made them hyper-aware. They had a split second to decide whether an animal or person was a threat and what actions they were going to take.

Mind you; all these decisions were made on their own without the assistance of their master. They are such good guard dogs that they’ve significantly reduced the death of any livestock that they were guarding.

So, while their guarding skills are impressive, these are exactly what makes this breed hard to train. They have to learn to go against their natural instincts.

How To Go About Training A Great Pyrenees

The primary focus should be on teaching your Pyrenees how to react to different varieties of visitors. If you don’t spend the time teaching them how to respond to different types of people or behaviors, then they most likely will mistakenly mistake someone as an intruder.

What Type Of Training Works For Great Pyrenees?

The typical obedience training will not work for these guys as they’re too bright and they will most likely grow bored rather quickly. Also, if you’re looking for a breed to do tricks for you, this is not one.

Great Pyrenees love to work. They love sports, stimulation, agility trials, and things along those lines. If you live on a farm, then this breed would be through-the-roof-happy as they have work to do.

Is Great Pyrenees A Friendly Breed?

Overall, this breed is friendly with their family and those that they’ve been trained to recognize as non-threatening. However, because they were bred to guard sheep, that instinct will carry over to their people.

This means that while they aren’t ‘mean’ or ‘aggressive, they’re very protective and will do anything they can to protect their family. They are even gentle and kind with kids, but only if they’ve been socialized with those children.

Guarding Temperament Of The Great Pyrenees

We’ve touched on this topic so many times already, but guarding is at the very soul of these beautiful creatures. If a new person comes to your home, the dog is going to assume they’re going to hurt their flock, also known as their family.

Even if the person is a mailman or a newspaper delivery man, the dog’s instinct will scream to them that the person is an intruder. This is why it’s essential that you begin socializing and training them when they are a puppy.

The training needs to be consistent and mostly aggressive to teach them that the new person is not someone to worry about and that they’re not going to hurt anyone. It’s a process, and if you’re not willing to be patient and train the dog properly, then this is not the breed for you.

There are many different things that cause aggressiveness in the Pyrenees, but they are generally a mixture of:

It’s important to find out whether the puppy’s parents were aggressive dogs. If they were, then the puppy most likely will be. However, that’s not to say it can’t be corrected with training and socialization, but it definitely throws a stick in the spokes.

Meeting the parents of the dog you want to adopt is a great idea. The dogs should not be aggressive. However, take care not to mistake standoffishness as aggression.

Ultimately, what matters is how the puppy is trained once it enters its forever home. As long as you’re dedicated to working with it and training it, things should turn out just fine.

Will Great Pyrenees Get Along With Other Dogs?

Whether this breed will get along with other dogs depends on several different things. Always keep in mind their guarding instinct, which could result in aggression toward other animals. However, if they’re introduced at a young age and take that puppy in as their own pack, they’ll be fine.

It’s commonplace for the Pyrenees to be somewhat intolerant of other dogs if they did not grow up with that dog in question. The intolerance may present as aggression.

How To Introduce Another Dog

Now, if you want to introduce another dog into a home where your Pyrenees already lives, you can do this carefully and slowly. They should only be able to interact through a glass door or some other sort of barrier until your Pyrenees gets used to them.

It’s not a question of whether this breed ‘likes’ other dogs but whether they are correctly socialized with them. Of course, they love other animals as long as they recognize that animal to be a part of the family they are protecting.

What Natural Instincts Do The Great Pyrenees Have?

The number one and most predominant instinct that the Great Pyrenees has is the instinct, of course, to guard its flock, as we’ve mentioned.

This is due to their lineage history dating back between 1000 and 1800 B.C. Even the white mountain dogs that they descended from were bred to guard the flock, which is why it’s so ingrained n their nature.

If the guarding behavior is one that you can’t appreciate or don’t want to work with, then you should forgo adopting a Great Pyrenees. No amount of training is going to take away their guarding instinct. Instead, the training is meant to teach them who and who is not okay to be around the house and family.

With the proper training and socialization, Great Pyrenees would make a phenomenal family pet. However, these two things are an absolute must. Without them, your dog may eventually become aggressive even toward its family members.

Make no mistake; this is not the dog’s fault. It would be the owner’s fault for not ensuring the puppy got the proper training. We highly recommend enrolling it in a specialized training class—not just obedience training as they’ll become bored with that quickly.

This breed, in particular, should live in a home that has plenty of yard space for them to run around as they have a lot of energy to burn. Ideally, they should live on a piece of land where they can help serve as a farmhand or something of that nature.