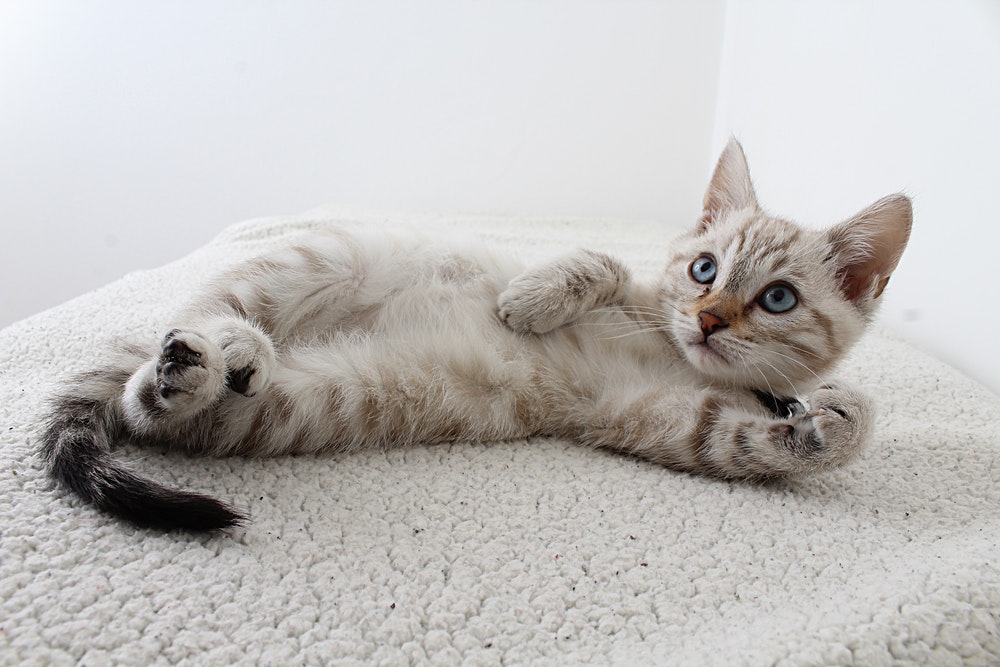 For the unfamiliar and uninitiated, cats can be as strange and foreign as, well, aliens from another planet.  The purring, meowing, and back-arching can be slightly unnerving for folks who’ve never been around these seemingly exotic creatures.  A cat flopping down unexpectedly in front of you may have you calling 911 for a pet ambulance.

However, a cat flopping down in front of you is mostly no cause for panic or even concern.  In fact, when such an occurrence happens, don’t be alarmed for it is pretty common cat behavior. The cat may have decided to trust you, wants to play with you, or is simply scratching its back.

Main Reasons Why A Cat Flops Down

Your Cat Is Seeking Attention

One of the reasons a cat flops down in front of you is because it is seeking your attention.  Not unlike a dog that barks, cats use their bodies to catch your eye.

Once you give them a moment of your time, they’ll repeat the action over and over until they’ve trained you. Yes, you got that  right.  They train you as much as you try to train them, with “try” being the operative word.

Your Cat Flops Down To Convey Trust

A cat flopping down in front of you is also saying that it trusts you completely.  Laying on its back with its belly exposed is one of the most vulnerable positions for a cat. On the ground and especially on its back makes it difficult for a cat to get up and run away.

As with most mammals, a cat’s vital organs are in its midsection and are some of the body’s softest parts.  When a wild cat hunts and catches its prey, it goes for the belly immediately after immobilizing it.  In the wild, once these organs are damaged, there is zero chance of survival.

Your Cat Is Inviting You To Play

When a cat flops down in front of you, it may be wanting some playtime.  As kittens, cats play by rolling on one another, running, and even falling on top of each other.  Laying on their backs allows them to bat with their front paws and kick with their hind legs.

You can test this theory by waving a piece of string in front of a cat on its back.  Don’t get too close that it inadvertently scratches you or tears a hole through your sleeve with its sharp claws.

Your Cat Flops Down To Cool Off

Another reason why a cat unexpectedly flops down is that it may be trying to cool off.  More especially if the surface it has chosen to flop down on is dirt, grass, or cool floor tile.  Spreading its body out increases the surface area exposed to air, and thus they cool off quicker.

Cats do have a higher core body temperature and can take the heat better than us. Despite this trait, they can still possibly get overheated in the sweltering summer months. The best temperature range for a cat to be in is anywhere from 60 to 90 degrees Fahrenheit.

Your Cat Is In Heat

If a cat flops down on the ground in front of other cats, it may be in heat.  Female cats flop down and roll exclusively for male cats when they are in heat.  Of course, if the cat in question is male or a spayed female, then you can immediately debunk this explanation.

Aside from flopping down in front of the males, a female in heat also has other tricks up its sleeve. This would include increased vocalization, incessant rubbing on objects, and constantly putting its rear up in the air.  New cat owners may want to spay their frisky feline rather than put up with the meowing and constant neediness.

Your Cat Flops Down To Scratch Itself

Cats have a pretty good arsenal when it comes to grooming and personal care. Those sharp claws and the papillae on their tongue are handy tools when dealing with the itchies and scratchies.  However, there are a few spots on its back that no claw or tongue can reach despite its limber body.

Laying down on the ground to scratch an itch is a tactic that cats, and even dogs, resort to. If a cat flops down in front of you and shimmies back and forth, it may be scratching its back. A textured surface such as astroturf, a pebbled floor, or wooden decking will do the trick.

Your Cat Flops Down To Clean Itself

To us humans, it may seem counterintuitive for a cat to flop down on a dirt floor to clean itself. But rolling around in the dirt is similar to a cat using its tongue to clean itself.  The abrasiveness of the dirt gets in the cat’s fur and acts as an exfoliant, much like their tongue bristles.

When rolling on the ground, a large surface area is being rubbed all at once.  Using only their tongue would take them a long time, and cats have better things to do, like sleeping. Aside from getting an exfoliating treatment, the dirt is also capable of dislodging parasites latched onto the cat’s skin.

Your Cat Could Be High on Catnip

Cats may want to play, scratch, clean, or cool off when flopped down on the ground. But then again, they could just be high on catnip.  There is no sense in figuring out where a cat has been; it will find catnip anywhere a catnip plant grows.

A chemical found in catnip called nepetalactone induces unusual and, often, funny reactions from cats. Much like serotonin in human brains, nepetalactone interacts with the “happy” areas in a cat’s brain, causing mood changes.  An increase in playfulness may be the result, but more often, a cat simply flops down on the ground.

Your Cat Is Unwell

One unfortunate reason for a cat flopping down on the ground may be illness.  Cerebellar hypoplasia is a rare ailment that affects a cat’s cerebellum resulting in an inability to control balance or movement.  Ataxia, a sensory dysfunction, could be another medical culprit causing a cat to lose balance.

As a pet owner, be aware if your cat starts flopping down in front of you more often than usual. Observe your cat for other unusual signs and symptoms. If the strange behaviors do not let up, a vet visit may be imminent.

Cat behavior is easy to decipher if you’ve had experience working and living with our feline friends and family.  But if you are clueless about cats and their world, maneuvering around one may seem an uncomfortable activity. Here are some suggestions to start you off with if one decides to flop down in front of you.

So, a cat flops down in front of you.  Do not automatically assume it wants to play or is seeking attention.  Check and see if other cats are in the vicinity, as this feline may just be in heat. If it is wriggling back and forth on a dirt floor, it may be scratching and not asking for a pat.

Go Down to Its Level

Now I don’t mean flop down alongside the kitty.  When a cat drops on the ground and looks up at you, crouch down instead of standing over it. Making yourself smaller by crouching makes yourself less intimidating to a cat already lying on its back.

Put A Hand Out

If the cat remains in this position, slowly put your hand out for it to sniff.  Cats rely heavily on their olfactory sense, and sniffing you is their way of getting to know you.  Once they “meet” you,  they will most likely be comfortable around you.

Do Not Aim For The Belly

While a cat’s belly may be exposed in this position, practice restraint and refrain from petting its belly.  Instead, focus on the sides of the face, its neck, even its chest. While dogs absolutely adore belly rubs, most cats find this ministration a little too disruptive and annoying.

Why is my cat meowing nonstop?

A cat meows to get attention.  Depending on the ferocity of the meow, the cat may simply be hungry or looking for attention.  If a cat meows abnormally loudly, it may be trapped, hurt, or wants to mate if not spayed or neutered.

If your cat has been fixed and is meowing a little too lustily, check to see if it is hurting or in pain.  Better yet, take your cat to the vet for a thorough observation.

Should I declaw my cat?

Declawing cats may have been common ages ago, but research shows that declawing is akin to cutting off one’s fingers.  Please do not declaw your cat, as claws are your cat’s only defense mechanism.  If you are worried that your cat will scratch your furniture, get a parrot.