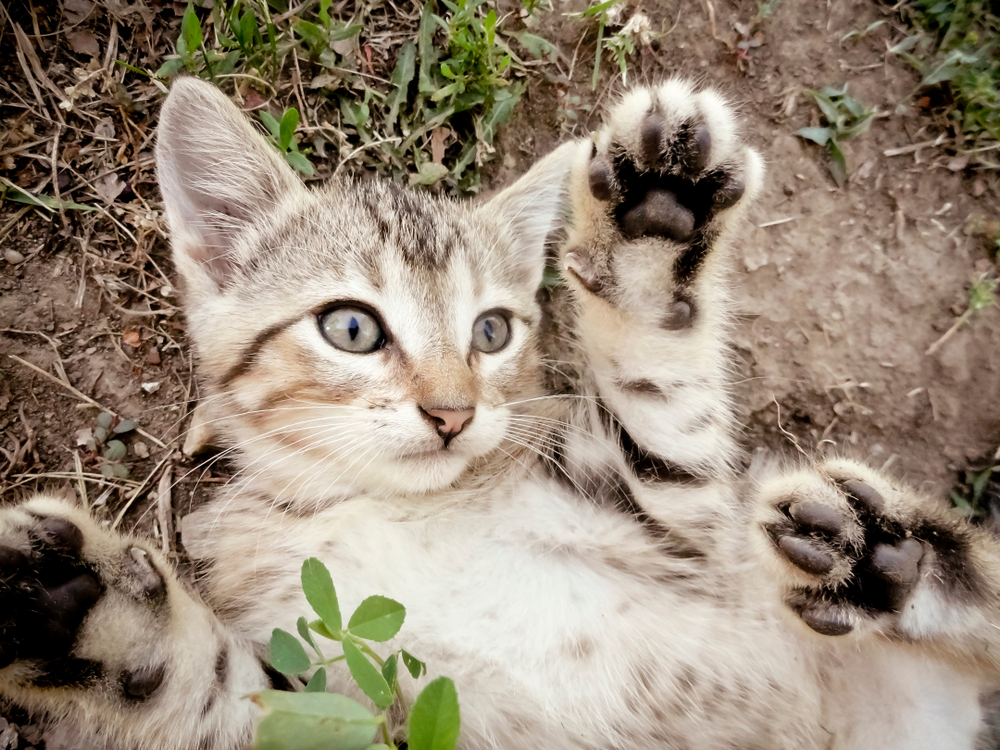 Cats usually get a reputation for being extremely clean animals that can’t stand getting dirty. After all, they’re prolific groomers, always primping and cleaning their fur, and they even discreetly bury their waste in their litter box. But, with all their self-cleaning habits, cats also are just as eager and willing to roll in mounds of dirt.

Cats roll in the dirt for numerous reasons, including to cool off, disguise their scent, scratch an itch, or even mark their territory. But, your feline friend could also feel playful, be enjoying a dirt massage, or perhaps they had too much catnip. Most reasons your cat rolls in the dirt are harmless, but contact your vet if the habit persists.

More than likely, if your cat occasionally enjoys a dirt bath, you don’t have to be concerned. (Except maybe for the fate of your white carpet or new furniture.) Knowing some of the most common reasons why cats roll in the dirt can help put your mind at ease.

Why Is Your Cat Rolling In The Dirt?

If you’re stumped every time you find your frisky feline having a field day in a dirt pile, it’s understandable. Cats are natural-born cleaners, spending a good part of their day on self-grooming.

But that doesn’t mean they don’t like to get dirty sometimes, and often, that dirt roll has a specific purpose. So, here’s a look at some of the most common reasons cats choose to roll around in the dirt.

Cats Roll In The Dirt To Mask Their Scent

One of the reasons cats roll in dirt is to disguise their scent. The most likely reason for this goes back to instinct and cats in the wild.

When hunting, cats would roll in the dirt to mask their scent and hide from prey. This made it easier for them to sneak up on their game and get a tasty supper. But, your cat could also be trying to ditch a bad scent they happened upon.

If your cat goes on an adventure and gets into something less-than-pleasant, they might not like the smell. But, what if your cat equally doesn’t like to get wet? Instead of washing off the scent with water, your cat covers it up with dirt instead.

So, sure, your cat’s dirty, but to them, they smell a whole lot better than they did. Don’t think your cat has an offending odor they’re trying to squelch?

Well, that doesn’t mean it isn’t there; you just can’t discern it with your human nose. But, other cats can undoubtedly catch a whiff of the unpleasant scent. Cats have a much more fine-tuned and stronger sense of smell than humans.

Many animals will roll in dirt to cool off or stay cool, including pigs, dogs, and cats. If your cat’s rolling takes place more so on hot days, this is likely why. Below the top layer of soil, the dirt is nice and cool, providing the perfect relief on a summer day.

If you’d prefer your cat not to roll around in the dirt, you can try a cooling mat. This will provide your furry friend with a cleaner alternative for staying cool in the heat.

These mats help absorb body heat while allowing your cat to stay comfortable. You can purchase a size suitable for a cat at pet stores or online for between $10 and $20.

Cats Roll In The Dirt To Scratch An Itch

Have you ever had an itch you just couldn’t scratch? You would do anything to get relief; many people stand up against a door frame and move from side to side. Other people buy backscratchers to reach those hard-to-get-to spots.

But, your cat can’t hold a back scratcher, so they try the next best thing; they rub against something. Or, if that pesky itch is on their back, your cat will likely roll in the dirt to squelch it.

Despite their fantastic flexibility, sometimes this is the only way your cat can reach certain spots. But, watch closely if you think itchiness is the reason your cat is rolling in the dirt.

Sometimes, your cat could be dealing with parasites, like fleas or ticks. Do a skin check if you notice your cat’s rolling is constant, plus they’re rubbing against furniture and other surfaces.

You might be able to spot some other signs of pest infestation, like irritated skin, raw spots, or hair loss. If so, or you suspect parasites, visit the vet. Your vet can confirm your suspicions and advise you on the proper course of action.

They might suggest you put your cat on flea and tick prevention medication, like Frontline Plus or Revolution Plus. They can also help you rid your cat of the immediate aggravation with other medicines, a flea bath, or some combination.

Rolling In Dirt Can Help A Cat’s Digestive Health

Okay, so you’re probably already asking yourself, how does rolling in dirt help my cat’s gut? Well, the soil is full of all sorts of things, including helpful bacteria. Your cat rolls in the dirt, covering itself with these tiny microbes.

Later, when your cat is grooming itself for the 100th time, they’ll ingest these friendly bacteria. These bacteria (probiotics) are critical for your cat’s overall digestive system, breaking down food and defending against gastrointestinal issues.

Of course, your cat can also get these probiotics from their diet. But isn’t it clever of them to figure it out on their own?

Rolling In The Dirt Is Fun

As humans, we tend to overthink a lot of things–like why our cats roll in the dirt. Many times, your cat might just think rolling in the dirt is fun. It feels good, they’re happy when they do it, and that’s all there is to it.

It’s your cat’s way of giving themself a soothing massage and simply being playful. Consider your cat’s normal activity level. Do they have ample opportunities for exercise and activity? If not, rolling aggressively in the dirt could be a way for them to blow off some steam.

But, if you’d rather your cat not bring dirt into the house, give them other ways to expend some energy. Have regular play sessions with your cat, provide them with proper cat toys, and give them lots of belly rubs.

If you’re short on time, look for interactive toys that can keep your cat engaged and stimulated. You can find toys that encourage your cat to seek out small treats or toys. Other toys will move on their own, making your cat chase them.

You can also get creative. If your cat likes to swim or splash in water, you can set up a large water bowl with toy fish. Note: Make sure you’re nearby whenever your cat plays with water.

Cats are territorial creatures, and they won’t hesitate to let another cat know that they’ve crossed a line. Cats have 9 primary scent glands spread over their whole body.

These glands are on their cheeks, paws, tail, and more and are main way cats communicate with each other. Ever wonder why your cat always rubs their face on you? They’re marking you as their very own.

So, when your cat starts rolling around in the dirt, they’re leaving their unique scent in that place. This marks their spot and tells other cats, “Hey, this place is taken, move on.”

Sometimes, your cat might pick up the scent of another cat. If this happens in your cat’s territory, your cat will roll in the spot to replace the other cat’s scent.

Your Cat Could Be In Heat

Some studies suggest that cats roll in the dirt when they’re in heat. Therefore, if you have an intact female cat rolling in the dirt, this could potentially be the reason.

Male cats might also roll in the dirt to try and attract the attention of nearby female cats. It’s almost like feline flirting.

Did Your Cat Have Some Catnip?

Did your cat recently got a hold of some catnip or enjoy a catnip treat or toy? This could be why they’re rolling around and wriggling in delight. Catnip can trigger various reactions in cats, including rolling, random meowing, and other interesting behaviors.

But the effects are typically temporary. However, in some cases, your cat could have gotten ahold of something they shouldn’t have.

Therefore, if you feel like your cat’s behavior isn’t right, trust your gut. Call your vet and get your furry friend checked out to be safe.

Is Your Cat Trying To Tell You Something By Rolling In The Dirt?

Cats communicate in all sorts of ways and often use their bodies to talk with their humans. If your cat is rolling around, they could be telling you they want to play, are sleepy, or have fleas.

The key is to observe the big picture. Is your cat frantically rolling or lazily twisting side to side? Do they seem fine when they’re upright, or do they keep trying to rub against everything they can touch?

You know your cat better than anyone, so observe their behavior and trust your instincts.

Why does my cat like to roll on cement?

Most likely, if your cat is rolling on cement, especially if it has a rough texture, they’re scratching their back. If the ground is cold or cool, your cat could be trying to lower their body temperature.

How can I clean my cat after they roll in the dirt?

To get the dirt off your cat without the hassle of bathing your cat, try pet wipes. They can help get the majority of the dirt off.

Then, brush your cat outside with a good grooming brush. Finally, finish up with another wipe down. Your cat will likely finish off the rest during their next self-grooming session.