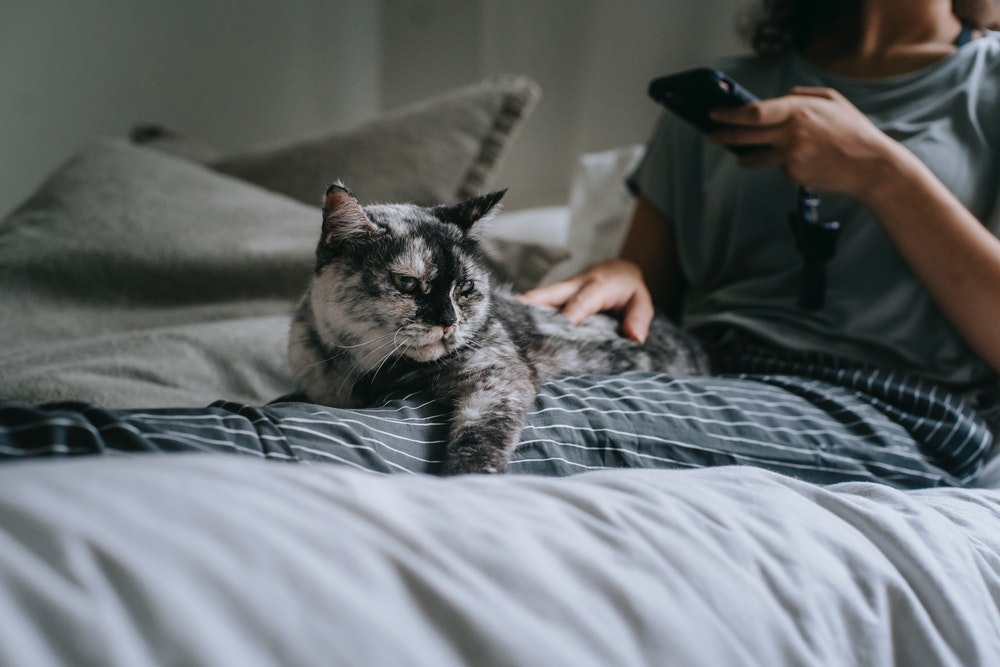 If you have ever had the pleasure to give a kitty a back scratch, you may remember their peculiar response. What started as an innocent scratch can quickly turn into cat scratch city or what some call pet-induced aggression. So what’s the deal with our feline friends?

Cats’ backs have a very unique genetic makeup, specifically the base of the tail. At this spot, they have a high concentration of ultra-sensitive nerve endings. When petting their back, overstimulation of these nerves can turn irritating, thus evoking their “weird response.”

So is this a good or bad thing for your cat? It’s important to remember that this does feel good for them; reading body language is imperative for their enjoyment. Thankfully, there are lots of ways to help you identify just what your kitty is telling you.

The History Behind Domesticated Cats And Understanding Their Responses

House cats are fascinating for a lot of reasons, frequently mimicking their wild feline counterparts. Nature is constantly showing us similarities between the wild and domesticated cat. Modern-day domesticated cats have only moderate genetic differences from ancient wild cats, meaning that they’re still wired very similarly.

Historically, this has been the theory of why domesticated cats have such distinct personalities demonstrating solitary behaviors, like wild felines. Though this seems like enough time for evolution to work its magic, for cats, this is not the case. Knowing this, we can understand their needs just that much more.

What’s The Science Behind Your Cat’s Anatomy?

On average, a cat’s tail is around twelve inches, the base of which is the hot spot of their nerve-ending clusters. For cats, they have what are called “safe zones,” such as the chin or the top of the head. These areas are more comfortable for your cat when you pet them.

In the wild, felines will typically communicate via visual and chemical messages, unlike other species where physical communication is king. This is not to say that you shouldn’t scratch your cat’s back. On the contrary, cats crave affection, just like any other animal, no matter how aloof they may seem.

In some ways, scratching their back can actually help them spread their scent. The sebaceous glands on a cat secrete hormones that mark their territory, either you or your home. This act of affection can strengthen your bond with your cat.

Cats are also known to have higher stress levels than other animals, particularly cats that are described as tolerant versus aggressive. This could be due partly to how humans tend to push the limits with their pets’ affection needs. If your cat is giving stress signals, it’s important to retrain yourself from petting.

It is important to note that the sensitive nerve endings at the base of the tail also signal a sensual response, specifically for female cats. This is for spreading their pheromones to a potential mating partner and for sending a sensual invitation.

When a cat is repeatedly petted in this area, their stimulation can be sensually overwhelming. If your cat enjoys a back scratch but becomes overwhelmed, let them take a break. After your cat has walked around, they will likely return to you, ready for another back scratch.

How To Identify Petting-Induced Aggression

It’s easy to forget that pets have opinions and preferences sometimes. After all, don’t all pets like a good back scratch? Thankfully, our cats are great at letting us know when enough is enough; you just need to understand their signs.

Cats tend to get a bad rap for being aggressive or unpredictable. It’s important to recognize and respect your pet’s signals to deepen your bond and ensure their happiness. As socially based creatures, humans have a hard time understanding that sometimes a cat needs to communicate affection indirectly.

We have already gone over a few of the signals that you can interpret as “please stop.” There is one sign, however, that is more complicated than others – the elevator butt.

This sign is likely the hardest to identify as good or bad because it largely depends on the temperament of your kitty. Are you having a hard time understanding this signal? Now is an excellent opportunity to get to know your cat more.

The technical term for this odd response is lordosis. There are, however, other reasons for this response that don’t involve back scratches. This can be a romantic invitation, an introduction, or a signal that they want to play, stop or keep going.

Pretty confusing, right? If your cat is flicking, fluffing, or lowering their tail while their rear is raised, stop immediately. If they are purring, raising their tail and keeping it straight, or rubbing against you, this signals to keep going.

The Best Ways To Pet Your Cat

There is no right or wrong way to pet your cat. There are, however, certain strategies to help identify your cat’s petting preferences.

The best way to pet your cat is simply to watch their body language and follow their lead. A good rule of thumb is to monitor your cat’s purring. If it stops, this is likely a symbol that they are no longer enjoying your petting.

Some cats suffer from a disorder called Feline Hyperesthesia Syndrome (FHS) or rolling skin syndrome. This is when a cat’s nervous system has particularly sensitive nerves causing one simple stroke to be a painful shock.

Certain breeds are more prone to this disorder — Persian, Siamese, Abyssinian, and Burmese are commonly afflicted. The first episode typically shows up during the teen years of a cat, between 1 and 5 years old. Research has shown that male and female cats are equally susceptible.

Seek veterinary help if you suspect that your cat may suffer from FHS. Here are a few symptoms that they may display:

It’s important to note that this is not a simple disease to diagnose. Your pet will likely undergo a long list of tests: dermatologic, musculoskeletal, and neurological are the most common. Some medications can help manage their symptoms, but behavioral and environmental changes are helpful to increase their comfort.

How To Know If Your Cat Is Struggling With Stress

What can often come across as antisocial behavior can actually signify that your cat is struggling with stress. If you are struggling with high stress, your kitty is likely internalizing yours secondhand. This can significantly affect their health and behavior.

Cats are creatures of habit. Changes in the environment like moving, having a new person move in, or getting a new pet are common examples. Cats are especially good at hiding health concerns, so it’s imperative that you pay attention to the small things.

Signs that your cat may be under stress are inappropriate urination, skin and coat changes, and a lowered immune system. One option to decrease stress-induced aggression is to use a feline pheromone spray.

A study done in Seoul, South Korea, was able to link feline interstitial cystitis – an inflammatory disorder – with life changes. The life changes specifically noted in this study were not enough vertical space, living with other cats, and apartment living.

One of the best things that you can do for both you and your cat is to lower your own stress. This will affect not only the health of your cat but also yourself.

What are the best ways to strengthen your bond with your cat?

One of the most important habits for strengthening your bond is to avoid punishment. Pets don’t process things the same as humans, and associating punishment with avoiding a behavior is not beneficial.

Instead, try positive reinforcement such as treats, play, and physical affection to increase good behavior. Before you know it, your cat will sit in your lap whenever they get the chance.

Can your cat help lower your risk of a heart attack?

Petting an animal has been shown to lower blood pressure and can also increase your endorphins. One study found that your fuzzy companion can lower your risk of a heart attack by as much as 30%.