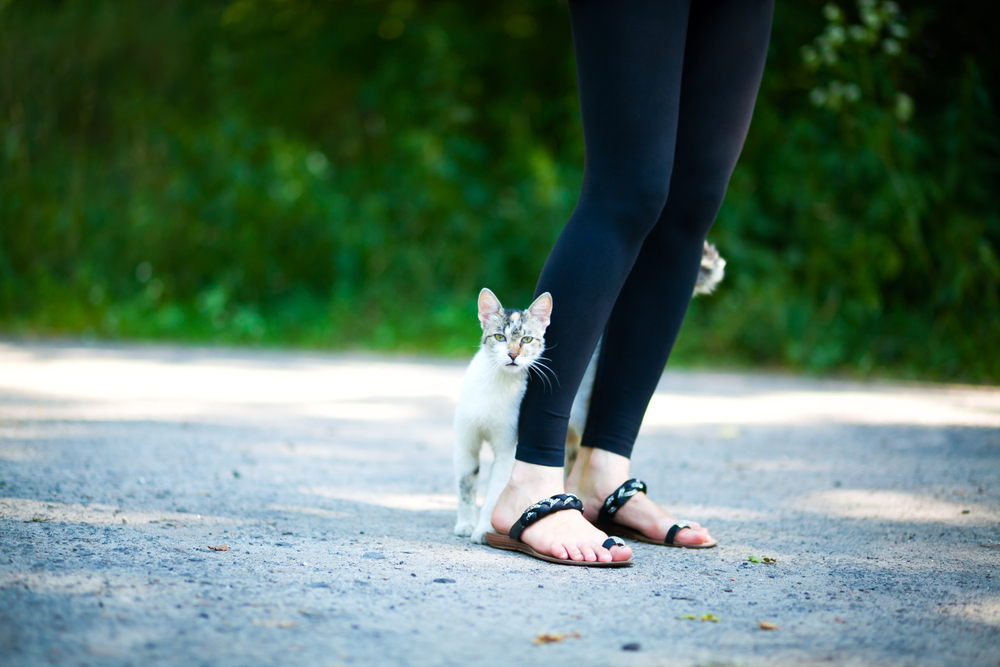 Have you ever walked down a lonely street and encountered a friendly feline you’ve never seen before in your life?  If the cat in question deems you worthy, you will find it getting close to you while maintaining eye contact.  With a little meow and likely a purr, it may just start rubbing its body on your legs.

Cats, whether stray or not, rub against your legs for a couple of reasons.  First, they want to get to know you through your scent, and secondly, they are essentially claiming ownership over you.  Cats have olfactory glands all over their face and rely heavily on their sense of smell to get information about their environment.

Cats sure do have weird habits that people who don’t live with cats find strange.  But if you take the time to get to know them, you’ll see that they are pretty predictable after all.  Rubbing, purring, meowing, arching their back, all these cat behaviors have a reason behind them.

Main Reasons A Stray Cat Rubs Against Your Legs

Typically, if a stray cat approaches you and rubs against your legs, you can assume it’s a positive behavior. Cats usually rub against someone to gather information, claim ownership, or simply say hello.

Cats learn head rubbing behavior when they are kittens. They learn it from their mother, who uses it as a sign of affection. So, when a cat wants to say hello to a human, they will rub against the legs to show affection.

If this is the reason for the cat’s head rubbing, it will usually have a purr or friendly meow accompanying it.

Cats often rub against their owners’ legs to claim ownership of them, basically saying, this human is mine. They do the same thing with the furniture, walls, and anything else they can get a hold of in their environment.

Cats are territorial creatures, and they want anyone who comes along, man or beast, to know this is their turf. So, cats mark their territory in all sorts of ways using various scent glands throughout their bodies.

If a stray cat starts to rub against you, it could mean they’re staking a claim. Perhaps they’re hoping you’ll become their permanent human.

Another possibility if you happen along a friendly stray cat is that they’re encouraging you to pet their head. Cats aren’t particularly fond of being pet on their back or sides, much preferring a scratch behind the ears.

Therefore, using their head to rub against you could be their way of saying, hey, pet my head. However, once again, look for other signs that signal an invitation to give a friendly pet.

Cats depend greatly on their sense of smell to assess their surroundings and gather essential information. Therefore, when a cat rubs against your legs, they might just be investigating, trying to determine who you are. They also can get helpful clues about whether you have other animals or anything else interesting.

It’s critical to remember that if a strange cat rubs against you, it doesn’t automatically mean they want a friendly pat. If the cat is simply gathering intel, they might not actually want you to touch them. That is why paying attention to the cat’s other signals and behavior is so important.

What Should You Do When A Stray Cat Rubs Against Your Legs?

Obviously, the cat thinks you are friendly enough for it to approach you and get this close.  Don’t be alarmed; keep the cat within sight but do not maintain unbroken eye contact.  If you stare at a cat without dropping your eyes occasionally, the cat will consider that threatening behavior.

Again, just because the cat decides you’re safe to approach doesn’t necessarily mean it wants to be touched. If the cat starts rubbing its face on your leg, stand still and look for more signs of welcome.  Purring is a good indicator, along with a raised tail.

Bend at the knees and put your hand out in a loose fist for the cat to rub on your hand.  Once it rubs on your hand, then you may try to pet it.

Limit your ministrations to the cat’s forehead, bridge of the nose, and behind the ears.  Remember, cats love to be petted on the head rather than their back.

Be Aware Of Signs Of Feline Aggression

It’s always important to be extra vigilant when dealing with a stray cat. Especially since you don’t know if they might be carrying diseases like rabies. So, even if a kitty seems friendly, be on the lookout for potential signs of feline aggression.

The first indicators that a cat’s uncomfortable are a twitching tail, dilated pupils, and ears laying flat against their head. If you notice a stray exhibiting these signs, it’s best to stop your interactions and move away from them.

If you persist, the cat might puff up its tail and start hissing or even growling. They’ll also get a very intense stare and start to stand with a rigid posture, almost unmoving. These are definitely signs for you to back off because the following steps are swatting, scratching, and biting.

What If A Stray Cat Attacks You?

If a stray cat attacks you and breaks the skin, it’s possible you could be exposed to certain health issues. You can try to pinpoint a possible owner of the cat to get proof of vaccinations.  Otherwise, you can try to catch it to get it tested, but that could lead to even more injuries.

It could also waste precious time. A cat bite or scratch could lead to tetanus, rabies, or various infections.

If you aren’t sure of the feline’s rabies status, you’ll need to undergo rabies treatments. It’s essential to get to the doctor immediately as the first dose needs to be administered within 24 hours.

The doctor will typically apply medicine at the wound site and the first vaccine dose to try and neutralize the virus. Overall, there is usually a series of fours shots spread out over several days. These shots are typically given in the arms or legs, not the stomach, as often rumored.

Another possibility is tetanus unless you yourself have had the tetanus vaccination within the last ten years. Otherwise, the bacteria can enter your bloodstream, causing muscle spasms, lockjaw, and even death.

Cat bites and scratches can also expose you to other bacteria that can cause a host of issues. So, play it safe; a trip to the doctor is always a good idea after a stray cat attack.

What should you do if you see a stray cat?

If you see a stray, you can call animal control to pick it up as it could be a lost pet. They will check for a microchip and hold the cat for a certain number of days for the owner to claim it.

Otherwise, if the cat is adoptable, it will get put up for adoption to try and find a forever home. At that time, you can elect to adopt the kitty if you so choose.

However, it’s also a good idea to get strays off the streets to avoid overpopulation. But, don’t try and catch the stray cat yourself; this could lead to injury.

If the cat has a collar and seems friendly, you can see if it will approach you. If it allows you to pet it, you might be able to get a glimpse of their ID tag. Then you can contact the owner to arrange for a reunion.

What if a stray cat starts hanging out in my yard?

In some cases, a stray cat might adopt you. They’ll simply start turning up on your porch and likely show some friendliness toward you.

If you start to feed them, you can bet they will stick around. However, if you decide to maintain this relationship, it’s vital to get your newfound feline to a vet ASAP. This way you can get them checked out and properly vaccinated.

You can try and catch the cat in a carrier, but be patient. It’s best to leave the carrier open with some treats inside. Leave it this way for a few days so your cat gets used to it.

After several days, when the cat goes in to get the treats, you can close the carrier. Then, bring your cat to the vet while they are still in the crate.

Why does my cat headbutt me?

Headbutting is another way cats show affection and claim ownership. If your kitty comes up to you and head butts you, they’re basically saying, I love you.

Cats do all sorts of strange things, like rolling around on concrete, licking blankets, kneading pillows, and more. Usually, all of these behaviors, albeit strange, have a particular purpose.