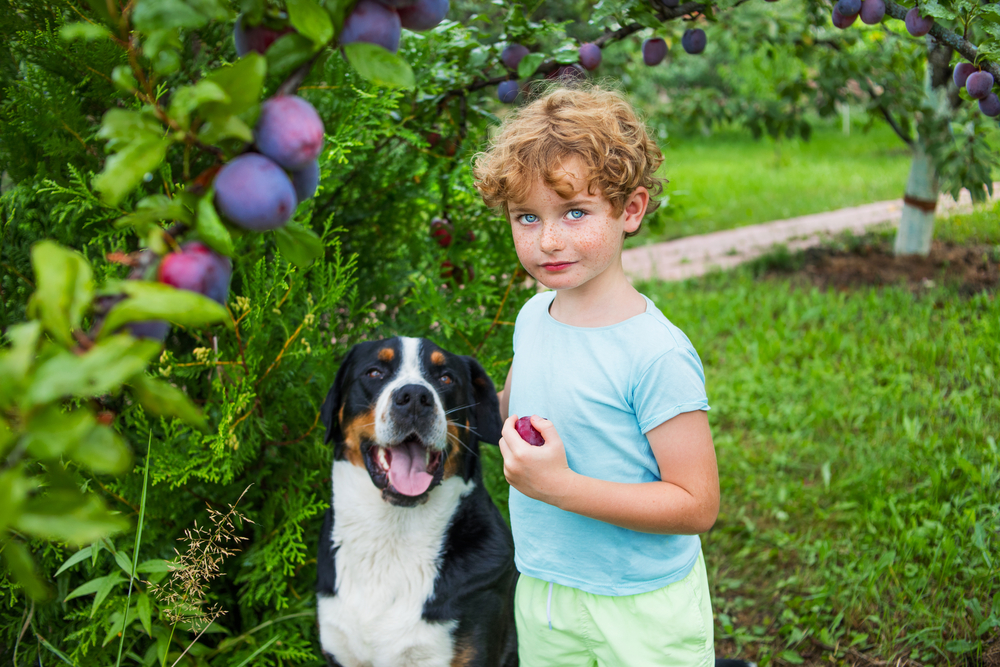 Plums are delicious, juicy fruits. But are they a good choice as a snack for your dog? Plums are sweet and may tempt your dog; however, caution should be used with these fruits.

Dogs can eat plums, with a few exceptions. Dogs should never be fed or allowed to eat the pit of a plum. Roots and leaves are off-limits too. The flesh of the fruit can be shared with dogs, but only in small amounts.

Plums are a healthy snack for both people and dogs alike. Plums contain vitamins, minerals, and fiber and are low in calories, making them preferable to some commercially made treats.

Are Plums Dangerous For Dogs?

Plums are also high in sugar. A single plum contains about 7 grams of sugar. Therefore, plums (and other fruits) are not good choices for dogs that are diabetic.

Plums may also cause gastrointestinal upset in dogs due to their high fiber content. Whether or not plums upset a dog’s gastrointestinal tract is dependent on how many plums are eaten and how sensitive the individual dog is to fiber.

If your dog has eaten plums and you observe any of the following signs, you should seek veterinary advice as soon as possible.

Contrary to popular belief, there are many varieties of edible plums. Some varieties that you may encounter in your local grocery store include:

Plums are categorized scientifically into the Prunus genus and Rosaceae family. The most common prunes in North America are the Prunus Domestica and Prunus Americana. Both of these genera have many cultivar varieties.

The flesh of all of the above plums is non-toxic to dogs.

Plum pits pose the most risk to a dog that has ingested plums. Not only can swallowing a plum pit lead to plum (cyanide) toxicity, but the pit is also non-digestible and may lead to choking or intestinal obstructions.

Though small amounts of plum flesh are non-toxic and safe for your dog, it isn’t uncommon for me to see cases of plum toxicity. This mainly occurs when dogs live near a plum tree and consume a large amount of the fallen fruit.

Plums are grown on small trees, and dogs may eat the fruit directly from the tree or the fruits that have fallen to the ground. Each fruit contains one large pit, and this is where the majority of toxins are found.

Plum pits, leaves, and roots contain the toxins hydrogen cyanide, amygdalin, prunasin, and cyanogen. When a dog consumes the pit, the acids in the dog’s stomach will dissolve the pit’s outer coating, allowing the toxins to enter the dog’s body.

Plums are not the only fruit that pose a risk of toxicity. Apple seeds, peach pits, cherry pits, and others also contain hydrogen cyanide and are very dangerous for dogs.

Symptoms of plum toxicity include:

Diagnosis Of Plum Toxicity In Dogs

If you suspect that your dog has consumed many plums, the pit of a plum, or has chewed on the leaves or roots of a plim tree, you need to seek emergency veterinarian care as soon as possible. This is a life-threatening emergency that requires prompt treatment.

When you arrive at the emergency veterinary hospital, be prepared to tell the doctor how many and what parts of the plums that your dog ate.

One sign that is almost always seen in dogs with plum (cyanide) poisoning is the presence of bright, cherry-red gums. This occurs due to the toxin’s effect on red blood cells.

A dog suspected of plum toxicity should receive an urgent and complete physical exam, an oxygen level measured on a pulse oximeter, and lab work. The veterinarian will request a complete blood count (CBC), chemistry panel, and a urinalysis.

With the results of these tests, the doctor will be able to diagnose plum (cyanide) toxicity and recommend a treatment plan for your dog.

Treatment Of Plum Toxicity In Dogs

Treatment for plum (cyanide) toxicity in dogs should be instituted right away. Depending on how long it has been since the dog ingested the plums, it may be possible to use decontamination methods to remove the undigested toxin from the dog’s system.

Be sure that you are able to tell the doctor how long it has been since your dog ingested the plums. This will enable them to decide if decontamination is a viable option.

In addition to removing any undigested plums from the dog’s stomach, it is possible to remove cyanide from the bloodstream.

The veterinarian will administer either sodium nitrite or methylene blue intravenously, leading to methemoglobin formation in the blood. The created methemoglobin will bind to the cyanide molecules to create cyanmethemoglobin. This compound is non-toxic and will be cleared by your dog’s liver.

Your dog will very likely need to be hospitalized and monitored closely for any ongoing complications. During this time, your dog will receive intravenous fluids to support their organ function and to aid in flushing out the toxin from the bloodstream.

Prognosis For Plum Toxicity In Dogs

The prognosis for a dog that has consumed too many plums or the toxic parts of the plum tree depends on many factors. The most crucial factor is how much of the toxin has been consumed. The delay between ingestion and treatment can also have a large impact on the dog’s prognosis.

Can Dogs Have Plum Juice?

Plum juice is not toxic to dogs. Small amounts of plum juice will not likely cause any issues for your dog, whereas large quantities are likely to cause gastrointestinal issues. It is not recommended to give plum juice to dogs due to the high sugar content and the possibility of causing diarrhea.

Cooked plums, which have the pit removed, are not toxic to dogs. It is essential to keep in mind that even cooked plums are high in sugar and fiber and may lead to gastrointestinal upset.

A dried plum is known as a prune. Dogs can safely consume very small amounts of prunes. However, as prunes have the water extracted, even smaller amounts can lead to gastrointestinal issues, especially diarrhea.

My Dog Ate A Plum – What Should I Do?

First, try to determine how many plums and what parts were ingested. If your dog ate just a tiny amount of the flesh of the plum, you likely do not need to worry. Your dog may have mild gastrointestinal signs such as vomiting or diarrhea.

If your dog ate large quantities of plums, any pits, or chewed on the leaves or roots of a plum tree, you need to take your dog to an emergency veterinarian right away.

It is likely ok to offer your dog a few small bites of plum flesh as a snack or treat. However, large amounts may cause gastrointestinal upset, and any amount should be avoided in dogs that are diabetic.

If your dog has ingested any of the toxic parts of a plum or plum tree, you must seek veterinary care immediately.

Other Frequently Asked Questions About Dogs And Plums

Just like with plums, it is safe for dogs to eat small amounts of peach flesh. Dogs should never be allowed to eat the pits or leaves and roots of peach trees. If your dog has consumed a peach pit or other toxic part of the peach tree, you need to take them to a veterinarian immediately.

Most commercial plum jam or jelly actually contains very little plum. These spreads are safe for dogs to eat as they are non-toxic; however, they are very high in sugar and should likely be avoided. It is also important to ensure that dogs are never fed jam or jelly that contains artificial sweeteners such as xylitol, as this is very toxic to dogs.