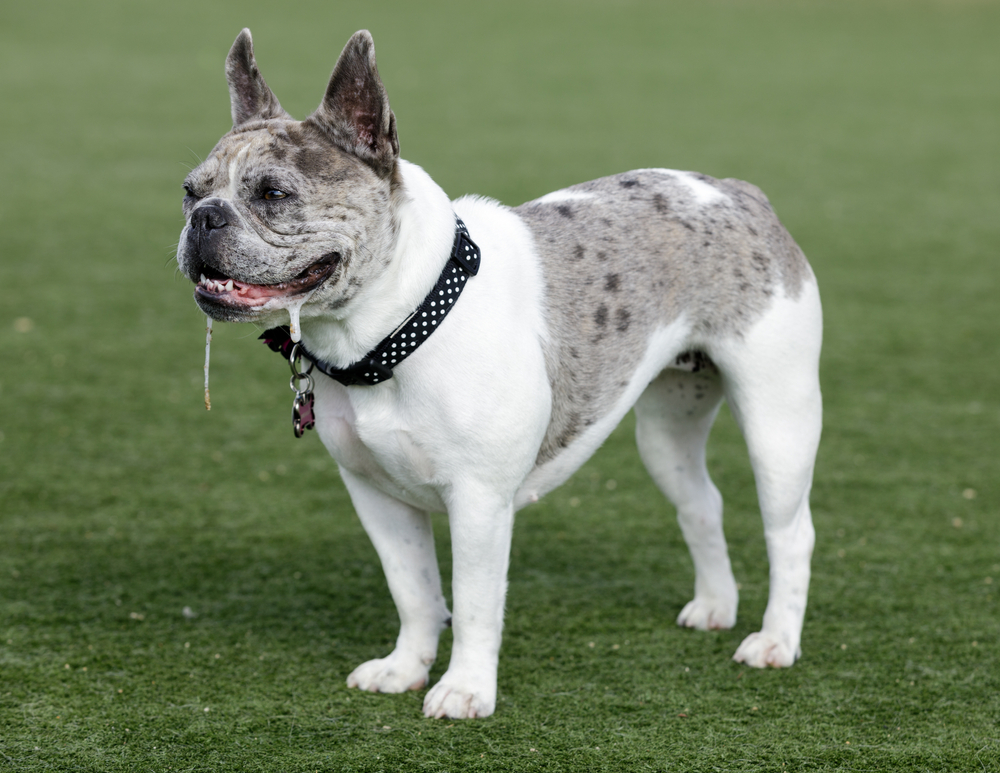 Although some breeds drool more than others, just about every dog drools on occasion. Some “drool triggers,” like food, make sense. However, others aren’t as obvious. You’ve probably noticed your dog drools excessively around other dogs. Let’s explore the reasons why your dog salivates so much when they see another canine.

Dogs drool excessively around other dogs when they are either excited, afraid, anxious, or nauseous. Being around other dogs is both exciting and stressful for them. As a result, their adrenal glands end up producing more saliva than usual.

To learn more about this interesting behavior, keep reading. While the excess drool itself is pretty unpleasant, most of the causes for it are completely normal.

Typically, dogs produce excess saliva as a response to this spike of emotions. These responses are stimulated and regulated by their adrenal glands located just in front of their kidneys.

Your dog’s adrenal glands produce various hormones, from steroids to cortisol and more. These hormones serve many important bodily functions. Most importantly, they regulate body systems and control responses to stimuli like stress, excitement, or anxiety.

Essentially, drool is a byproduct of your dog being more excited or alert than usual. For example, when you open up a snack, your dog salivates because they are excited to eat.

Alternatively, you might have noticed your dog tends to drool more when they are around strangers. This is because they are excited and anxious in a situation that is unfamiliar to them.

As you might imagine, most of the reasons why dogs drool are normal, aside from illness or dental issues.

Why Dogs Drool Around Other Dogs

You now know the basics of drooling and what causes such a slimy biological response from your dog. However, you might still wonder why your dog drools so much around other dogs.

Like we touched on earlier, dogs, like humans, have a range of biological responses to external stimuli. These responses look different than what we’re used to as a species. While a human might start sweating when they become anxious or nervous, dogs tend to drool or pant.

Being around other dogs causes a dog to experience a range of emotions. Depending on the dog’s breed, their temperament, and many other factors, these emotions will vary.

Think of when your heartbeat increases when you’re at a party, for instance. Various external factors cause your heart rate to go up, from loud music to talking to potential strangers. These factors aren’t inherently negative, but they will still cause you to be more alert than usual.

In the same way, various factors will cause a dog to drool more around other dogs. Some will be more fearful, while others might be excited and hyperactive. Either way, though, the heightened emotional state will cause them to drool.

Drooling Due To Excitement

One of the most common stimuli that will cause a dog to drool excessively is excitement. As you probably would imagine, many dogs get very excited around each other. Dogs tend to rely heavily on their keen sense of smell, and every dog has their own unique scent.

Normally, when your dog is alone at home, they are used to the scents in their environment. However, when they come in contact with other dogs, they are overloaded with new sights and, more importantly, smells.

Drooling as a response to excitement is especially common in more hyperactive breeds. From golden retrievers to pit bulls and even chihuahuas, these dogs drool often when they’re excited.

Still, all dogs tend to drool a bit more around each other, regardless of breed. Dogs are social animals and socializing with each other is exciting for them! Just be sure to look out for flying strings and wads of drool if you’re nearby.

Drooling Due To Fear

Another common reason why dogs drool more around each other is fear. Fearful responses to other dogs are especially common in puppies. This is because they have not been properly trained or socialized yet. As a result, they aren’t used to being around other dogs and will drool excessively out of fear.

Additionally, dogs of all ages who aren’t properly socialized will be more fearful around other dogs. This is why early socialization is so crucial.

If your dog is drooling due to fear around other dogs, you’ll notice a few other fear responses, too. Some of these include running, hiding, panting, and even nipping defensively.

Drooling Due To Anxiety

This reason often overlaps a bit with fear, though anxiety isn’t inherently negative. It is normal for even the most docile and laid-back dogs to become a bit anxious around one another. In addition, an anxious dog will drool more than usual.

Most dogs experience a bit of heightened anxiety when around each other. While playing with other dogs is exciting for them, it’s also a bit nerve-wracking, too. This is especially true if your pup is around another dog they aren’t familiar with yet.

Don’t be too surprised if your dog drools more if they encounter a new dog. Keep an eye on their behavior for warning signs like snapping or growling. Otherwise, a small amount of nervousness around an unknown dog or group of dogs is to be expected.

Repeated, gradual socialization will help lower your dog’s anxiety around other dogs. Be patient and allow your dog to get slowly used to being around other animals.

Drooling Due To Nausea

Usually, nausea in dogs is a result of illness or overeating. However, many will become a bit nauseous when around other dogs, too. This is especially true for puppies and dogs who otherwise haven’t been properly socialized around other dogs.

If your dog is drooling due to nausea, you’ll notice other symptoms associated with an upset stomach. These symptoms include vomiting, pacing, and panting.

It’s best to get your dog somewhere quiet and comfortable if they become nauseous around other dogs. After all, nausea is often a more extreme manifestation of fear and anxiety.

Try something less intense next time, like bringing them around one dog at a time. You could also bring them to the dog park during a less crowded time of day. Ease them into socialization slowly rather than exposing them to a bunch of dogs they don’t know all at once.

It can be discouraging if your dog gets so upset that they become nauseated around other dogs. However, don’t give up! Your pup will need time to adjust to anything they aren’t used to, such as other dogs. Some dogs just take a bit more time than others.

Excessive Drooling: When To Worry

In general, drool is to be expected when your dog is around other dogs. In some cases, though, excessive drooling can be linked to an underlying health issue.

If your dog is drooling around other dogs but also when they’re alone, look out for other symptoms of illness or injury.

Some symptoms to keep an eye out for include:

Additionally, certain conditions like heat stroke and kidney disease can also cause dogs to drool excessively. If you aren’t sure of the cause of the constant drooling, see your vet as soon as possible.

Do some dog breeds drool more than others?

Interestingly, how much your dog drools around other dogs will also depend partially on their breed.

For example, breeds with very short snouts like French bulldogs or pugs drool more than other breeds. Also, breeds with lots of loose skin around their mouths like bloodhounds also tend to drool excessively.

This is because their mouths are unable to hold saliva very well. As a result, the saliva leaks out the sides, turning into drool.

Why do male dogs drool around female dogs in heat?

Male dogs tend to get pretty excited around female dogs in heat. They are able to sense when a female is in heat thanks to their strong sense of smell.

In fact, males can detect extremely subtle hormonal changes in a female, like when a heat cycle is approaching. Even if a female isn’t in heat yet, males will be able to anticipate when her cycle will start!

Basically, male dogs drool more around females in heat due to their excitement and urge to breed.

Why do female dogs drool around their puppies?

Having puppies is an emotional time for a female dog. Like we touched on earlier, any heightened emotional state can cause a dog to drool more than usual.

A female who has just given birth will be naturally protective and anxious around anyone who comes near her. She may even drool more in general due to the stress and anxiety of feeding her litter.