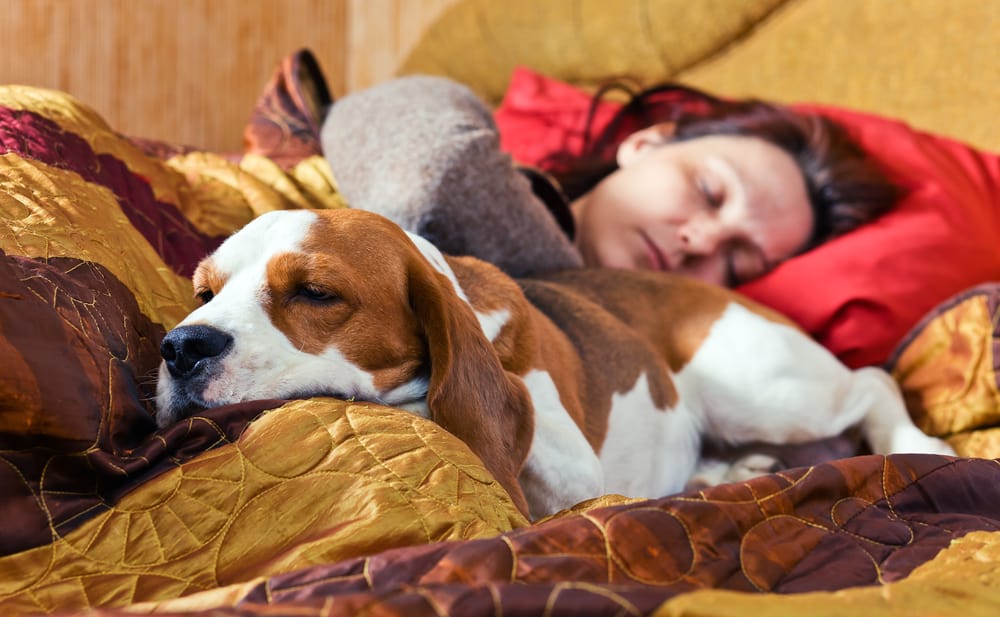 If you’ve ever owned a dog, then we’re sure you’ve been there before; you go to snuggle up, and your four-legged friend decides to get comfortable and stick their furry but right at you. While it’s not the ideal position, it’s a compliment to you.

Dogs sleep with their bum facing you because they trust you, and it makes them feel safe. Your dog knows that it can trust you, so they leave themselves vulnerable to you while they’re able to watch everything else around them. This is due to their instinct to protect their family and themselves.

Let’s dive a little deeper into some more reasons your dog may be sleeping with their bum facing your way. It will help you understand more about your pet. Don’t get too frustrated just yet!

Why Does My Dog Sleep With Its Bum Facing Me?

While the primary reason your dog keeps their butt towards you since it makes them feel safe because they trust you, there are several other reasons which we’ll take you through.

Your Dog Feels Safe Next To You

This all goes back to the safety, protection, and trust triangle. Your dog is naturally going to sleep where it feels safe, which could be with its butt against you while it’s facing the rest of the world. They don’t have to worry about ‘how’ they sleep when they’re around you.

While it may be unpleasant for you, especially if their bum seems to be locked and loaded constantly, you can always put a small blanket over their butt, so it’s not quite so much in your face. Or you can also try and scootch them down, so their butt is against your belly instead.

But overall, this position should make you feel good because it’s their way of saying, “I know you’ll protect me. I know you won’t hurt me.”

Your Dog Is Comfortable With You

When your dog gains trust in you, you become a part of their pack. And once they’re comfortable with you as a person, they will start sleeping with their butt against you. It makes for a peaceful night’s sleep for them, which then helps you sleep well too.

That’s not to say that your dog isn’t comfortable sleeping alone. Once they become familiar with a house or even a room, they’ll have no issues sleeping alone. However, they do prefer to sleep with their human(s).

Trust Is A Part Of Your Relationship With Your Dog

To know whether your dog trusts you or not, pay attention to their body language. They know that because they’re loyal to you that you will be devoted to them back.

So, when they get comfortable in bed with you or on the couch, it’s an instinct for them to put their back to what or who they trust the most. If you’re present, this is going to be you. If you’re not, then this is usually a wall or a corner.

Pay attention to this behavior, especially if you’ve adopted a dog that’s been previously abused. Sleeping with their back end towards you means they’re beginning to trust you.

Your Dog Is Protective Over You

Dogs have an instinct to protect their pack. Since you’re a part of the dog pack now, they want to care for you by providing protection.

There’s a misconception that a ‘guard dog’ will bark, bite, and be aggressive toward any stranger that comes around them or their family. This is not the case. Instead, he’ll be observant of what’s around him and his family.

To protect you, they’ll need to put their back to you so that they can observe everything else around you. And yes, that includes when they are sleeping.

You Encouraged Your Dog To Sleep A Certain Way

You might like being the big spoon when you’re cuddling your dog, and that’s okay! But if this is what your puppy is used to, then this is how they’re naturally going to lay down to sleep.

Perhaps when they lay this way, you scratch their back end or give them belly rubs. This is seen as a rewarded behavior in which they’ll lay the same way every time to get more of those scratches and belly rubs.

The Doggy Wants His Butt Scratched

If there’s one thing that nearly all dogs have in common, it’s that they love their butt scratched. If your four-legged friend prefers to sleep with their bum facing you, this might be their way of asking for butt scratches.

Have you ever had that one itch you can’t scratch, and you ask your friend or spouse to scratch it for you? It feels so good, doesn’t it!? That’s the same for dogs. Where their tail meets their back has tons of nerve endings, so it feels good.

However, notice that we didn’t say all dogs love this. Pay attention to your puppy because some get agitated over this. Also, some may have a flea infestation in the folds of the upper end of their tail. Check the area for fleas and contact your vet for the next steps if you notice an infestation.

Your Dog Has Claimed You

Have you ever wondered why dogs sniff each other’s butts to say hello? This is because they have pheromones, and each dog has its own unique scent.

While humans can’t smell the canine pheromones, other dogs can. So, your pup may be sleeping with their bum in your face to leave their scent on you and mark you as theirs. It’s their way of telling other dogs that you’re their human and they’re your dog.

If your dog is more of the timid type, or maybe a new rescue, they might be sleeping with their back to you because they avoid eye contact. If you’re staring at the beautiful markings of your puppy’s face or simply admiring them, they don’t know that. You might be making your dog uncomfortable.

What you can do, though, is pet your pup while you’re making eye contact and let them know what a good dog they are. Give some verbal affirmations, and show some facial expressions like smiling or blowing kisses.

Not only will this help you and your dog bond better, and it will help with socialization. If your dog is timid, this might be because they haven’t been properly socialized. Taking the time to assist them with this will make all the difference in the world.

Your Puppy Doesn’t Want To Be Bothered

If your dog is exhausted from the day’s activities, maybe you took them to the beach to run and play in the waves or took them on a play date—regardless of the reason, they won’t want to be bothered. So, the way they’ll sleep is facing away from you with their back to you.

Just like how you can feel people looking at you, your dog gets the same sense. So, if they peek an eye open to you staring at them, it might make them want to stay up and play or spend time with you. Facing away from you makes it easier for them to drift off.

Can You Train Your Dog How To Sleep?

If the bum in your face position is bothering you, you can always train your dog on how to sleep. We recommend taking their feeling of safety into consideration, though. So, this would mean having their rear face your significant other or maybe a wall.

Once your puppy learns that they can sleep safely in this position, it won’t be an issue anymore. It will take a little bit of time and patience. Some dogs are stubborn, though, and you may just have to keep moving them as they settle in each night.

Why does my dog push up against me when sleeping?

When your dog pushes up against you while sleeping means that they’re claiming dominance over you and the territory around you, this also shows that they’re comfortable enough to claim territory, which can be a good thing.

However, if your dog exhibits this behavior between you and your partner, this may be a sign of dominance. It will need to be corrected, so it doesn’t become a problem later.

Should you pet your dog while sleeping?

Whether you should pet your dog while it’s sleeping depends on the dog in question. If you’ve had them since they were a pup, and they’re used to this while they’re sleeping, then it should be fine.

However, on the other hand, this could scare them. It’s best if you want to wake them up to do it verbally, so you don’t startle them if they’re not used to it.

Do dogs know when humans are sleeping?

Yes, dogs know when their humans are sleeping. If you notice that your dog sometimes barks while you’re sleeping, but they don’t when you’re awake, this is them trying to make you aware of what’s going on.