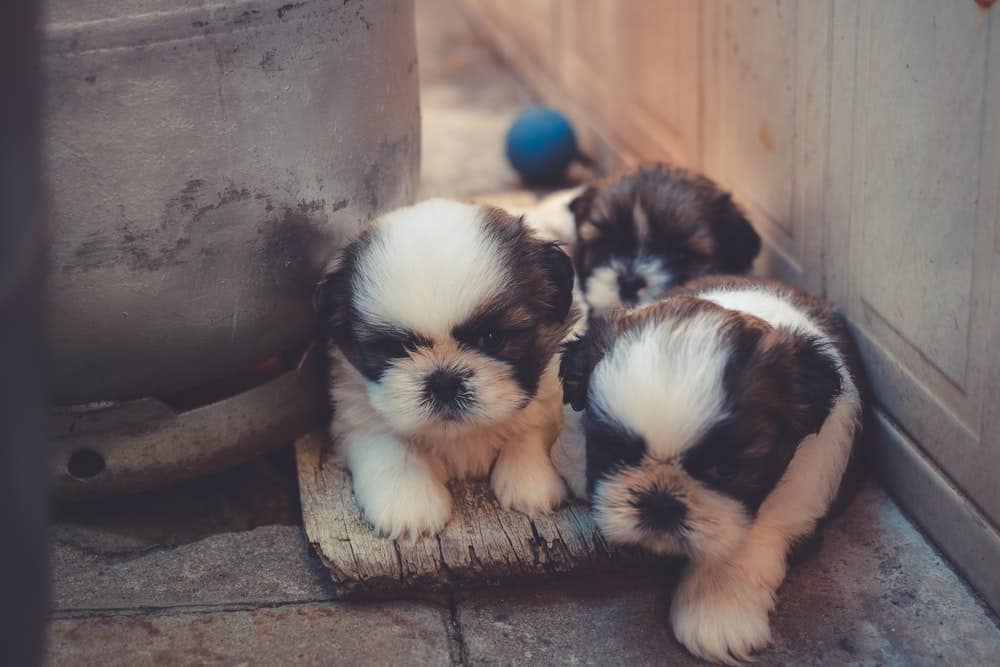 Dogs love to show affection in plenty of ways. One dog licking or kissing on another dog’s face is not uncommon. Dogs are affectionate not with just their humans but with their doggy companions on a day-to-day basis.

You may see your dog not only lick the face of another canine but particularly their eyes. Dogs lick each other’s eyes for grooming, affection, motherly care, and wound care, but monitoring the frequency is important. Dogs often tend to lick too much, as well as lick your eyes, sometimes causing more harm than good.

Dogs don’t just lick their buddy’s eyes, but they love to lick the nose, ears, and muzzle. It is just a common practice for dogs. Licking and sniffing is something that dogs do to introduce themselves and say hello, unlike why cats lick.

What Do Dogs Want When They Lick Each Other’s Eyes?

When a dog meets another dog, even in their own home, they meet and establish dominance. When your dog meets another, you may see one lower their head from the other one. Lowering the head is a sign of respect and timidness from the dog.

After meeting and establishing respect for each other, the licking and sniffing begin. Your dog or the other may lick the other’s face, particularly the eyes. It is a sign of acceptance and that they care for one another.

Licking the eyes and face ensures security and that everyone is taken care of. Mutually grooming and licking the face and eyes gives a sense of comfort. It’s just out of habit that your dog licks, and they want to be helpful.

Dogs lick as an age-old ritual that has been taught from dog to dog from birth and is instinctual. Licking their eyes is not different and can be a sign your dog wants or needs something. By understanding your dogs and how they read each other, you can figure so much out from one lick.

The Dogs Are Grooming Each Other

The bond between dogs can be an incredible connection. They are affectionate creatures that long for acceptance and love. They often thrive off a pat on the head and words of encouragement.

Your dog may lick your other dog’s eyes for grooming purposes. The eyes on a dog are hard to reach and keep them clean and free from dirt. Eyes can get wet, dirty, and crusty from just being a dog.

Licking each other’s eyes is usually a pack mentality. It is a bonding experience between wolves and dogs in a pack in the wild. They can communicate and love just through a simple grooming ritual.

Dogs are just a bundle of fur and pure love. They have a strong connection to their humans and fellow housemates. They might lick your face or even that of your house cat.

In showing affection, licking the eyes is a sign that they love the other dog, especially if they live together. If your dog is licking your other dog’s eyes, do not discourage it since it symbolizes love and acceptance.

The fact of the matter is there is nothing better than getting a ‘kiss’ from your dog. Any other dog feels the same when it comes to getting licked. It can be soothing and essential to building their bond.

A mother dog is a common and fanatic licker. They lick their puppies’ bodies, ears, and especially their eyes. Eyes are a sensitive part of their bodies and need protection from germs and debris.

Even though puppies’ eyes are not open when they are born, they are still prone to dirt and infection. Mothers will lick and clean their faces to prevent milk crusts from forming. Keeping their eyes free and clear to open at any time is key to protecting their eyes.

After puppies’ eyes open, it is a bonding experience between a mom and her pups to lick each other’s faces. Mother and puppies form a special bond and use their saliva for identity and protection.

Every interaction between a mother and her puppies is to help with stimulation. In licking her puppies, she helps them develop into well-rounded dogs and teaches them proper behavior. Licking their eyes teaches them what they will do with other dogs as they grow and bond.

There is no doubt that a dog licks wounds. Their OCD tendencies have them cleaning and licking wounds constantly. An injury to their eyes is no different.

As stated before, eyes are a difficult part of their face to reach with their long tongue. Another dog or housemate may assist in cleaning a wounded eye. Dog saliva has healing anti-bacteria that help in clotting and healing a wound.

To lick a wound is an instinctive trait for your dog. When your dog smells blood or certain tissue, it can send your dog into care mode. They will lick other’s eyes till that wound is healed but watch for excessive licking and infection.

When you see your dog licking their mate, you may see its eyes close. If they have a wound, this technique of licking causes endorphins to be released. Licking helps your dog to feel calm, happy and relieved of pain.

When Is Licking Another Dog’s Eyes Too Much?

Even though their saliva has healing properties and the ability to help in clotting, licking can cause problems. Too much licking can prevent a wound from healing properly. Along with delayed healing, it can also cause bacterial infections and reopen wounds.

Especially around the eyes, licking can cause some detrimental issues in healing. Eye tissue is more sensitive, and recovery takes longer. Therefore, prolonged licking can inhibit proper healing or cause more problems with their eyes.

Your dog excessively licking your other dog can also cause loss of hair or cause recurring infections. Licking is a sign that your dog is anxious or stressed, and your other dog may be paying the price. Talking to your vet or finding another activity for your dog can prevent excessive licking.

Why Does My Dog Lick My Eyes?

When you think of your dog licking your face, you feel warmth and love that beams from both of you. The affection is much like a connection in a movie. Dogs love humans, humans love their dogs, and in return, dog loves to lick their human.

Dogs can’t stand when you cry, but they do love the salty tears that stream down your cheeks. Dogs show that they care through licking and your face along with your hands are the most common. Little dogs, like your shedding chihuahua, are most likely to be up licking your face while you watch TV.

Much like how a dog grooms another dog out of love, they want to do it for you too. Grooming is a way for showing affection to you and to include you in their pack. You are their companion, and it is in their nature.

If you don’t want your pup licking your face, try redirecting them to your hand, and reward them with a treat. But, if you’re okay with a few puppy kisses, just let them do it.

A final thing may be just as simple that they enjoy the way you taste. Of course, they don’t want to eat you, but they love the smell and taste of you. Licking you is just an obsessive thing; they may have to get closer to you.

Why does my dog lick their paws?

As with anything, there are plenty of reasons why your dog licks their paws. Licking can be due to injuries, environment, and allergies. It is a common practice for your dog to lick their feet when something, as simple as dirt, bothers them.

Allergies are the most common reason for paw licking. Their skin gets irritated, especially between the toes, and can cause constant licking. Licking their paws can also be just out of anxiety and boredom.

Why does my dog lick the floor?

Dogs often lick the floor when they are anxious or bored. Dogs long to be stimulated and played with and when boredom takes over, licking the floor is a good treatment. In contrast to licking, pacing, shaking, and turning could be other habits.

If your dog seems to be licking the floor too much, taking them for a vigorous walk may help. Helping to distract your dog can also help to slow the licking and work their stress out. It also gives you and your pup an activity to do together.

Why does my dog lick other dog’s ears?

Licking another dog’s ears is just what dogs like to do. It’s something they do just to integrate another dog into their pack. Much like licking their eyes and nose, it gives them a sense of acceptance and bonding.

In a pack, grooming, licking, and sleeping together is a common practice that bonds a group of dogs together. Cleaning ears is also a sign of dominance and can establish a pattern of hierarchy.

Licking the ears, though bonding, can also cause problems or be a sign of one. If your dog has a yeast infection in the ear, your other dog may constantly be cleaning it. However, licking too much can also cause an infection and other problems.