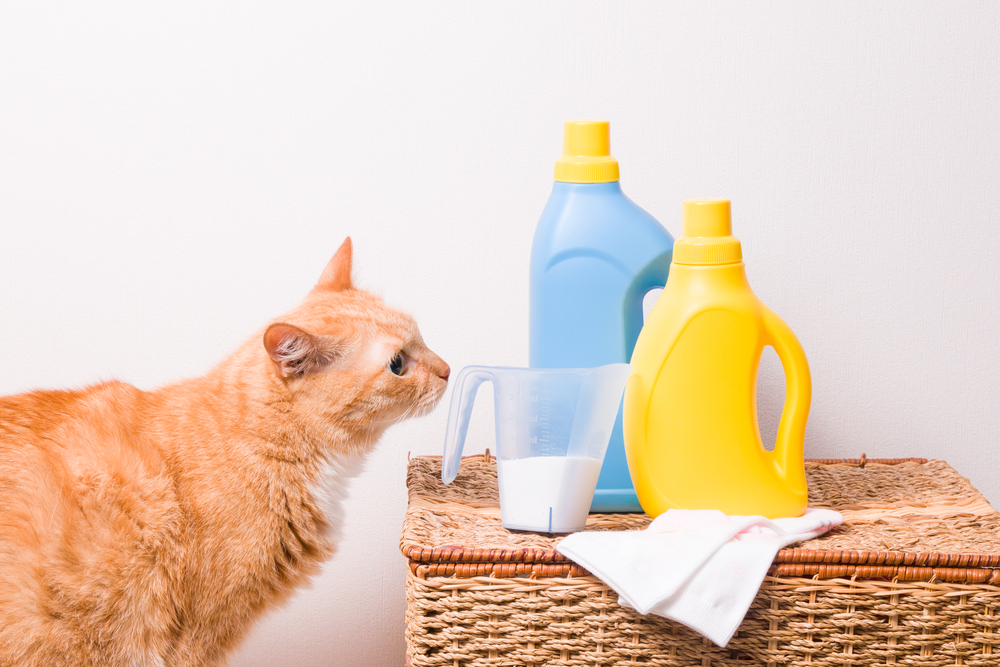 Have you noticed your cat seems to be a little too attracted to your cleaning products, especially bleach? Does your kitty like to hang out around the mop bucket and sniff the bleach container? Or maybe your furry friend refuses to leave after you’ve just finished bleaching the countertops or scrubbing the floors?

The mixture of scents (particularly chlorine) within bleach likely reminds your feline friend of pheromones released during mating. They can also resemble those compounds and odors within cat urine. The similarities between these things and bleach are why cats are so attracted to it.

Three Main Reasons Your Cat Likes The Smell Of Bleach

Cats have a highly keen sense of smell, and when they smell bleach, they pick up on a scent that they find particularly enticing. When your kitty smells bleach, they might start rolling around, sniffing it, and displaying other signs of joy.

But why do cats like the smell of bleach so much? There are three popular reasons.

The most likely reason for your cat’s love of bleach is that the scent mimics their mating pheromones. They start acing all hot-and-bothered either because they’re excited or puzzled. They smell mating pheromones, but there’s no other cat around.

Bleach Has A Catnip Effect

The chemicals in bleach can trigger a reaction in your feline friend similar to catnip. It can temporarily alter your kitty’s brain chemistry, giving them a temporary high in a matter of speaking.

Bleach Puts Your Cat On Alert

When your cat smells bleach, they could be confusing it with a potential intruder or unfriendly cat. Cats are very territorial, and this assumption can make them instantly start to try and mark their territory. So, they’ll begin to rubbing on everything to reinforce their claim to the area.

To you, it might look like they’re ecstatic about the smell. But cats have tons of scent glands throughout their bodies, and cats will rub on things to mark their property.

Of course, bleach features various chemicals, mainly chlorine, that can also cause reactions in your cat.

Cats already have a stronger sense of smell than humans. Chlorine probably smells differently to them than it does to people. The smell of chlorine, like the smell of bleach, probably resembles those pheromones previously mentioned.

These chloride aromas can mimic that released during sexual behavior and drive your feline friend wild.

Most cats are attracted to chemicals that mimic pheromone smells, such as bleach and ammonia. Many cats behave differently around these chemicals or scents.

This probably isn’t true for all cats, though. All cats aren’t attracted to things like catnip in the same way. Bleach smells likely don’t affect 100% of cats in the same way either.

If your cat is neutered or spayed, the desire to reproduce would be diminished, and sex pheromones might not have the same impact.

Will My Cat Drink Bleach?

Even if your cat is attracted to bleach, they probably won’t drink it. Your cat might lick at the bleach, soon realizing this is a bad idea. Pets that ingest a small amount of bleach might vomit once or twice before returning to normal.

Even if your cat licks at the bleach once or twice, they likely won’t ingest enough to cause deadly burns when vomiting. However, it’s essential to monitor your cat closely if you think they ingested bleach.

What Does Bleach Do To Cats?

Bleach is a very corrosive chemical and can do the same to cats it can do to most other animals ingesting it. Bleach is not safe to swallow or drink. Then you have to account for the much smaller size of a cat compared to a large dog or human.

Bleach can cause severe chemical burns to both the esophagus when swallowed and the rest of the digestive tract. Vomiting is a normal response to an irritant in the stomach.

Bleach can cause further chemical burns to your cat’s esophagus as they vomit it up. If your cat only licked up a tiny amount of diluted bleach, they should be fine when vomiting.

Why Is Bleach Dangerous to Cats?

Bleach is a corrosive fluid, damaging to the lungs, eyes, and skin for both animals and humans. If consumed, it can burn cats from inside the gastrointestinal tract and esophagus.

What Are The Symptoms Of Bleach Poisoning In Cats?

Ingesting bleach could result in gastrointestinal and respiratory issues with your cat. You’ll likely see drooling with vomiting, the frequency depending on how much your cat ingests.

Here are the symptoms of bleach poisoning in cats:

How Is Bleach Poisoning In Cats Treated?

Extreme exposure to unusually large quantities (for a cat) is considered an emergency and needs to be treated by a veterinarian immediately.

Most cases of bleach poisoning in cats won’t be lethal, and you can treat them at home. If your cat ingested just a small amount of bleach, they might not vomit at all.

Encourage your cat to drink milk or water, helping wash out any harmful chemicals left in the GI tract. Preferably water as cats really shouldn’t drink too much milk.

If your cat has difficulty eating after consuming bleach, you should take them to the vet ASAP.

Can Smelling Bleach Hurt A Cat?

Most of the time, the simple smell of bleach can’t hurt a cat. Simply smelling something dangerous is usually harmless unless the scent is very concentrated. Excessive exposure to bleach can theoretically damage a cat’s olfactory receptors.

Chlorine gas, on the other hand, can be lethal if inhaled. Ammonia and bleach can produce chlorine gas if combined (also very dangerous to humans).

Several cleaning products have ammonia as an ingredient, and mixing them with bleach is sometimes done by accident. Ammonia is also a component of cat urine.

Can Ammonia Hurt A Cat?

Since cat urine has high ammonia levels in it, you might think it’s okay for cats. This is usually true most of the time. Ammonia usually just smells bad (to us) and typically won’t cause a problem.

However, very concentrated ammonia is dangerous. Imagine many cats living in a closed area with very poor to no ventilation for an extended amount of time. This has happened in past cases of animal neglect.

Exposure to very concentrated quantities of ammonia from cat urine can become dangerous. When is the last time you’ve cleaned your litter box? In all seriousness, your cat urine situation needs to be pretty extreme to reach this point.

What If My Cat Walks Across A Wet, Newly Bleached Floor?

A dog living in the UK was actually poisoned after walking across a newly disinfected floor and licking their paws. Thankfully, the dog survived.

As long as you dilute it properly, such a small amount of color-safe bleach likely won’t be lethal. You might see some contact dermatitis (inflammation of the skin) from the chemical. You’ll still want to clean your cat’s paws with mild soap and rinse with cool water.

The best way to treat this is to avoid the situation. Make sure your cat can’t access the room until these surfaces are dry.

What If Bleach Gets On My Cat’s Skin?

How Do I Use Bleach Safely Around My Cat?

Keep your cat away from the room you are cleaning. Either shut your cat in a different room of the house or use safety gates (assuming your cat won’t jump). Do you have a doorway you are able to close?

What Disinfectant Is Safe For Use Around Cats?

You can use non-ionic or anionic liquid detergents safely around household pets. Anionic detergents are synthetic detergents and are less caustic or corrosive than bleach. If you’re having trouble finding a product, simply plug ‘anionic detergent’ into your search engine.

You can also further dilute bleach with water if you must have something antibacterial. In fact, you should always dilute bleach and never use it at full strength.

What should I do if bleach gets in my cat’s eyes?

Rinse your cat’s eyes thoroughly with clean, cool tap water for around five minutes. You want to wash out as much of the caustic substances as you can. Then seek veterinary attention.

My veterinarian is booked, and I can’t be seen until next week. What do I do?

If your cat has ingested a dangerous chemical cleaning product, this isn’t a ‘wait until it is convenient’ situation. If you are fortunate enough to speak to a veterinarian, they will likely recommend an emergency clinic.

You can also contact animal poison control (ASPCA Animal Poison Control Center: (888) 426-4435), but you might find yourself waiting to speak to someone. Time could be of the essence if you suspect bleach poisoning.

If your cat is vomiting profusely or there is blood in the vomit, your cat is seizing or passed out, don’t wait. Get to your local animal emergency hospital as soon as possible.