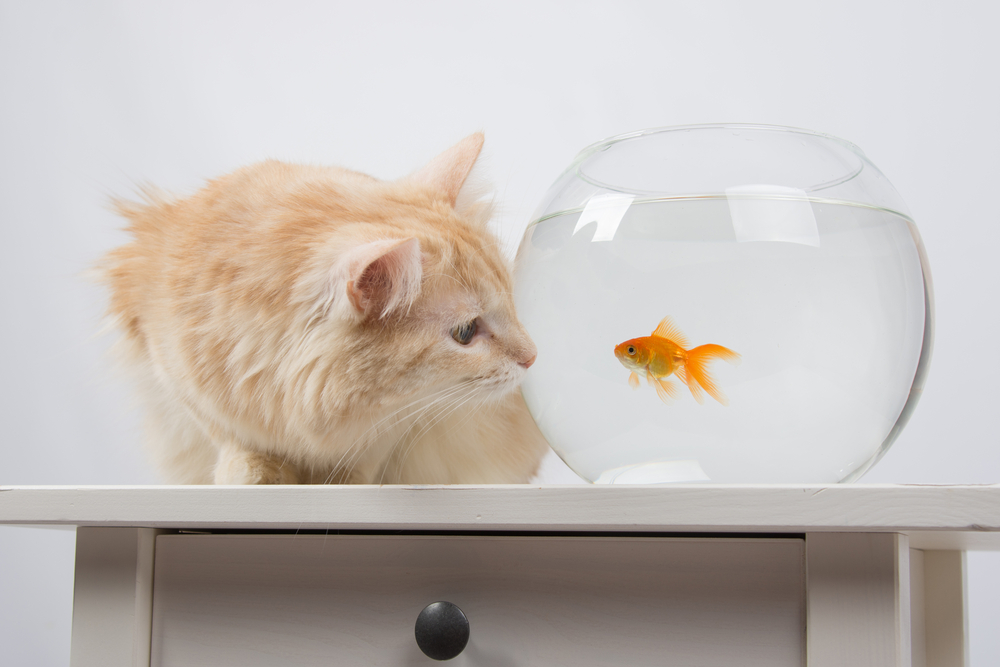 It’s been a belief that most of us have also taken on; that cats love fish and that they go great together. You see it in commercials, TV, movies, and even in cartoons. But have you ever wondered why cats like fish?

Cats like fish because they evolved with mankind, who caught and prepared the fish throughout time. Therefore, the cats have acclimated to the same taste for fish as humans have. Also, cats are opportunistic eaters and will eat everything readily else that’s available, especially fish, because they love the smell.

In this article, we will talk a bit more about why cats love fish and what fish is and is not okay to feed them. That way, your furry feline friend can enjoy their favorite foods, including their seemingly favorite creature of the sea.

Cats have been glorified in movies and stories for doing whatever to get that treasured fish and then devouring it whole, bones and all! You might be shocked to learn that not all cats enjoy seafood. Yes, some cats aren’t fond of fish.

Cats Love Fish Due To Their Evolution

Although the so-called domestication of cats is said to have begun in the Middle Eastern deserts some 10,000 years ago, cats started to prefer fish when they were first attracted to the houses of ancient Egyptians who frequently served fish.

Also, because of their co-evolution with mankind, cats have discovered that they may easily indulge in the fish captured by men and save energy by not having to hunt.

Cats are famous for devouring whatever source of food is easily accessible in their environment, including food given to them by people such as fish bones, leftovers, and waste found on roadways and in trash cans.

Cats Love The Smell Of Fish

Cats’ sense of smell is 9 to 11 times stronger than yours or ours, even though they have about 470 tastebuds and have limited ability when it comes to smell and taste.

Even so, cats seem to be attracted to strong aromas, including fish. This draws up their curiosity, naturally, so they want to taste it and continue exploring the smell. Animals can be weird sometimes; thankfully, most fish aren’t dangerous to cats.

Several animal owners have stated that their cats do not eat fish. Whether a cat likes fish or not is dependent on the food preferences of each cat. It’s also possible that some cats haven’t been exposed to a fish-based cuisine before.

Some pet owners report that their creatures will not eat salmon or tuna, while others say that their cats love pork or chicken products as opposed to fish.

Just as cats have their personalities like humans do, they also have their own preferences, which means some may love fish while others don’t. Or, some may be carnivores, while others might hate meat.

What Types Of Fish Are Safe For Your Cat?

If your cat isn’t allergic to fish, you can feed it to him. Tuna and salmon are the most recommended types of fish to eat since they are high in Omega-3 and fatty acids. These fish, on the other hand, contain a lot of mercury.

Smaller fish, such as flounder, halibut, and cod, are safer for cats to eat since they contain less mercury. Because of the high sodium concentration in canned salmon, take extra precautions when serving this type.

Advantages Of Fish For Your Feline

How Often Can Your Cat Eat Fish?

According to cat experts, you should only feed your cat’s fish 2 to 3 times each week. This is because, in addition to taurine and protein, which are key nutrients for cats, fish also contains thiaminase, an enzyme that breaks down thiamine, or Vitamin B1, which is an important part of a cat’s dietary needs.

If your cat does not get enough thiamine, it can weaken its central nervous system and ultimately result in death. However, fish typically contains mercury, which is hazardous to cats in considerable amounts and can cause urinary tract infection (UTI) and hyperthyroidism.

Therefore, the experts believe a happy medium to be two to three times a week. Any less than that can result in deficiencies while any more than that can raise the risk of mercury toxicity.

Cats Should Only Eat Fish In Moderation

Cats should only be given fish in moderation because the latter contains heavy metals and toxins such as flame-retardant chemicals and mercury.

These toxins could cause a thyroid disorder which may lead to muscle wasting, excessive metabolism, and even death.  Also, farmed fish are heavily treated with antibiotics that remain in the fish’s flesh.

Though cats enjoy tuna, canned tuna is not suggested for ingestion since it lacks critical minerals such as calcium, fat-soluble vitamins, and omega-3 fatty acids that cats require.

Vitamin E deficiency has been linked to oil-preserved tuna, leading to steatites, a painful inflammatory illness. Tuna is also renowned for having high amounts of harmful mercury and selenium. In conclusion, canned tuna is not the healthiest supper for your cat, but it can be a tasty treat on rare occasions.

Can Cats Be Allergic to Fish?

Cats develop allergies and can have allergic reactions just as people can. In fact, fish is one of the top three allergens that exist in a cat’s diet.

When your cat is allergic to fish, it’s usually because the histamine in the fish causes a sensitive and sometimes allergic reaction from the cat.

Signs Of A Seafood Allergy In Cats

There are several signs to keep an eye out for if you think your cat may be allergic to seafood. Some of these symptoms include:

If you notice any of these issues, then your cat should be seen by a vet immediately. That way, it can get the treatment it needs.

Tips For Feeding Your Cat Fish

Precautions When Feeding Fish To Your Cat

Do cats prefer meat or fish?

You can offer your cat either one to see what they prefer if it’s not made with any grease, oils, or seasonings. You can feed your cat either wet or dry food. And keep in mind that while many cats love fish, it’s not suitable for daily eating.

What fish do cats love the most?

While salmon and tuna are excellent sources of Omega-3 fatty acids, they are also high in mercury. That’s not to say that your cat cannot enjoy them, but they should be used sparingly.

A better choice for your feline would be flounder, anchovies, or halibut, as these aren’t so high in mercury but are still a significant source of the healthy fatty acids needed for your cat’s health.

What meat should you never feed your cat?

You should never give your cat raw eggs, meat, or fish, as this can cause food poisoning due to the bacteria that they contain. Also, the raw fish will destroy the thiamine your cat needs. This can lead to a severe neurological problem, ad end in a coma or death.