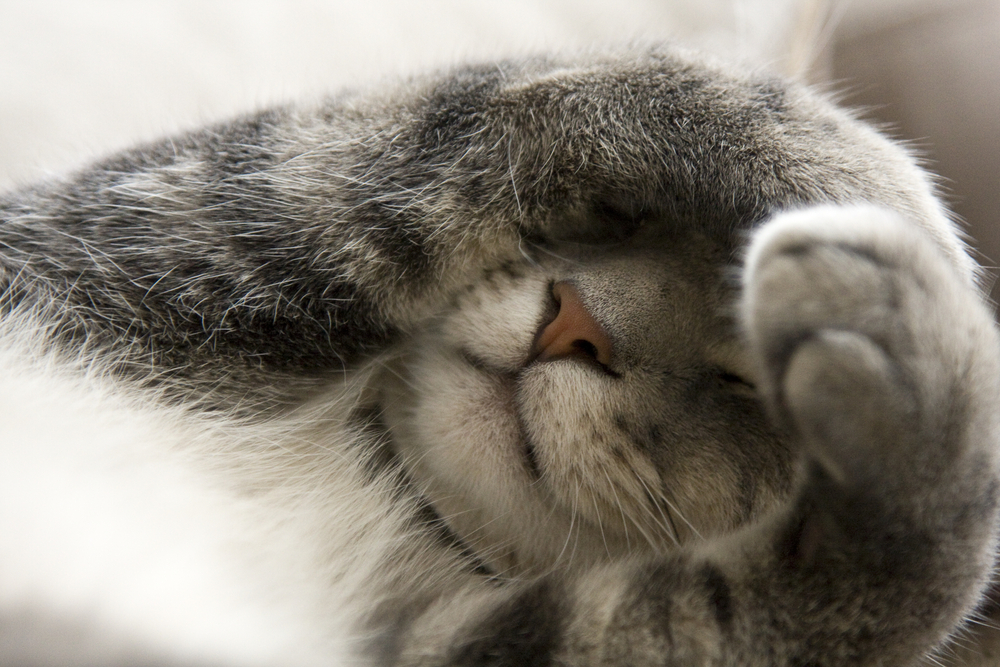 You see your cat asleep on the floor in a puddle of sunlight. They stir and pull their paws to their face, curling them over their eyes. It’s an adorable gesture, but why do all cats do this?

Sleeping in odd positions is characteristic for cats. While we may not understand all of the odd things our pets do, that doesn’t change our love for them. Read on to learn some possibilities for our fuzzy friend’s behavior.

7 Reasons Why Cats Cover Their Eyes

There are seven basic reasons why your cat may be covering its eyes. To learn more to help you determine which one fits your pet, keep reading.

Cats are what is known as crepuscular. That means that they do the majority of their activity at dusk and dawn. Their visual acuity helps them to see best in the low light of these times.

Whether they are hunting prey in the wild or toys in a home, cats exert lots of energy while hunting. This is a key reason that cats sleep for upwards of fifteen hours a day.

During the day, the most likely reason for this behavior is that your pet is blocking the light. Cats love to lie in the warmth of the sun, but this has a drawback. The bright, warming light also can make it difficult to sleep.

Curling up with the tip of their tail or their paws over their eyes solves this problem. It’s similar to how people use sleep masks. Covering their eyes blocks the light and allows them to rest.

Some cats will also seek out dark places to nap, such as underneath furniture or in a secluded spot. Don’t let this behavior worry you; it is absolutely normal. They just want to get a good nap in.

Cats Cover Their Eyes For A Sense Of Security

While cats are predators, they are also prey to animals larger than them, like coyotes and hawks. Because of this, their instincts tell them to sleep in places where they have shelter or cover.

Instinct also tells them to sleep during the day when nocturnal predators won’t be prowling for a cat-sized snack.  Remember that a cat’s face is one of their most vulnerable areas. In the wild, an attack to the face could leave it unable to hunt.

This would impact any predator’s survival. When lying on a sunny window sill, one of the few ways cats have “shelter” is to cover their eyes. This makes them feel perfectly safe, despite providing no real cover.

Some cats like having an actual cover, though, and will snuggle in a blanket or the corner of furniture. The addition of furniture or coverings also helps them absorb heat, which is also a critical factor in a cat’s sleep.

It is even possible that your companion will change their sleep schedule to mirror yours. Their relationship with you is that important to them. Sleeping with you makes them feel more secure.

Covering Their Eyes Gives Cats A Sense Of Comfort

Different cats like to sleep in different positions because it makes them feel comfortable. What is comfortable changes with each individual animal. They have unique wants and needs.

Some cats like to sleep stretched out, with their arms above their heads. Some cats sleep in a little ball, with the tip of their tail in their face over their eyes. Others sleep on their side, paws twisted up over their face, like a child playing peekaboo.

Sitting upright is also a popular position for cats to sleep. Some cats may lean their face into something.

Not all cats do any of these behaviors. If your cat doesn’t sleep “normally,” it is not something to worry about. Animals will do what comes naturally to them.

Your Cat Is Trying To Maintain Heat

Sometimes, what appears to be your cat covering their eyes is a result of something else. For example, curling up into a ball helps cats to conserve heat. Just as humans will curl up to get warm, so will cats.

Most living creatures use energy to create heat. So, to conserve energy, it makes sense that cats would curl themselves up. By taking up less surface area, there is less area heat can escape from.

Your cat can’t get a blanket off the shelf to warm up when they get cold. So, it makes sense that they would nap in a sunny place, curled up to hold heat and save energy.

Your Cat Is Actually Blocking Out Noise

The same way light affects sleep, so does sound. Cats react to most small sounds, even something we would ignore.

Humans often sleep better with soft, ambient noise. The same is not true for cats. Noises mean a change in their environment, and that could mean danger.

Housecats have a better sense of security and will attempt to block ambient noise they recognize. Sometimes their paws will twist up and pull down on their ears, covering their eyes at the same time. This shuts out those sounds and allows for a deeper, more relaxed sleep.

Your Cat Is Covering Their Eyes Out Of Sheer Exhaustion

While cats sleep for most of the day, they are extremely active when they are awake. They stalk around their territory, looking for playmates or even enemies to fight. They hunt, whether for food or fun, and after a meal, they groom.

Just as humans, when tired, will sit down and accidentally fall asleep, so will cats. Cats don’t just sit down, though. They settle down to complete an act, like grooming, and then doze off mid-bath.

Maybe that paw on your kitty’s face is just where he was in his bath after dinner?  It is a possibility your companion was just so tired they fell asleep.

How Can I Help My Cat Sleep Better?

When you want your cat to sleep deeply, there are ways to help them achieve a more relaxed sleep. The key to this is to make conditions as ideal as possible.

Provide your pet with a warm, comfortable place to sleep. This will help them to conserve energy and stay warm, but also feel secure and relaxed. A cat bed or even just a designated space for them is a great first step.

Add in a rigorous play session. Whatever your feline’s favorite toy is, get it out, and play until your cat is tired. This simulates the experience of hunting.

After a play session, provide food. Once their stomach is full and digesting a satisfying meal, their instinct to conserve energy will kick in. They will most likely seek out that safe, comfortable place now.

Once your cat has settled into their bed or spot, turn off the light for them, and reduce any ambient noises that may cause them to stir. As your beloved pet drifts off to dreamland, watch them dream and think about how much you love them.

Why do cats sleep so much?

Cats are, first and foremost, predatory animals– including housecats. As such, their bodies are hardwired to sleep the majority of the day.

This helps them store up enough energy to spend when they are hunting prey. Once they catch and eat that prey, they go to sleep. During that time, their food is broken down, and turned into more energy, that they use for hunting,

House cats still have this instinct, despite being provided with food. They expend energy by playing with toys and other animals in the home. Then they nap to build up more stamina for their running, jumping, and pouncing.

Why does my cat tuck their feet under?

Cats tuck their feet underneath them as a signal that they feel safe. If they’re sitting like this, it will take more time to get their paws and claws ready to defend themselves. It’s a cat’s way of telling you they find you trustworthy.

Most cats sit this way when they are relaxed and at ease. It also makes their body take up less space and holds heat. Bodies use energy to make heat, so this is a cat’s natural way of preserving energy.

Can my cat see in the dark?

There are two types of photoreceptor cells in the eye. Cats have a higher amount of rod receptors and a low amount of cone receptors. This is the opposite of the human eye.

This difference is why cats cannot see in color. It also is what helps cats to see better at night than humans can. Cats can see using one-sixth the amount of light that it takes humans to see.

While it may seem like your cat has super vision, in the complete absence of light, they also cannot see. They can see with much lower amounts of light than a human. This makes us think that they can see “in the dark.”