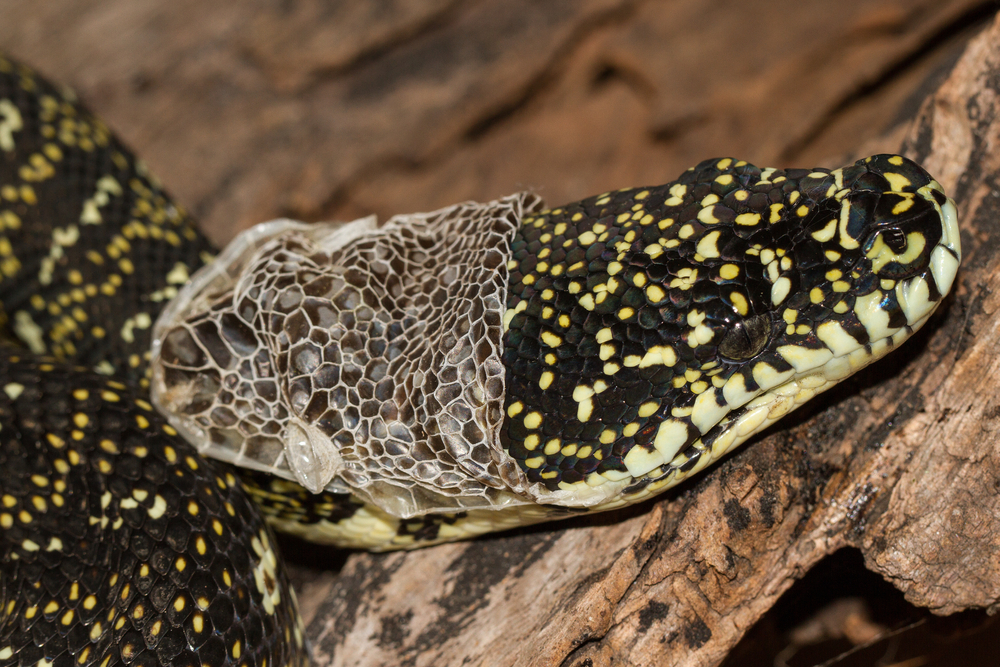 Snakes find shedding season unpleasant and inconvenient. It’s the same for snake owners who don’t know what to anticipate or how to aid. Usually, this isn’t a factor that people take into consideration when they’re thinking about getting a snake as family pet. So, how often does a snake shed?

There is no precise timeline for when a snake sheds; however, it depends on the species, environment, and the age of the snake. They will shed their skin when they become too big for it. This usually takes place three to six times a year or every six to eight weeks.

We’ll go over everything you need to know about snakes, starting with the topic that drew you here in the first place. That way, you feel better prepared to deal with your snake’s shedding. We’ll also share tips on how to help him when the time comes, so you don’t feel so caught off guard.

How Frequently Do Snakes Shed?

It’s hard to give a precise time frame because when a snake sheds, it relies on many elements, including the snake’s species, environmental circumstances, and, most importantly, its age. Snakes develop throughout their lives and lose their skin when they become too large for it.

On average, this occurs three to six times every year, or every six to eight weeks. Because the pace of development decreases as the snake becomes older, it will shed less as it ages.

A snake’s skin does not expand with them as they grow, unlike our skin, which does. Instead, a new layer of skin develops beneath the top layer, and when the snake has outgrown it, it sheds it to expose the bigger new skin beneath.

Skin shedding also aids the snake in getting rid of parasites and other skin problems. The snake’s skin releases some fluid between the old and new skin just before this process begins.

This helps the snake prepare for the significant shed by separating the old and new skins. It also causes the skin to become grey and the eyes to become blue.

How Can You Tell If It’s Time To Shed?

As previously said, the old skin starts to become gray as the time to shed approaches. You’ll also note that the snake’s eyes are blue or grey in color. This is due to the snake’s discharge of the fluid as mentioned above between the two layers of skin.

When you observe the snake’s gray skin and darkened eyes, you know it’s time for it to shed. The behaviors of the snake begin to shift as well. The snake will want to remain hidden more because of its inability to see and the discomfort it experiences before shedding its skin.

During this period, the snake is essentially blind because of the fluid and the weakening of the previous skin (try to imagine liquid and a layer of skin over your eyeball). It will become a little slow and will hide more than normal. During this period, it’s important not to bother your snake.

The eyes and skin of a snake clear up around four days before it starts shedding. From the time the skin goes gray, and the eyes turn blue until the snake finally slides out of its old skin, the entire shedding process takes roughly a week.

Snakes require moisture to shed successfully. Make sure there’s plenty of humidity and fresh water available. A large enough water dish or a humidity box, which is just a place to hide filled with wet moss, should be provided for your snake.

The snake prefers to keep its skin wet as it prepares to shed. When it’s time to start the actual shed, the snake will soak in water for a few minutes to loosen the skin.

Then it starts shredding the shed by pressing its head against something hard. This necessitates the presence of rocks, logs, or branches in the enclosure. The snake begins to shed its skin.

The snake can begin to crawl out of the old skin after it has made a tear in it. The skin peels off from the inside out and, ideally, in one piece. The fact that the skin covers even the eyeballs may startle you the first time you see it.

How Long Does It Take For A Snake To Shed?

It takes around 30 minutes for a snake to lose its skin. Some have taken as long as 6 hours. It all depends on the snake’s size and age.

Snakes shed most of the time near their homes. Snakes don’t venture far when it’s time to shed since they’re typically uneasy around this time and prefer to stay close to home.

Incomplete shedding is referred to as dyssecdysis. It’s generally the result of a habitat issue or a health issue with the snake.  To initiate the shedding process, make sure your snake has surfaces to brush against. If it has those, ensure certain the humidity levels and temperature are within acceptable standards.

The majority of shedding issues are caused by low humidity. Before the shed, make sure your snake has access to fresh water to soak in. It’s most likely a health concern if there’s nothing wrong with the habitat.

Dysecdysis can be caused by parasites, nutritional insufficiency, or an infectious illness, among other things. You should take your snake to a veterinarian to see what ailment it may be suffering from. Shedding problems can also be caused by stress.

As previously said, snakes get uneasy when they are about to shed their skin. They will become agitated if you annoy them during this period by handling them, etc. Lack of hiding places also creates tension, so make sure you have several nice snake hides on hand.

Eye Caps That Have Been Retained

An unfinished shed with retained eye caps is a type of incomplete structure. The skin around the eyes does not shed in this area. Make sure the eye caps are present in the shed skin at all times. If your snake still hasn’t shed its eye covers, you’ll see holes where the eyes used to be.

Eyes And Head Of A Snake

The eye caps may be seen in the shed snakeskin. As more layers of unshed skin pile up, this is increasingly prevalent in older snakes and can finally result in the loss of an eye or blindness. If you find that your snake’s eye caps haven’t shed, you can take it to the doctor to get them removed.

You can also remove them yourself if you know what you’re doing, although this puts snakes in danger. Using tweezers to remove the eye cover, for example, can result in the entire eye being yanked out of the socket!

Using a q-tip soaked in natural mineral oil is the most effective approach to remove an unshed eye cap. Apply the oil to the whole eye cap with the q-tip.

Then, using a q-tip and additional oil, apply a second coating of oil to the eye cap. In most cases, this is all that is required. Within 24 hours or so, the eye cap will snap off on its own. If it still doesn’t work, try the mineral oil treatment again and wait another day. Bullsnakes are prone to this problem.

Tail Skin That Has Been Retained

Another frequent shedding problem is when all of the skin on the tail falls off except for the tip. You should get rid of it since a subsequent shed might cut off the circulation to the tail, resulting in the tail’s loss.

Fortunately, getting rid of the skin that hasn’t been shed is simple. Simply immerse the snake in water for about 15 minutes to soften the unshed skin, then peel it away from the tail.

In rat snakes, this is a prevalent problem.

Will My Snake Bite Me If It’s Shedding?

Some snakes can be highly irritable during the shedding process because it can be pretty stressful on them. This might be an uncomfortable time, so it’s best to try and avoid bothering them unless they seem to need help out of the skin they’re trying to shed.

We recommend leaving your snake alone and not handling it while it’s in the shedding phase. This means not handling it for several days and not removing it from its habitat. Remember to provide it with plenty of water and feed it as you usually would.

Once your snake has finished shedding, feel free to handle him as normal. His behavior and attitude should return to normal when the process is finished. If your snake still seems to be a little ‘off,’ it’s essential you get him to the vet as soon as you can, as this is an indication of a possible health problem.

Also, if your snake happens to bleed and appears to be in pain during the shedding process, you will need to bring him in as soon as possible. Remember not to peel the shed off! That’s very important. A lot of shedding issues with snakes are caused by human error.