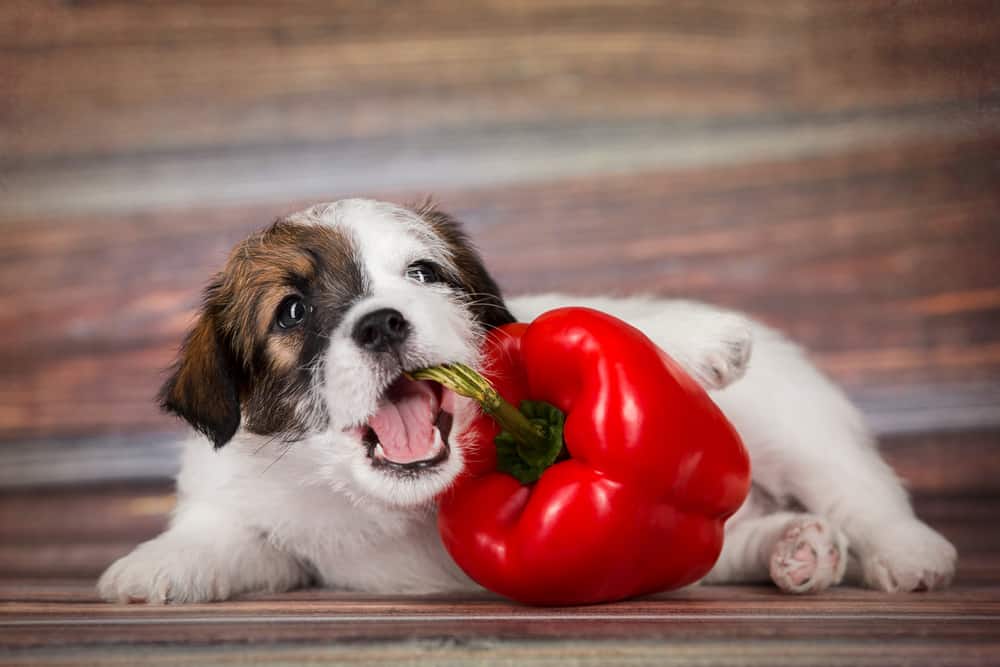 The answer to the question, “Can dogs eat peppers?” depends on which type of peppers are to be fed to the dog. Some peppers may, in fact, be a healthy snack, while other varieties are best avoided.

The most common type of peppers fed to dogs as a snack are bell peppers. Other names for this pepper include called sweet pepper or Capsicum. These peppers are great as a healthy snack for humans, but are they safe for dogs?

Dogs can eat bell peppers, and many dogs love them! Bell peppers can be a healthy, low-calorie treat for dogs and also provide some important vitamins and minerals. Other pepper varieties, such as jalapenos or serrano peppers, should be avoided and may even be dangerous for dogs to eat.

Safe Peppers To Feed A Dog

Many dogs enjoy fruits and vegetables as alternative snacks. These alternatives can aid in weight loss and also provide healthy nutrients to your dog. However, it is imperative always to ensure that the treats you are feeding your dog are not toxic.

Despite having “pepper” in the name, bell peppers are non-spicey and also non-toxic to dogs. These peppers can provide a healthy snack with few calories. These may be especially helpful as a treat for a dog that needs to lose weight.

However, if you are considering feeding other peppers to your dog, you may want to reconsider. Peppers that are spicy or hot, usually dependent on the amount of capsaicin in them, may cause gastrointestinal upset and burns to your dog’s mouth and intestines.

Bell peppers are the only type of pepper I suggest that owners feed to their dogs. Bell peppers are safe and healthy for dogs as they contain the least amount of spiciness of all the pepper varieties.

Spicy peppers, such as jalapeños or chili peppers, can be extremely hot and spicy. These varieties of peppers are much different than bell peppers and should not be fed to dogs as a treat or snack.

Bell peppers have very little capsaicin in them. Due to this, they are among the mildest peppers in the Capsicum genus. This blandness allows them to be suitable as a snack for your dog.

There are varieties of peppers that should never be fed to dogs. These include:

Capsaicin is the organic compound found in peppers that gives them their spicy and hot taste. Though all peppers belong to the same genus, Capsicum, they all have different amounts of capsaicin in them.

Capsaicin is an organic compound, and it can wreak havoc once ingested. Capsaicin acts as an irritant when eaten or when it comes into contact with the mucous membranes.

This compound will produce a burning sensation on contact or upon ingestion. The burning can affect the skin, eyes, mouth, and the internal digestive system.

Peppers that contain high capsaicin levels are stronger irritants and, if eaten or touched, will cause a burning sensation to the dog or human.

If a dog (or human) consumes a pepper that contains a high level of capsaicin, they may experience gastrointestinal upset such as vomiting, stomach pain, and diarrhea. Eating these peppers may also cause burns, mouth irritation, and other adverse effects.

As a snack, bell peppers are actually very healthy. These peppers contain high levels of vitamins A, B6, C, E, and K. Bell peppers are also rich in carotenoids such as lutein, capsanthin, beta-carotene, and flavonoids like quercetin and luteolin.

Vitamin A, lutein, and other carotenoids have a beneficial effect on eye health. Vitamin C can help enhance immune system function, and vitamin B6 functions to support healthy nervous tissue.

Vitamin E is used to maintain and improve a dog’s skin and coat. Additionally, studies have shown a possible beneficial link between beta-carotene and arthritis. This discovery could lead to beta-carotene being utilized as a treatment for arthritis and other inflammatory conditions in elderly dogs.

Though dogs usually get all of their needed dietary requirements met by eating commercial dog food, bell peppers fit the bill if a pet parent is looking for a healthy snack. These peppers are much more nutritious than a calorically dense, packaged dog treat from the pet store.

Feeding a few bites of bell peppers to a dog is safe, and though the added healthy nutrients may not be necessary for the dog’s diet, the peppers can be a tasty treat.

In the instance that an owner is cooking at home for their dog, it is important to work with a veterinary nutritionist to ensure the diet is balanced and appropriate for the dog’s life stage. Bell peppers can be used in home cooked dog diets as a healthy addition.

Which Bell Pepper Is Best For my Dog?

If you have decided to feed a bell pepper to your dog as a snack, treat, or part of their main diet, it can be hard to know which bell pepper variety to choose. Bell peppers are available in most grocery stores and can be purchased in green, red, orange, and yellow varieties.

In general, red bell peppers usually contain the highest amounts of vitamin C and vitamin A and may also contain more beta-carotene. The green, yellow, and orange varieties are healthy as well, so it often simply depends on which color the dog enjoys the most!

How Many Bell Peppers Can I Feed My Dog?

How many bell peppers a dog can eat is highly dependent on the dog. Bell peppers should always be given as a snack, treat, or a small portion of the dog’s diet.

As with any new food, it is essential to introduce the food slowly and watch for any dog’s adverse reactions. Many dogs can eat bell peppers daily with no issues, while others may have sensitive stomachs and suffer digestive upset with just a few bites.

It is unlikely that a pet parent would feed too many bell peppers to a dog, but it is essential to remember that a wholesome, completely balanced dog food must always be a dog’s main diet. There are many options for this, but treats and snacks should never comprise more than 10% of the dog’s total diet.

If more treats and snacks than the recommended 10% are fed to a dog, they may not feel hungry enough to consume their regular diet. This may lead to nutrient deficiencies and illness.

While bell peppers by themselves are safe and may make a healthy treat or snack for a dog, it is vital to never season the pepper with salt, spices, or garlic. Salt and garlic are toxic to dogs and cause serious, life-threatening illnesses if consumed in large quantities.

Pre-packaged mixes containing bell peppers may also contain onions, which are also toxic to dogs. These mixed products and any bell peppers that have been cooked with onions should never be fed to dogs.

When determining the amount of spice a dog can handle, it is essential to consider a dog’s tolerance level and not your own. Though many people greatly enjoy the taste and spice of peppers such as jalapenos and chili peppers, dogs tend to be much more sensitive to spice.

As discussed previously, feeding a spicy pepper to a dog can result in not only unpleasant gastrointestinal side effects but also may cause oral and esophageal burns. Watch carefully for these signs if your dog gets into the trash or accidentally ingests a spicy pepper. If any distress is seen, the dog should be taken to the nearest veterinarian as soon as possible.

Though black pepper is not toxic to dogs, most dogs do not like the taste. Black pepper is spicy and also functions as an irritant. From a health standpoint, there is no reason to add black pepper to a dog’s food, and doing so is likely to cause gastrointestinal issues and irritation.

Dogs should not ever eat onions. Onions are toxic to dogs and, if eaten in large enough quantities, can cause a life threatening illness called hemolytic anemia. The onions cause a small protein called a Heinz body to be inserted into the dog’s red blood cells. The dog’s immune system then sees the red blood cells as “foreign” and therefore destroys them. If left untreated, these dogs become severely anemic and may die.