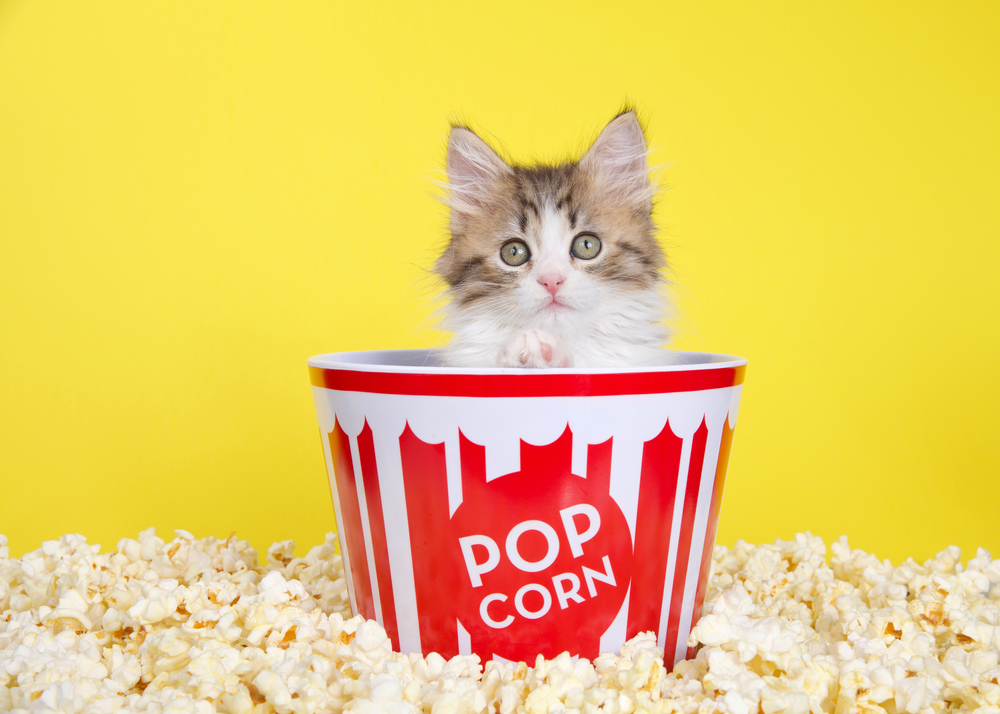 I have only met one person that does not like popcorn. Popcorn is a great treat to choose whether you are studying, watching a movie, or just need a quick snack. This crunchy delicacy is universally loved for its warm yumminess and salty or buttery goodness.

Popcorn is safe for cats to eat, and plain popcorn can make a great quick treat. Popcorn is not toxic to cats. However, there are some dangers to be aware of, and some cats may not enjoy this high-fiber snack in its plain form.

If you are watching a movie on the couch and your cat sneaks some popcorn out of the bowl or grabs a few bites that you accidentally drop on the floor, there is no need to worry.

It is, however, essential to be aware of the toppings you have put on the popcorn and that if your cat eats too much, this could be dangerous.

Also, a cat’s gastrointestinal system is not accustomed to human food snacks, so you may see some tummy upset. This is highly cat dependent as some cats do pretty well with a varied diet, and others will get ill if they eat anything other than their cat food.

The issue of whether or not popcorn is healthy may be somewhat species-specific. For people, popcorn is a wholesome snack with many health benefits.

If you ask a nutritionist, they will tell you that popcorn is made from the whole grain, making it a healthy choice. It is also packed full of both soluble and insoluble forms of fiber, which is great for gastrointestinal health. Lastly, popcorn contains vitamins B1, B3, B6, and many minerals, including potassium, zinc, and magnesium.

Popcorn contains antioxidants, and these compounds, known as polyphenols, have been shown to improve circulation, relieve stomach and intestinal distress, and even reduce the risk of both prostate and breast cancer.

Polyphenol antioxidants are found in a number of other fruits, vegetables, and grains. However, because popcorn is low in moisture (only 4% water), the compounds are more concentrated in popcorn. This makes the snack potentially a potent cancer fighter.

Popcorn as a snack is deeply embedded into American culture. There are many varieties, from salty and buttery to sweet kettle corn; popcorn is found in homes and at events all over the country.

Holidays and sporting events would not be the same without popcorn. Americans like to eat this warm, crunchy treat with a variety of toppings, and even molded into round balls and other shapes with syrup!

However, as popular as popcorn is in the United States, we were not the original inventors of this delicacy. Scientists have found small bits of popcorn in Peruvian tombs dating back over one thousand years!

It has been widely told that popcorn was actually included in the first Thanksgiving feast in Plymouth Colony. According to the story, the famous Squanto first showed the Pilgrims to plant and harvest corn as early as 1621. It is believed that he taught them to heat and pop the kernels, making popcorn!

Sadly, this story, though fun, is likely not historically accurate. The early Pilgrims at Plymouth did plant and grow corn, but it was a variety of corn that could not be popped. This corn, the Northern Flint variety, is a delicate, small kernelled corn that would not have been suitable for making popcorn.

There are no accurate historical accounts of settlers making or eating popcorn. The first mention in the literature of popcorn came almost 200 years later in a fictional piece published in 1889.

Though it is clear that the early Pilgrims did not eat popcorn at the first Thanksgiving feast, the exact time and place of origin for popcorn is not certain.

There are writings from French explorers describing the popping of hard corn kernels in handmade pottery jars. They used sand to heat the jars and to get the kernels to pop.

These French explorers settled in the northeast region of North America, including what is now New York, Vermont, and parts of southern Canada. These were most likely the first Americans to indulge in popcorn as a snack.

In the mid to late 1800s, popcorn was a very common snack for families as they gathered to relax. The snack was also widely seen at picnics, parties, and other social functions.

In the late 1890s, popcorn really took off, becoming widely available and enjoyed. This popularity came about due to the invention of the first popcorn popping machine by Chicago entrepreneur Charles Cretors.

This invention came about when Cretors, a candy store owner in Chicago, bought a peanut roaster for his store. He wished to offer fresh roasted peanuts to his customers.

The peanut roasting machine did not work as intended to roast peanuts, and Cretors retrofitted it into a popcorn maker.

Years after this incident, Cretors went on to design new machines for popcorn popping that were steam-powered. These machines and the steam ensured that all kernels were evenly heated, which gave consumers the most popped kernels possible.

In the early 1900s, Cretors began selling popcorn in horse-drawn popcorn wagons. This, along with the popcorn popping machine, brought about a dramatic increase in Americans’ popcorn consumption.

It is estimated that today, Americans eat about a million pounds worth of (unpopped) popcorn a year.

Cats can eat popcorn. Popcorn (itself) is not toxic to cats.  There can be issues when toppings are added to the popcorn, and there is a slight possibility of popcorn being a choking hazard.

The most popular toppings for popcorn in the United States are butter and salt. These toppings may cause an issue if a cat eats too much popcorn.

Salt, in large amounts, can cause sodium toxicity, which can be fatal. Butter is not toxic but may lead to intestinal distress in cats not accustomed to eating it.

Additionally, cats are obligate, or true, carnivores, and they do not require grains in their diets. This can lead to gastrointestinal distress when a cat eats large amounts of grains.

Small amounts of grains are acceptable, but large amounts can cause issues. This is why popcorn as a snack for cats should always be small nibbles of the treat.

If you are considering feeding popcorn as a snack to your cat, I suggest you stay away from the microwavable varieties. The inside of the bags containing prepackaged microwave popcorn are coated with perfluorooctanoic acid. This chemical has been shown to have adverse effects on human health; therefore, we want to keep from exposing our pets to it as well.

Another thing to watch for in terms of health is artificial butter flavor. This flavoring contains diacetyl which has been proven to cause lung cancer in animals when inhaled.

Can Cats Eat Other Types Of Corn?

The same rules apply to all types of corn, just like they do for popcorn and cats. Corn itself is not toxic to cats, but the toppings or things it is cooked with often pose a danger.

If your cat enjoys corn products, which many cats do, it is safe to experiment with some forms, always in small amounts. Some examples of corn products other than popcorn that your cat may enjoy include:

These treats should always be fully cooked and fed in small amounts. This will ensure that the cat is not fed a choking hazard, as well as limit any stomach or intestinal issues that may occur with a new food.

It is essential to bear in mind that the majority of every cat’s diet needs to be an appropriate cat food. Cats require at least 70% of their diet to be meat. Feeding a cat too many grain-based treats may fill him up and keep him from eating his cat food.

Other Healthy Snack Ideas For Cats

Despite being obligate carnivores, many cats enjoy fruits, vegetables, and grains. You can offer some healthy alternative treats to your cat and see if they like them.

Some vegetables that are healthy and may appeal to your cat are:

It is crucial to keep in mind that any treat should be a small addition to the cat’s diet. Treats, regardless of type, should never make up more than 10% of the diet of a cat.

Final Thoughts On Cats And Popcorn

Popcorn is not toxic for cats, and in moderation, can make a healthy and tasty cat treat. Care should always be taken to ensure there are no additives to the popcorn that could be dangerous or unhealthy for your cat.

Treats of any kind, including popcorn, should never be used as a replacement for the cat’s main diet.

As always, if you have any questions or concerns, call your cat’s veterinarian for professional medical advice.