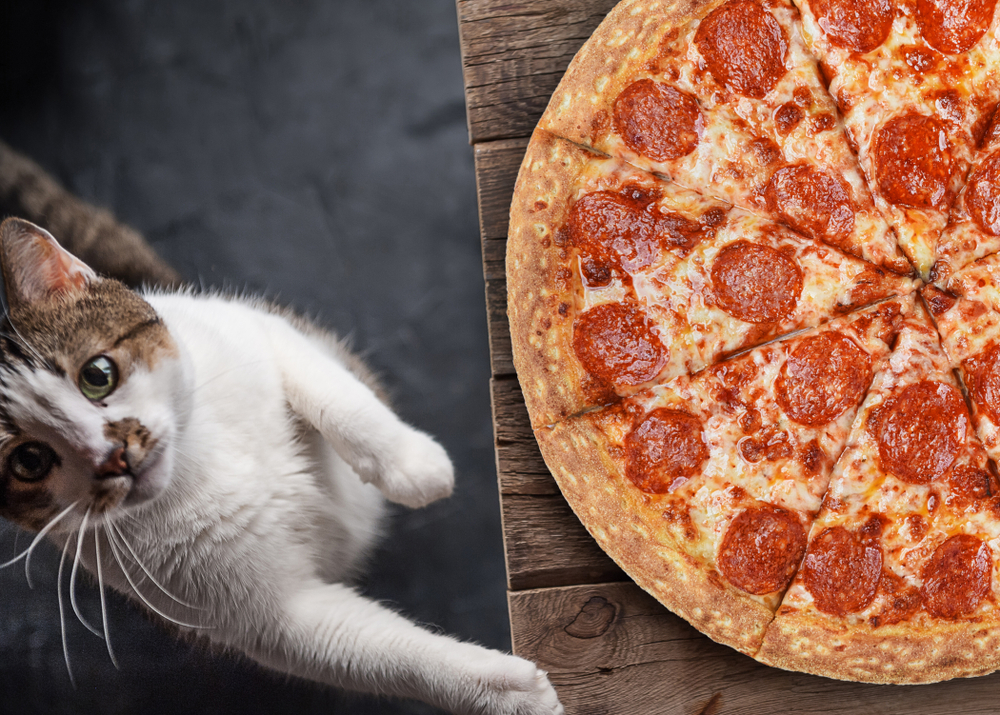 I love pizza. Who doesn’t love pizza? Of course, cats are no exception. Pepperoni is the topping of choice in my house, and my cats are always begging to share in the fun. As a veterinarian, my clients frequently ask me if they can share their pizza dinners with their cats as well.

Cats can eat pepperoni. Pepperoni is made mainly of meat and is not toxic for cats. However, it is highly fatty and also spicy and may not be the best choice for a cat as a snack. Pepperoni may be best left on your pizza and out of your cat’s reach.

It may not be the perfect choice of snack for your cat, but cats are sneaky. In my house, any pizza left unattended will have a cat nibling on the toppings within a matter of minutes. So, should a per owner be concerned when their cat eats pepperoni?

Cats are true carnivores and thrive on a diet that is greater than 70% meat. They genuinely have no need for grains in their diet.

Pepperoni is made up of almost exclusively meat, so as a basic foodstuff, it does technically fit the requirements for a cat’s diet.

Cats will definitely eat pepperoni if given a chance. The high fat and protein content appeal to a cat’s taste buds and make it attractive to them.

There are typically no toxic ingredients contained in pepperoni, either as a pizza topping or the packaged or deli variety.

Unfortunately, there are ingredients in the pepperoni that are not ideal for cats to eat. These include high levels of fat, protein, spices, and preservatives.

Some of these ingredients can cause stomach upset and other gastrointestinal upset such as pain, nausea, bloating, and diarrhea.

Below is a breakdown of some of the ingredients in pepperoni and their potential effects if fed to a cat.

Pepperoni And Your Cat

Pepperoni is made from a dried meat product consisting of beef and pork.

Pepperoni is currently the most popular pizza topping in the United States, and an estimated 50% of all pizzas have pepperoni on them.

What Does Pepperoni Contain?

Not all pepperonis are made precisely the same, but most are relatively similar. The exact percentages of meats, spices, and preservatives may differ slightly, but the main recipe is essentially the same.

Pepperoni is a dried meat product made up of mostly all beef and pork. This composition results in a product that is very high in protein.

The high protein levels found in pepperoni are much higher than appropriate for a cat’s daily dietary protein intake.

Pepperoni is made from fatty cuts of meat which increases and enhances its flavor and texture.

Unfortunately, most commercially made pepperoni products contain 30-35% fat, which is much too high for a cat’s diet.

One of the major flavoring ingredients in pepperoni is salt. Salt is essential to making the pepperoni flavorful and appealing to both humans and cats.

The chemical compound for salt is NaCl. The Na stands for sodium, and this is an important chemical to consider when feeding pepperoni to a cat.

The amount of sodium in a serving of pepperoni is high for a human but is astronomically high when you consider feeding it to a housecat.

Just one small pepperoni slice contains about 32mg of sodium. If you consider all of the slices on a typical slice of pepperoni pizza, there will be approximately 700 mg of sodium.

To put this in perspective, a typical 10 pound adult house cat should have 21mg of sodium a day. So, just one tiny slice of pepperoni as a snack will exceed their daily limit by 22mg!

This sodium overload would be dramatically worse for smaller cats, kittens, or cats with heart disease. Also, if the cat is allowed to eat more than one slice of pepperoni, the excess sodium adds up incredibly quickly.

If enough salt is consumed, it can cause a dangerous health condition called salt toxicity. Cats that have consumed large enough quantities of salt to become ill will show signs including:

Left untreated, or in very severe cases, the condition can be fatal.

If a cat eats excessive amounts of pepperoni or any food substance high in salt and exhibits any signs of illness, it should be taken to a veterinarian for an evaluation immediately.

Sodium nitrate (NaNO3) and its close relative sodium nitrite (NaNO2) are preservatives that you find in lots of processed meats.

These chemicals are added to the meat to inhibit bacterial growth, such as botulism, and to preserve the red color in the meat product.

These preservatives greatly extend the shelf life of the product. However, the research is unclear on the health implications.

Studies have shown high levels of these chemicals linked with stomach and colon cancer in lab animal studies.

The inclusion of these preservatives in pepperoni is another compelling reason not to feed pepperoni in large quantities to your cat as a treat.

Pepperoni wouldn’t make pizza nearly so mouth-wateringly yummy if it didn’t contain spices to make it taste so good. The pork and beef, ponce dried, are mixed with spices to add flavor.

All of these spices can wreak havoc on a cat’s more delicate digestive system. A cat that has consumed too much spicy pepperoni may vomit, have stomach cramping and pain, experience bloating, and have diarrhea.

Garlic is toxic to cats and causes a hemolytic anemia. Though it is unlikely that a cat could physically ingest enough pepperoni to cause garlic toxicity, it is a toxicity seen with other foods that contain higher quantities of garlic. Signs of garlic toxicity include:

The anemia caused by garlic will typically occur days to weeks after the ingestion of the garlic, as the cat’s red blood cells are destroyed. If the above signs are seen, and the cat was fed garlic or ate something containing garlic, the cat should immediately be seen by a veterinarian.

Alternatives To Pepperoni For Your Cat

Though pepperoni is not toxic and cats can eat it, due to its high fat, protein, and salt content, as well as the spices and preservatives it contains, it is not the ideal snack for cats.

Cats tend to be a little pickier than dogs, but there are still many foods in your home that are safe and will delight the taste buds of your feline friend.

The first thing to do is to think about your specific cat (or cats) and what they prefer. Some cats like fish while others prefer chicken. Some cats prefer dry and crunchy treats, while others love moist. Starting with the basics of your cat’s preferences is essential.

Always be careful to avoid anything toxic. Some common toxic foods to avoid are chocolate, caffeine, alcohol, grapes, raisins, garlic, onions, macadamia nuts, and anything with the artificial sweetener xylitol.

Store-bought treats are an option as well, as they are easy and safe. Be sure to limit your cat’s daily intake to 5-10% of their total dietary calories.

You may want to start by trying these readily available things in your very own kitchen! Just remember that all treats should be given in moderation to avoid weight gain and obesity.

Cats love cheese, and most tolerate it well in small amounts. You can try tiny nibbles of cheddar, Swiss, or muenster!

Ham, turkey, chicken… cats love them all! Whether you are sharing a bit of your lunch or last night’s dinner leftovers, a tiny bite of your main dish is sure to make your cat happy. Always feed the main muscle meat and avoid skin and spiced edges as they may upset your kitty’s stomach. Lean lunch meats and deli slices are a good option for meat treats as well.

Any cracker will work, though many cats prefer the cheese-flavored varieties such as Goldfish, Cheez Its, or Cheese Nips. These crackers are small and easily portable, and one should be more than sufficient for a cat-sized treat.

Easy to pack and take with you on the go, and definitely a favorite of even the pickiest felines, canned fish, including tuna and salmon, make enticing treats. I recommend the “packed in water” varieties instead of the “packed in oil” as they will be a bit healthier. These should always be given in moderation, as a treat, and never used as a substitute for cat food as they do not provide adequate levels of the nutrients a cat needs to stay healthy.