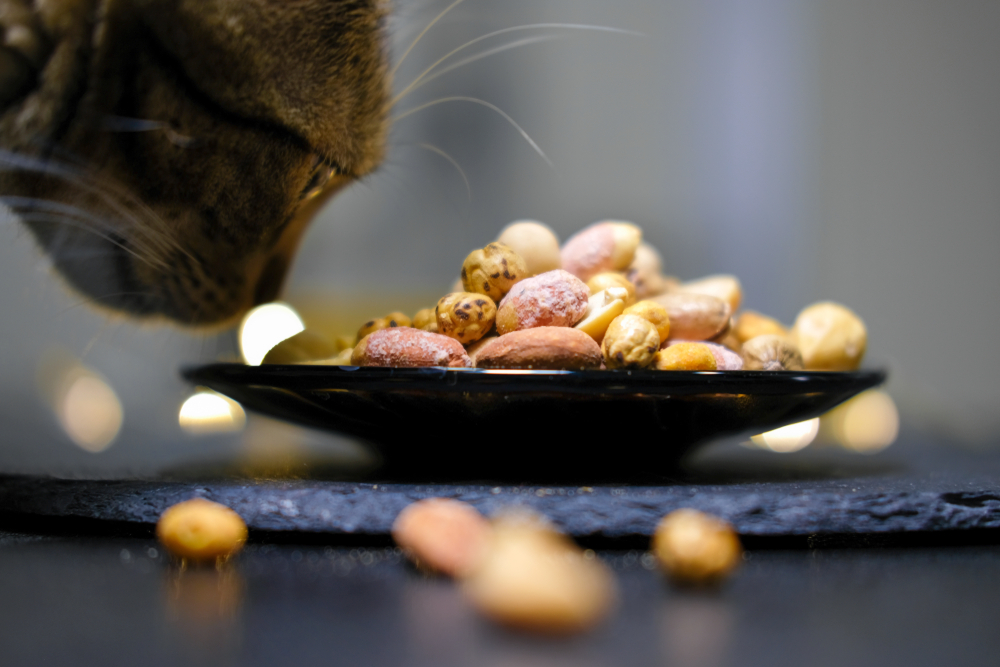 Nuts are crunchy, high in protein, and often covered by a light dusting of salt. In the middle of the day, they can be the perfect pick-me-up snack. What’s not to like? Well, your cat probably thinks the same thing.

Cashews may taste good to cats, but are they safe for them? This is a question I am often asked as a veterinarian in my day-to-day practice. In my experience, cats find cashews to be a very tasty treat and will likely indulge if given a chance.

Cats can eat cashews; they are not toxic for cats. However, cashews are not appropriate as a mainstay in any cat’s diet and, if given to a cat, should only be used as an occasional treat. Cats are true carnivores, and cashews are high in carbohydrates, which cats do not need in their diets. Cats need to eat mostly meat.

So, the next time you are snacking on a few yummy cashew nuts, it is safe to share a nibble with your cat. However, you may want to read on to find out more information about whether or not cashews make good snacks for cats.

Cashew nuts are delicious little packages of crunchy goodness that almost everyone loves.

Cashews come in many forms; snack nuts eaten whole, cashew butter for topping loaves of bread and crackers, crumbled and put on top of cookies, and baked into cakes and other dishes.

Cashews grow on trees that stay green all year round. The nuts are the seed of the tree.

The cashew tree originated in Brazil, and it is believed that the Portuguese were the first to begin exporting the nuts way back in the 16th century.

Cashews have a distinctive flavor that many describe as both salty and sweet at the same time.

In modern times, most cashews are grown in India, Vietnam, Nigeria, and the Ivory Coast.

The vast majority of cashews eaten in the world today are consumed in the form of whole nut snacks. The remainder are processed into nut butter and baked goods.

Cashews are a labor-intensive nut to produce due to the increased amounts of manufacturing required to process them.

There are many reports of forced labor and deplorable work conditions, as well as the exploitation of children in the farming and processing of cashews.

Regardless, as vegetarian and vegan lifestyles have become more popular, consumption of cashews has sky-rocketed around the world.

According to one report, global cashew production has risen tenfold over the past 50 years.

What Are Cashew Apples?

You may have eaten cashews a thousand times in your life and still never heard of the cashew apple. Grown on the same evergreen tree as the cashew, the cashew apple is an edible, sweet fruit that is very rarely consumed.

The cashew apple is small, typically growing to a size of only 2-4 inches in circumference. It is a red to yellow colored fruit.

The outer skin of this tiny apple is extremely thin and delicate, making it impossible to pack or ship outside of the regions where they grow.

In Latin American countries, the juice from the apples is extracted from the pulp and added to drinks and alcoholic beverages as a flavor enhancer.

So, should we be feeding cashews as a treat to our cats?

People are classified as omnivores. This means that we can eat a diet consisting of both plants and meat-based proteins.

On the other hand, cats are obligate carnivores, which means they require a high protein diet. A cat’s diet should be made up primarily of protein, with a small amount of carbohydrates added in.

Obligate, or true, carnivores, such as cats, need greater than 70% of the calories in their diet to come from meat.

This type of digestive system that cats have makes them unable to process or utilize the fiber and carbohydrates in cashews.

Additionally, if allowed to eat too many of the nuts, a cat may become too full and not want to eat their regular diet. This can lead to a deficiency in vital nutrients.

Are Cashews Bad For Cats?

Cashews are not toxic to cats. This is a fact that cat owners who feed little nibbles of the nut to their feline friends can take comfort in.

Luckily, due to the texture of cashews, the majority of cats will not eat a large enough quantity of the nuts to cause themselves any issues.

In humans, cashews, like all nuts, can cause allergic responses. This nut allergy has not been documented as an issue in cats, but it is possible.

If a cashew is given to a cat as a snack, the piece presented to the cat needs to be a small one to minimize the risk of choking.

More importantly, the overall number of cashews given to a cat needs to be minimal to avoid filling the cat up with calories that are not part of their required diet.

Cashews do not fit the dietary profile of a true carnivore. Cashew nuts contain 44% fat, 30% carbohydrates, and 18% protein.

Though cashews are considered a “healthy fat” and are likely a better choice for a snack (for us as well as for cats) than a fried or highly processed food, the nutrients are not what a cat needs.

Remember, cats are carnivores. They need to consume foods that are high in protein, moderate in fat, and low in carbohydrates.

When a cat eats a cashew, the most likely side effect is gastrointestinal upset, if there is going to be one.

Cashews are high in fat and high in fiber. These two things can result in vomiting, stomach pain, bloating, gas, and diarrhea in the cat that overindulges.

In cats that are sensitive to fat or eat excessive amounts of cashews, pancreatitis is a severe health issue that may be caused by feeding a cat cashews.

Pancreatitis occurs when the pancreas becomes inflamed and releases digestive enzymes inside the organ or around it instead of into the small intestine.

Clinical signs of pancreatitis in a cat include:

If your cat displays any of these signs after eating cashews (or at any time), please consult a veterinarian immediately.

Nut milk is made from the meat of the nut. The nut is soaked in hot water until it is soft, then it is ground into a paste and mixed with more water. Lastly, the mixture is strained, and the resulting liquid is the “milk.”

Unfortunately, for our health’s sake, after this processing takes place, most of the nutrients in the original nut have been removed or destroyed.

Cashew milk is not toxic to cats. However, cashew milk is very tasty to cats, and it may be hard to use it as an appropriate snack without giving the cat more than is good for them.

Cats are attracted to cashew milk due to its high fat content. As discussed earlier, high fat snacks can cause mild gastrointestinal upset, or worse, severe life-threatening illnesses like pancreatitis in cats.

Yes, cats can eat almonds. It is a myth that almonds that are for human consumption are toxic to cats and dogs. Much like cashews, they are high in fat and carbohydrates, and therefore not an appropriate part of a cat’s main diet. They are, however, ok for an occasional treat.

Many cats really enjoy the taste of salt (just as we humans do), and the addition of salt makes cashews all that much more irresistible. Unfortunately, in large quantities, salt is toxic to cats, so care should be exercised with feeding a cat salted cashews.

Final Verdict On Cats And Cashews

If your cat really loves cashews, an occasional nibble of the cashew nut or lick of cashew ice cream likely will be fine, but it’s best not to get into a habit you have to break in the future.

Also, considering the human rights violations that occur in the harvesting and processing of cashews, there are definitely better choices of treats for our feline friends.

Commercial treats explicitly made for cats are likely a much better and safer choice for your pet.