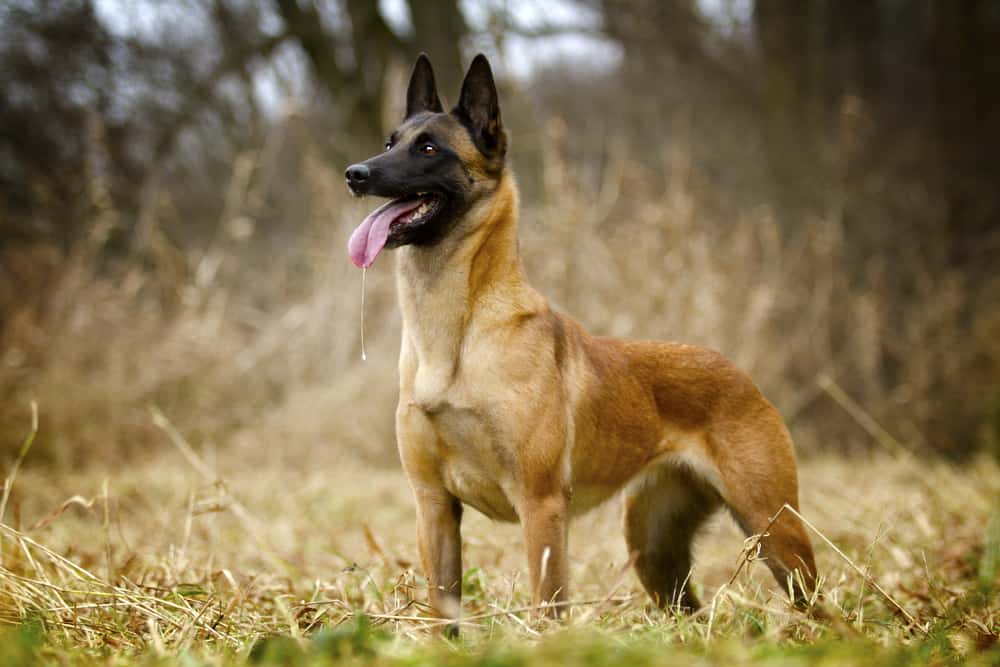 Between the beautiful coloration, incredible intelligence, and overwhelming need to please people, there is not much to dislike about the Belgian Malinois. This dog breed is frequently used by police and security forces worldwide because it is very easy to train and responds well to human authority. Many people incorrectly believe that the Belgian Malinois is aggressive by nature.

The Belgian Malinois is a high-energy, extremely intelligent, and easy-to-train dog. People frequently confuse the Malinois’ high energy with aggressiveness. This dog’s temperament is developed to please and obey people and to protect its family at all costs. Belgian Malinois can be trained to attack but ultimately are affectionate and loyal dogs.

Aggressiveness is a learned behavior, and many inept owners will train their Belgian Malinois to become aggressive toward people or other animals. Because of this dog’s incredible intelligence, it is not a good dog for a first-time dog owner.

The Malinois has plenty of energy and must be physically and mentally exercised daily to avoid developing nuisance behaviors like chewing, barking, and biting. If trained correctly, this dog breed can happily live with other animals, including cats, if given the right training and socialization.

How Can I Ensure My Belgian Malinois Remains Friendly?

While the Malinois can be a friendly and outgoing dog, it is important to harbor these desirable behavior characteristics and temperament early on. Keeping your dog friendly is a great way to ensure it remains non-aggressive and gets along well with other animals. To ensure your Belgian Malinois remains friendly, you should:

Can a Malinois Live with a Cat?

Pairing any animals together in a house is a delicate balance that requires plenty of training and positive reinforcement. Although the Malinois has a strong prey drive, this dog breed can live peacefully with cats. When it comes to housing a Malinois with a cat, it is key to have proper socialization and introduction practices. The Malinois tends to be aggressive toward other animals that it does not know or perceives as a threat.

If you plan on housing a Malinois with a cat, you may have more luck raising the two animals together. Pair a puppy with a kitten to have the most chances of success. Of course, every cat and dog is an individual with an individual personality. It is impossible to determine if every Malinois can learn to tolerate every cat. If a cat and dog do not get along, never force the issue.

Can a Malinois Live with Other Dogs?

The Malinois is an extremely trainable dog but certainly high intensity and robust. It is possible to house a Belgian Malinois with another dog, pending the dogs are either raised together or properly introduced and socialized with one another. Understand too that not every Malinois will like other dogs, and it really depends on your individual dog’s personality.

The high-intensity Malinois can often be too much for other dogs, prompting snarls and disagreements. Because the Malinois is very athletic and intense, fights between other dogs can quickly escalate if left to persist.

Is a Malinois a Good Dog for a First-time Dog Owner?

The Belgian Malinois is an extremely assertive and dominant dog that requires a kind yet strong owner. Training and commands must be stern and consistent yet positive and never forceful. Because of this dog’s extreme intelligence and high energy drive, they are not recommended for first-time dog owners.

Even owners who have had prior experience working with dogs should be prepared when they adopt a Belgian Malinois. This dog is extremely intelligent and requires constant attention and training.

Because the dog can become powerful and aggressive with the wrong handling, it is vitally important that a Malinois owner is prepared to administer the proper care and training to make a great canine citizen that gets along well with other animals and people.

What Makes a Dog Aggressive?

Dog breeds by nature will not be aggressive, however, certain dog breeds may possess a high prey drive. Dogs like terriers and hounds have been bred over centuries to hunt small animals, making them appear aggressive.

These dogs do have instinctive breeding to chase and pursue small animals but will generally not be aggressive toward people. Malinois are naturally protective of their family.

Other dogs, like the Belgian Malinois, are extremely intelligent and bred to obey people. Certain owners who want an aggressive dog may train their dog to attack other animals or people. Aggressiveness, in this sense, is a learned behavior and not something a dog is innately born with.

Undesirable aggressiveness is learned and cannot be a temperament assigned to a certain breed. Strong-willed and intelligent dogs, like the Belgian Malinois, occasionally have a bad reputation for being aggressive because of poorly prepared or incapable owners.

What Dogs Are Usually Friendly?

A Belgian Malinois is an intense dog that is only recommended for experienced dog owners. If you are searching for an easy-to-train dog with a wonderful and friendly personality, you may want to consider a more social dog breed. Some great options for a dog that gets along with other dogs and people include:

Can a Malinois live in an apartment?

Belgian Malinois are extremely high-energy dogs that need continuous mental and physical stimulation. If kept in a small area, this dog could become extremely destructive and prone to nuisance behaviors like chewing, digging, and barking without proper exercise. The Belgian Malinois is not a good apartment dog and should be kept in a home where it has access to a large yard to exercise and burn off its endless energy daily.

Does a Malinois make a good service dog?

One of the most desirable aspects of the Belgian Malinois is its extreme intelligence coupled with its eagerness to please its owner. This dog breed can learn multiple commands in a very short amount of time. The Malinois, however, is not commonly used as a service dog but instead used in other applications. It is common to see Belgian Malinois working as police dogs, military dogs, or even bomb-sniffing and substance detecting dogs.